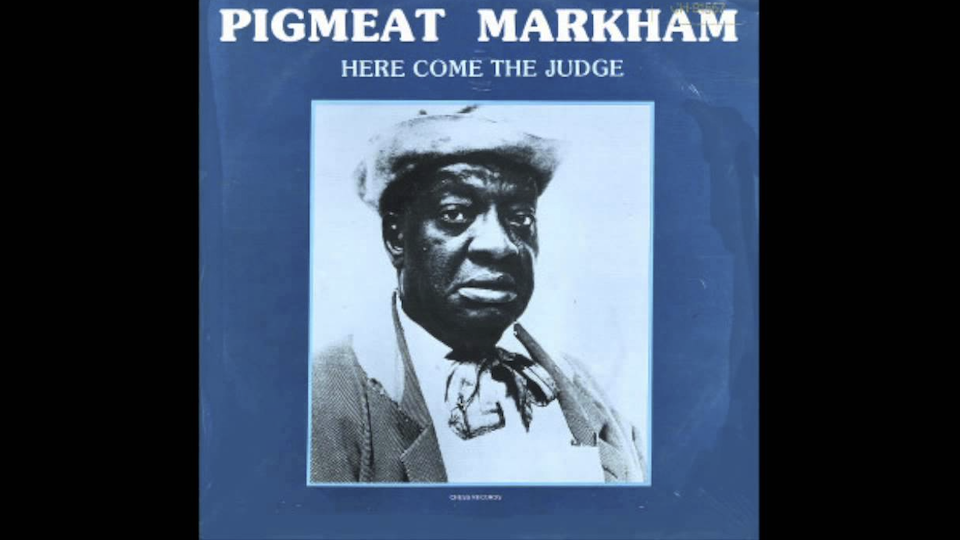 History often denies us a clear narrative, a point we all can agree on that something either began or ended. Music is no exception.

As much as most mainstream pop culture conscience is concerned, Rap music grew out of disco in the late 80s. “Rapper’s Delight” is credited as introducing the world to this new genre. Others favor “King Tim III (Personality Jock)” as being the first mainstream song in this style.

But to truly find the origins and backgrounds, we might have to dig deeper. It may not be the first true rap ever recorded, but to this day, “Here Comes The Judge” by comedian Pigmeat Markham, released in 1968 as an important precursor.

Dewey Markham, born on April 18, 1904, while an all-around entertainer who could sing, dance, and act, was best known for his comedy. His nickname came directly from one of his stage routines.

Entertainment, of course, was a completely different beast back in the first decades of the 20th century: he took part in burlesque shows and was also a traveling musician, and while not exactly a household name for mainstream audiences, he had the chance to make some brief film appearances.

Talking about Markham’s career at this point it’s almost like two worlds apart, but it’s often a reminder how small the world can be, and showbiz even more so.

Puns, wordplay, and fast-paced comedy were all there from the dawn of the art of making people laugh; a lot of routines like what the Marx Brothers made wouldn’t be that out of place on an old rerun from Seinfeld.

And yet, Markham’s style still stood out. While not exactly one of the greatest performers of his time, he found his niche, and as big or small as it might seem. he made an impact: “Here Comes The Judge” featured future soul singer Minnie Ripperton, best known for his 1975 “Lovin’ You” (though she was credited as Andrea Davis on the recording).  It also counted the participation of Maurice White, future founder of Earth, Wind & Fire. He surely seems to know how to find talent with huge potential.

The song was a modest hit, peaking at 19 on the Billboard charts in the year of its release, and it has been sampled and remembered in media, like Netflix’s Hip Hop Evolution. It definitely has its place in the history of the genre, and arguably, on the greater pop culture landscape as we know it today.

But one discussion arises: can we really say this was the first hit of the genre?

In a lot of ways, this is a bigger debate that can’t be contained to the boundaries of hip hop, but it leaks into what we consider the evolution and growth of art, in all styles and forms. At what point can we make and see a clear difference between one genre and another? When do the precursors become the founders?

That has always been one tricky part of art expression. There are no formulas or well-defined lines.

But one thing is for sure; Markham’s contribution is well-remembered, as it should be.

2 comments on “The Novelty Song That Kickstarted Hip Hop”