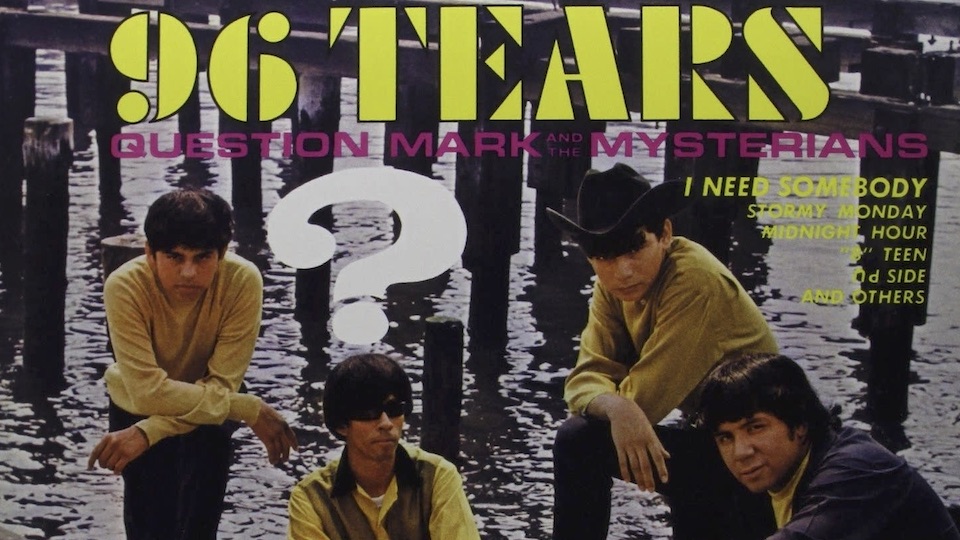 It’s not necessarily a bad thing to be known as a one-hit-wonder. ? and the Mysterians topped the charts in 1966 with the now-classic “96 Tears.” The song features an unforgettable organ riff and a distinctive lead vocal by the group’s sunglasses-wearing lead singer, Rudy Martinez. Once you hear the song, it’s tough to get it out of your head. The spare production and unique style of the tune has made it a long-time favorite of many rockers, especially punk bands like The Ramones, The Cramps, and X, who consider it something of a proto-punk anthem.

? and the Mysterians actually grew out of a trio from Michigan featuring Bobby Balderrama and Larry Borjas on guitar, and Robert Martinez on drums. They initially played surf music and guitar-based instrumentals in the style of The Ventures and Duane Eddy. After the British Invasion took the world by storm, the group added Robert’s brother, Rudy (aka “?”) as their lead singer, as well as keyboard player Frank Rodriguez. They borrowed the band’s name, The Mysterians, from the alien invaders featured in a 1957 Japanese sci-fi film. After Larry Borjas and Robert Martinez left the group for military service, the band recruited Eddie Serrato as a replacement drummer and Fernando Aguilar on bass, who was later replaced by Frank Lugo.

Post-“Tears,” ? and the Mysterians continued to play well-received live gigs in their native Michigan. The band’s music shifted to a tougher-edged rock sound, and the group began working on songs to record. The enigmatic “?” quickly became the central figure in the band, and his intense personality and offbeat stage presence greatly contributed to their success. He was fond of making unique proclamations, like claiming that he was from Mars, and often gave conflicting, yet profound origin stories for some of the group’s music. There’s no question that “96 Tears” composed by “?” and powered by that ingenious, carnival-like, Vox Continental organ riff (improvised by keyboard player Frank Rodriguez) is their most memorable song.

Originally released as part of a single (with the song “Midnight Hour”) in April 1966 on the independent label Pa-Go-Go Records, “96 Tears” quickly gained traction in Michigan and developed into a regional hit. The song caught the attention of record executive Neil Bogart, then president of Cameo-Parkway Records, who picked up the rights, and released the song nationally. “96 Tears” climbed up the charts and hit number one in October 1966. The band appeared on shows such as American Bandstand and Where The Action Is to perform their big hit. This song was everywhere. Contemporary cover versions were recorded by The Music Explosion, Jimmy Ruffin, and Aretha Franklin. Yes, you read that right: even The Queen of Soul recorded “96 Tears.”

While subsequent releases didn’t match the success of “96 Tears,” the band did have two more singles land in the Top 100, “I Need Somebody” and “Can’t Get Enough of You, Baby” which was later covered by Smashmouth. During the 1990s, with the rights to their music tied up by infamous record executive Allen Klein, the band actually re-recorded their debut album (including “96 Tears”) in its entirety, though their original recordings were later successfully released on CD and digital formats. Over the years, the band has reformed and regrouped in various configurations, always led by “?”. “96 Tears” is certainly one of the most indelible singles of the 1960s. In 2014 it was declared Bay City, Michigan’s official rock and roll song by then-Mayor Christopher Shannon. It was also recognized by Rolling Stone as #213 on their list of the 500 Greatest Songs of all Time.