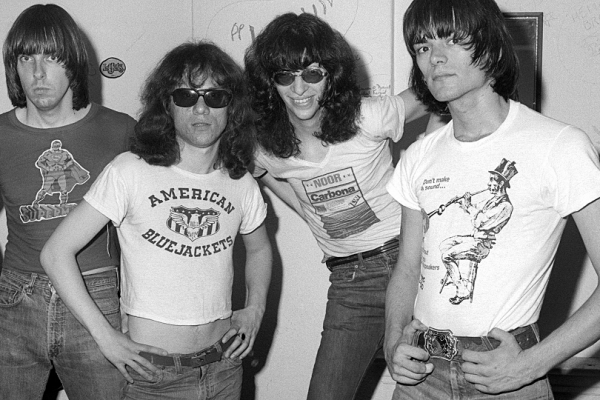 In April 1976, Sire Records released the debut album by a new band called The Ramones. Johnny, Joey, Dee Dee, and Tommy Ramone, the darlings of The Lower East Side, were now recording artists. It was done over one week for just $6,400. And it was a flop, selling only around 6,000 copies in its first year. Thirty-eight years later, it finally went Gold (500,000 units sold) making it the only one of their 14 studio albums to do so. Around that same time, it was preserved by The National Recording Registry as ” culturally, historically and aesthetically significant”.

Their debut project changed the face of popular music with classics including “Blitzkrieg Bop,” “Judy is a Punk” and “Now I Wanna Sniff Some Glue.” Its influence can be heard and felt in every rock and roll record made since its release 43 years ago. But is it the best Ramones record? Maybe.

Some think it’s terrible. I don’t. Does it make you “bop til you drop”? No, but that’s OK. They’re going for it, Ramones-style. At one point, they believed they were gonna be The Beatles or The Bay City Rollers and guess what? – it didn’t happen. This album was 13 years later, ’cause they kept going even after most people said, “Who cares?” Life’s crazy, and so was everyone in this band (“A lot of mental illness,” to quote Johnny). That’s what this album is about. Showing up even when life seemingly sucks. This record deserves its own documentary and everyone involved deserves a big hug. This was technically Dee Dee’s last album with the band but he goes out in style with “Don’t Bust My Chops”  and “Ignorance is Bliss.”

Despite containing the good-time fun of “Rock ‘n Roll High School,” this album just hangs there for me.  Yeah, it SOUNDS great, but what Phil Spector record doesn’t sound great? Maybe that’s the problem: too much polish, not enough soul. Until the day he died, Dee Dee claimed that he didn’t play a single note on this one. He also said Spector never let him play his pinball machine. Hmm…Is this really The Ramones or just an incredible simulation?

My favorite thing about this album (aside from how great a song “Poison Heart” is) is that the Ramones purchased it, plus two other songs from Dee Dee, in exchange for bailing him out of jail.

Every song on this album is terrific, so why isn’t it higher up on this list? I’m gonna go with Johnny Ramone, who blamed the producer. “Graham Gouldman? Who’s Graham Gouldman? He’s in 10cc- he shouldn’t be producing a Ramones record- it’s ridiculous.” Check out the demos instead.

Their final album is thoroughly enjoyable from start to finish. It opens with a fun cover of Tom Waits’ “I Don’t Want to Grow Up” (a minor hit for them which they got to perform on Late Night with David Letterman) and ends with Dee Dee’s guest-vocal cameo on” Born to Die in Berlin.” Joey’s two songs on this album are among the best he wrote- “Life’s a Gas” and the weird and beautiful “She Talks to Rainbows.”

If cover songs are what you dig, then this is for you. Made up entirely of covers from the ’60s, they range from Creedence (“Have You Ever Seen the Rain?”) to Jan and Dean (“Surf City”). The single from the album was The Who classic, “Substitute” featuring backing vocals by none other than Pete Townsend (who apparently showed up late for the session, just long enough for Johnny to say, “Fuck it, I’m going home.” Which in true punk rock fashion he did).

This record is epic, from the guitars (courtesy of Johnny Ramone and Walter Lure who may be uncredited but who plays most of the leads on this record) to songs like “Psycho Therapy” and “Highest Trails Above.” Joey’s singing becomes REALLY epic: listen to his phrasing on The Chambers Brother’s cover, “Time Has Come Today.” Mind-blowing.

This record rates high for me for several reasons.  Among them:  a) Excellent lead vocals from Dee Dee on “Love Kills,” a song about his pals Sid and Nancy and the evils of heroin addiction, b) Joey’s vocals throughout, which are completely out of control and c) “Crummy Stuff” which is just plain fun.

Its almost terrifying how absolutely perfect this album is. Its where you’ll find “I Wanna Be Sedated,” arguably their most popular song.  But also check out “She’s The One” and “Don’t Come Close.”  My favorite? “Questioningly,” hands down.

Related: “My Audition for the Ramones”

What can I say about this record that’s not been said before? It’s awesome. It’s got a song on it called “Weasel Face.” There’s also “Bop ’til You Drop,” “Worm Man” and “I’m Not Jesus.”  And oh yeah, Debbie Harry sings back up.

It’s impossible to choose between these three albums as to which one is best. It’s like choosing between Monkey Business, Horse Feathers and Duck Soup. Seriously, every song on each of these 3 albums is a classic.

From the second Dee Dee counts in, “1-2-3-4!” I always find it’s exactly what I want to listen to. I wanna give a shout out to Tommy Ramone, “the guy who produced this piece of plastic.” It was Tommy’s vision and what he believed they could accomplish that was key in the Ramones being so great. In his acceptance speech at the Rock ‘n Roll Hall of Fame, he said, “We really were brothers, even when we weren’t acting civil to one another.”  That vibe is evident on this record, which was simply about making rock ‘n roll great again. And that’s the whole point.

Photo of the Ramones © Tom Hearn

11 comments on “The Ramones: Ranking Their Albums, Worst to First”