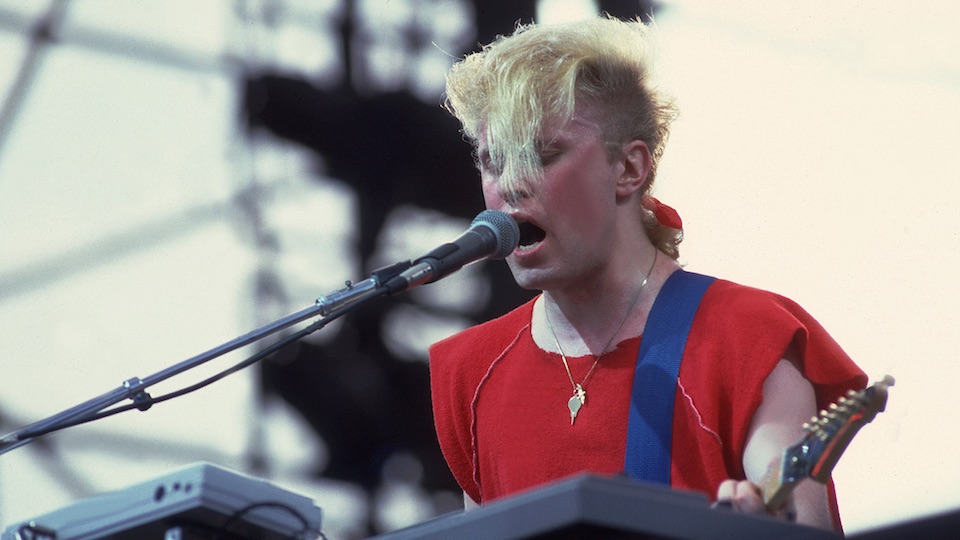 A young boy sends signals out into space using an old penny and some string. An alien intercepts them and signals back. This is the sound of A Flock of Seagulls. And, in essence, their story. In the early 1980s, the future had never seemed so near. Armageddon felt imminent with the threat of nuclear war between the US and the Soviet Union hanging in the air. NASA began launching its fleet of shuttles to explore the infinite. And in Britain, a new wave of bands armed with synthesizers were beckoning the future in their own way. They’d listened as Bowie asked, “Is there life on Mars?” A Flock of Seagulls’ answer was, “Yes. There is. And this is what it sounds like.”

Lead singer Mike Score, sporting a “waterfall” hairdo, playing his Roland Jupiter 8 synth, singing staccato lines in a robotic monotone, was truly an alien presence. His earthly counterpart, wunderkind Paul Reynolds, did, in fact, strum his Kramer XL-5 with an old penny, and though he remained less visible behind his oversized sunglasses, was the band’s beating heart. Their bouncy first hit single was the aptly titled “Telecommunication,” the verses of which sound, between jubilant choruses, like an intrepid astronaut transmitting observations from a new dimension back to a space hub. “Transfer Affection” a sweet and gentle ballad, sounds like another being mimicking human emotions and the speech patterns with which to express them. “Nightmares,” one of many songs that fall under the band’s theme of alien abduction, is haunting and sparse and features an echoing wail that sounds like it’s coming from light years away. Their signature song, “I Ran,” which Score played using a Korg MS-10 keyboard setup, makes that fabled “final frontier” sound like the wild west, a ray gun shootout between man and Martian.

The Seagulls, which also included drummer Ali Score and bass player Frank Maudsley, hailed from the famed seaport city of Liverpool. One can hear a bit of its maritime influence in the band’s patterns, that is if sea ships were spaceships and the ocean were the whole of the night sky. Reynolds’ riffs shoot up like rescue flares. They are urgent and pleading like SOS calls. On the gorgeous “Space Age Love Song,” for example, Score gamely affords them vast planes of sound against which Reynolds can orient the listener, punctuating the backdrop like a blinking radio tower. Using a Roland RE-501 jazz chorus amp and a RAT distortion pedal, he created echo effects and delays that would help define the band’s sound and set it apart from other synth bands of the era. In Score’s atmospheres, Reynolds’ offerings peak then bloom, billow and change color, like jet streams in the gloaming.

The band’s crowning achievement, the triumphant sum of all of its parts, is “Wishing (If I Had a Photograph of You).” Propelled by Score’s beautiful chords, it sounds, at once, like a shuttle lifting off and the wonder felt by those who stop to watch it pass overhead. Score finally achieves human fluency singing, “If I had a photograph of you/or something to remind me/ I wouldn’t spend my life just wishing.” Reynolds, taking an E-bow to his guitar, coaxes the craft farther and farther beyond the horizon, and the wonder of approaching a new world gives way to wistfulness at leaving the old one behind. Lush, cinematic, dreamy. Earnestness and longing echoing from a great distance. It’s a sound that would help to define the decade.

Not that they’re given much credit for it. As it is for so many acts from the 80s, pop culture is happy to profit from the Seagulls’ innovation, while dismissing them without thanks. Recently, in the film LaLaLand, frustrated musician Sebastian played by Ryan Gosling, in order to make ends meet, lowers himself to play keytar in an 80s cover band. Smarting over a previous rebuff from Sebastian, Emma Stone’s character, Mia, requests a song with the explicit purpose of embarrassing him while she dances mockingly. Her choice? I Ran. The scene hinges upon the foregone conclusion that the Seagulls are, at best, a guilty pleasure. Even among their peers, they don’t seem to get the respect they deserve. According to the book Mad World: An Oral History of New Wave Artists and Songs That Defined the 1980s, it seemed the only thing that even warring New Wave bands could agree on was how much they hated A Flock of Seagulls. The authors Lori Majewski and Jonathan Bernstein compare the band to Vanilla Ice.

Their crime? That hair. Maudsley, along with Score, who owned the hair salon above which the Seagulls held their early rehearsals, supported the band with his hairdressing, and one night before a gig, accidentally flattened what was supposed to be Score’s homage to Ziggy Stardust. The resulting coif would become not only an avatar for the band but a symbol of snide and derisive reference to the 80s in general. As Richard Blade, a DJ at KROCK during the band’s run, said recently, “Most people forget they won a Grammy in 1982 (for their instrumental “D.N.A.”), and scored a series of big hits. “That… ‘do stole the show.”

The Seagulls may get their ultimate recognition from that most sincere form of flattery. “When I hear synth bands these days, I hear us,” Score told the L.A. Times in 2015, and could be referring to anyone from M83 to Ladytron to The Chromatics. “It’s almost like it skipped a generation.” Still, many who were there in the early days, who have most likely gained perspective from witnessing music evolve over the decades, are more overt in their support. “I didn’t take this band as seriously as I should have,” is typical of the comments you’ll find under videos of the band’s hits, which receive millions of views on Youtube. Reynolds, in particular, is lauded, not only for his emotive and intuitive playing but for his helping to set the standard in pop music for the use of the delay pedal and echo effects.

Related: “A Flock of Seagulls Have Their Own Orchestral Maneuvers Now”

With songs that were largely concerned with traversing space, the Seagulls have traversed that greater frontier– time. Last June, the original four members reunited to make a record for the first time since 1984. On “Ascension,” they are joined by the Prague Philharmonic Orchestra who reinterpret their greatest hits, proving the band’s melodies to be perennial. In a promotional interview for the record, Score explains, “…People are into us now because they finally caught up to where we were when we did all these songs.” Maudsley concurs. “Back to the future.”

Photo Credit:  A Flock of Seagulls performs onstage at the US Festival, Devore, California, May 28, 1983. Pictured is Mike Score on keyboards. (Photo by Paul Natkin/Getty Images)

3 comments on “Appreciating A Flock of Seagulls: Way Beyond That Hair”