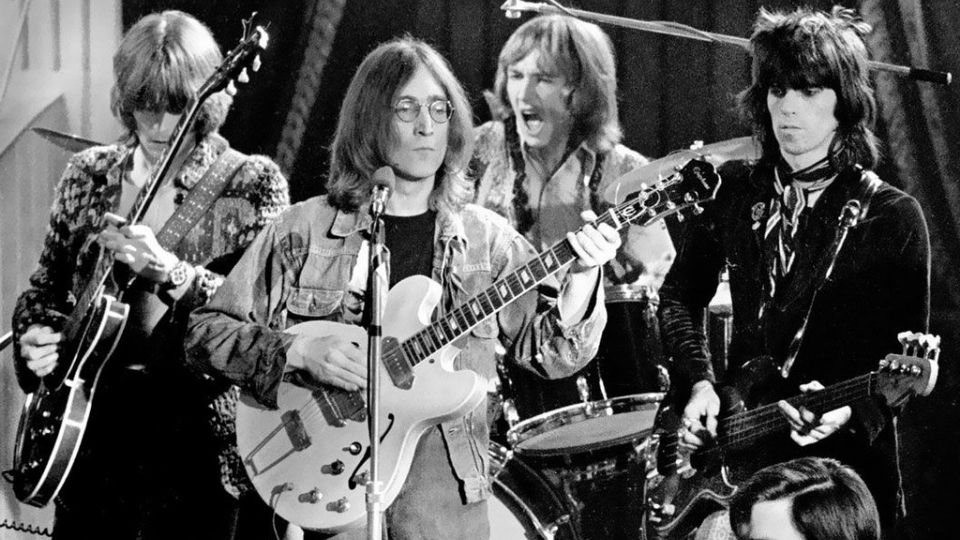 On December 11th, 1968, The Rolling Stones wanted to put on a very unique performance: a circus extravaganza played for a small audience and recorded to be aired on BBC. Played under a big top, the “circus” included strongmen, trapeze artists, a boxing kangaroo, and even a live Bengal Tiger. Joining the Stones were some of the greatest musicians of all time, including The Who, Jethro Tull, Taj Mahal, John Lennon, and Eric Clapton.

While post-production problems and lost film meant the final recording was only eventually released in 1996, the once-in-a-lifetime festival still held many important moments in musical history.

While this “counterpart to Hey Jude” only reached 42 in the Billboard charts, over time it has become one of the most beloved songs The Rolling Stones ever produced. Recorded with the London Bach Choir only a month before the concert, this first-ever public presentation of the song was stripped back, raw, and sounds quite different with only Jagger’s voice carrying it.

Despite its lackluster performance on release, “You Can’t Always Get What You Want” continued to grow in popularity. When, in 2004, Rolling Stone magazine released the “500 Greatest Songs of All Time,” it came in at 100. This placed it above many other greats, including “Rock & Roll Music,” “Born to be Wild,” and “Kashmir.”

The First Lennon Performance Since The Beatles’ 1966 Tour

It is easy to forget sometimes that the last tour by The Beatles was less than halfway through their lifespan. In December 1968, the band had just released The White Album while John and Yoko also released Two Virgins.

For The Rolling Stones’ event, John and Yoko were invited to join Eric Clapton, Mitch Mitchell, and Keith Richards to perform as the supergroup “The Dirty Mac.” The only time the group played together, they performed “Yer Blues” and improvised a piece called “Whole Lotta Yoko.” A typically eccentric piece for the couple, it involved jazz and blues music over free-form vocalizations provided by Ono.

In a very “Lennon-esque” move, the still-current-Beatle introduced all band members by name, but identified himself instead as “Winston Leg-Thigh”.

The Only Footage of Tony Iommi as Part of Jethro Tull

For most people, Tony Iommi is most recognizable as the lead guitarist and co-founder of Black Sabbath, “the heavy metal king of the 1970s.” Before taking a role in one of the most influential bands of all time, Iommi was a part of many other bands, including an early rock and roll group called “The Rockin’ Chevrolets” and the short-lived “Mythology.”

During the formation of Black Sabbath, at a time they were known as the “Polka Tulk Blues Band,” Iommi took time off to play in two performances with Jethro Tull. It is his short time with Ian Anderson that Iommi attributes the work ethic he then took to his own band.

The Rock and Roll Circus is the only footage we have of the heavy metal guitarist playing with Anderson, who music journalist David Dalton described as “a twitching werewolf, wildly scratching his hair, his armpits, and in his long, shabby grey coat, part clown, part tramp, he looks like a flea-ridden Roland Kirk.”

The Last Public Performance of Brian Jones with The Rolling Stones

Perhaps the saddest moment in the show, though only known in retrospect, was the final performance of The Rolling Stones with Brian Jones present. According to Michale Lindsay-Hogg, the director for the “circus” and later director for The Beatles’ famous rooftop performance, “[Jones] couldn’t really contribute at all on the guitar, except for a few chords.” David Dalton is far blunter. “He almost looked as if he had become the kind of scapegoat for all the sins of swinging London. He just looked like the gods had shunned him and turned their backs on him, you know?”

Six months later, Brian Jones was found motionless in the bottom of his swimming pool. He passed away at the age of 27.

For many Rock ‘n’ Roll historians, the “circus” was a turning point in sixties rock acts. Drugs were in their systems, but not yet destroying them. In the film that was eventually released in 1996, Marianne Faithful stated the truth many were not ready to admit: “There was an apocalyptic air about the whole thing.”

One year later, The Rolling Stones played the fateful concert at Altamont.

8 comments on “The Rock and Roll Circus: The Firsts, Lasts, & Onlys”