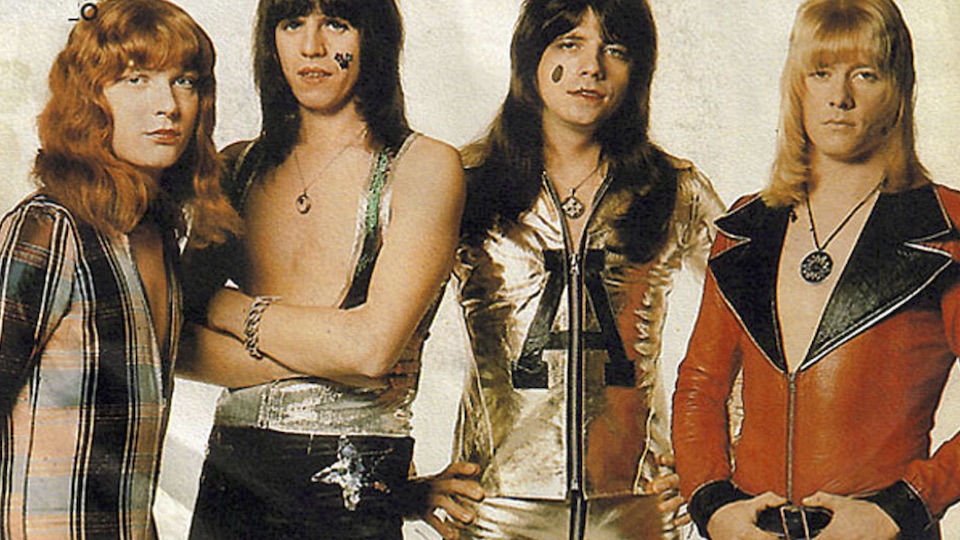 Sweet (aka The Sweet) was a chameleonic UK-based group that deftly switched genres from bubblegum pop to glam to harder-edged rock and roll throughout their existence. The band was originally known as Sweetshop, and featured Brian Connolly on vocals, Mick Tucker on drums and vocals, Steve Priest on bass, and Frank Torpey on guitar. Formed in 1968, the group released several unsuccessful singles on both Fontana Records and Parlophone Records during their early days, eventually shortening their name to Sweet. Torpey departed the band and was briefly replaced by Mick Stewart, and later Andy Scott, cementing the band’s most famous lineup. In 1971, the group signed with RCA Records and hooked up with producer Phil Wainman, as well as Nicky Chinn and Mike Chapman, a successful songwriting duo who also worked with artists like Suzi Quatro and Smokie. The Sweet’s first hit, the Chinn-Chapman penned “Funny Funny” climbed to number thirteen on the UK charts, leading to a string of hits in the UK, the US, and around the world. Here are a few of the Sweet’s tastiest tunes.

The band’s partnership with Chinn-Chapman and producer Wainman yielded several successful singles in the UK, including “Co Co” and “Poppa Joe,” but their first significant hit in the US was this delicious piece of bubblegum pop, augmented with a blast of guitar-based rock, which reached number three on the Billboard charts in 1973. While Chinn-Chapman composed most of the band’s early hits, the harder-rocking B sides to their singles were often written by the band themselves, like “Man From Mecca,” the flip side of this “can’t get it out of your head” earworm.

On their early hits, the group usually performed the vocals, while session musicians played the instruments. That all changed with this catchy (though politically incorrect by modern standards) tune on which the band members both sang and played. At this point, the Sweet incorporated more of the glam rock aesthetic into their sound and style, much like their contemporaries David Bowie, T. Rex, Slade, and Mott The Hoople. Their live appearances were becoming more theatrical, such as this performance of “Wig Wam Bam” from the BBC’s “Top of The Pops.”

For several years during the 1970s, Chinn-Chapman’s output continued to provide hit singles for Sweet, such as “Blockbuster,” which topped the charts in the UK. “The Ballroom Blitz,” one of the band’s most memorable songs, grew out of a real-life incident, which occurred at a concert in Scotland. The band had to leave the stage after being continually pelted by bottles thrown by a rowdy audience. “The Ballroom Blitz” powered its way to number two on the UK charts and number five in the US. Chinn-Chapman morphed the story of the band’s rough night into a high energy, hard-driving rocker, featuring Connolly’s brief spoken-word intro, where he asks the band if they’re all set to go. Are you ready, Steve?

Fox On The Run

While Sweet’s partnership with the Chinn-Chapman team yielded a sizable number of hits, the group was looking to expand their horizons and record more of their own compositions. Sweet Fanny Adams, their first album that didn’t feature any compositions from Chinn-Chapman, was released in the UK in 1974. The disc moved the group towards a less pop-oriented, harder-rocking sound. The 1975 single “Fox On The Run,” written by the band, is a high-energy glam metal tune about a groupie. Originally recorded by the band with Chinn-Chapman behind the boards, the Sweet reworked the tune and produced their own version of the song, which was featured on the US edition of their album Desolation Boulevard. The song sprinted up the charts, reaching the Top Ten in the US and the UK.

A melodic combination of high harmonies, power pop, and glam with a dash of metal and a bit of disco, “Love Is Like Oxygen” was one of the last major chart hits for the band. Written by Andy Scott and Trevor Griffin, and produced by the group, the track was featured on their 1978 release Level Headed. The song was a Top Ten hit in both the US and UK. This was the final album by the band to feature the classic lineup of Brian Connolly, Mick Tucker, Steve Priest, and Andy Scott. Connolly left the group after this record, and the Sweet continued on as a trio until the band broke up in 1981. At one point in the 1980s, Andy Scott, Steve Priest, and Brian Connolly were all touring with their own versions of the band.

During much of their original existence, rock critics derided the group, but they maintained a loyal fan base around the world. Axl Rose, Def Leppard, and Motley Crue have all acknowledged Sweet as an influence, and Red Hot Chili Peppers, Poison, Ace Frehley, The Donnas, and Joan Jett have all covered their songs. The music of Sweet has also been featured in a number of movies and TV shows, including Wayne’s World, in which Tia Carrere memorably performed “The Ballroom Blitz,” Suicide Squad, and the BBC series Life on Mars. Brian Connolly, Steve Priest, and Mick Tucker have all passed away, leaving Andy Scott the sole surviving member of the band. Scott still performs with his version of the group, paying tribute to the lasting legacy of The Sweet.

1 comment on “The Sweet: Spicing Up the Glam Scene”