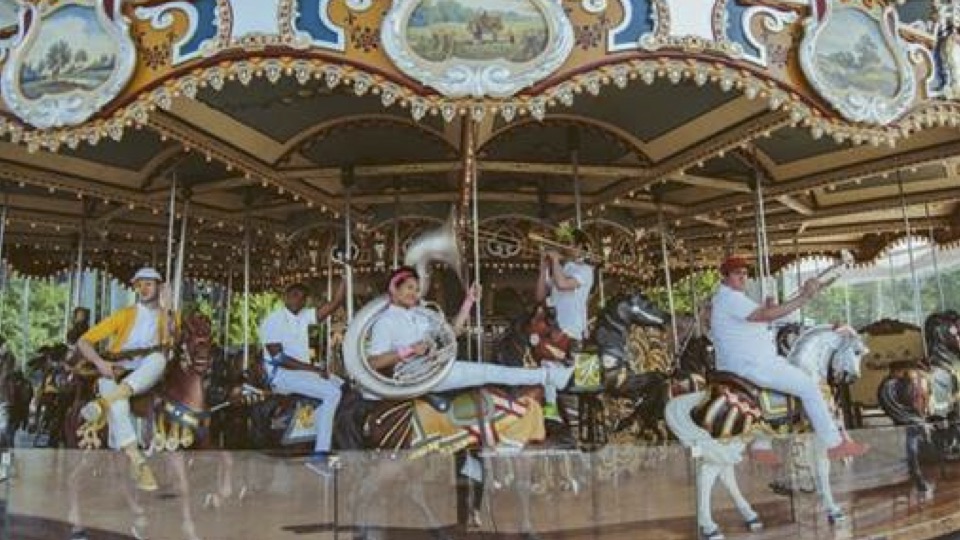 Just as AARP members sigh, “These darn kids today don’t play music—they program it,” along comes an all brass, all arse-kicking, youthful band like “Lucky Chops.”

Like countless 1960’s bands long before them whose careers were kick-started by playing catchy covers of hit tunes (i.e, the Beatles and Rolling Stones both covered Arthur Alexander, Smoky Robinson, Chuck Berry, and Buddy Holly songs), the “Chops” success can be traced back to a five minute clip on YouTube showing them cooking up a funk-jazz-mash-up of Lipp’s, Inc.’s “Funky Town” and James Brown’s “I Feel Good” in a New York City subway station. The “Chops’” members exuberantly play the trombone, a trumpet, a sax, drums, and a tuba and throw in some carefree dancing. It caught the ears and eyes of 15 million (and counting) YouTube viewers, no doubt shocked by the sight of five millennials holding something metallic before their faces that wasn’t a cellphone — and actually playing “old school” instruments.

And unlike other short-lived horn groups of the ‘6o’s like Ides of March (“Vehicle”) and Chase (“Get it On”) whose brass music blared 100% ROCK ‘N’ ROLL, “Lucky Chops” has the smarts (no doubt from attending the prestigious La Guardia High School Of Music and Art) to incorporate diverse musical genres. As trombonist Josh Holcomb noted of the band: “We’re fans of like all different types of music. And it’s one of the things that we like to really focus on, combining all of our different personal musical tastes and interests. But even us three here, we all have very different musical styles that we are influenced by. EDM, singer/songwriter, world music, like tons of different styles, jazz, rock, all sorts of cool stuff.”

The end result of their days of school band practice and busking on city streets, parks and subway platforms is their first full-length album of eleven original instrumentals (Lucky Chops produced by Grammy Award winner Nic Hard from Snarky Puppy) which was released on September 27th, and a three-month tour ending in December, encompassing 37 concerts in Europe and Eastern Europe. Hopefully, concert and YouTube viewers will see the unbridled elation the “Chops” show when they are playing live and influence their fans to pick up and learn to play a horn themselves.

To spread the brass-playing gospel, the band tries to book time at schools to give music clinics to students sorely lacking in musical education. Mr. Holcombe stated that the Lucky Chops are “starting a new YouTube series called ‘Brass Worlds’ where it’s kind of like a little documentary slash interview, a series where we’ll be meeting with fans from different countries who have local brass traditions. And we learn about those traditions and kind of learn about their culture a little bit and then share it on our YouTube channel.”

Yes, this is one very unique and talented band for the 21st Century and beyond; who in time, will have stories to tell their inquisitive children when asked questions like, “Daddy, what was it like to play at the ‘Boogaloo Zagreb’ in Zagreb, Croatia? Are Zagrebians as cool as your album cover is for your first album?”

However–there is no truth to the rumor that Mr. Holcombe stole this series idea from Davy Jones of “The Monkees,” who, before his death, was said about to launch “Tambourine Worlds” for tambourinists to meet and discuss the nuances of playing their instrument. That’s a whole other story.

0 comments on “The Tasty Chops of the “Lucky Chops””