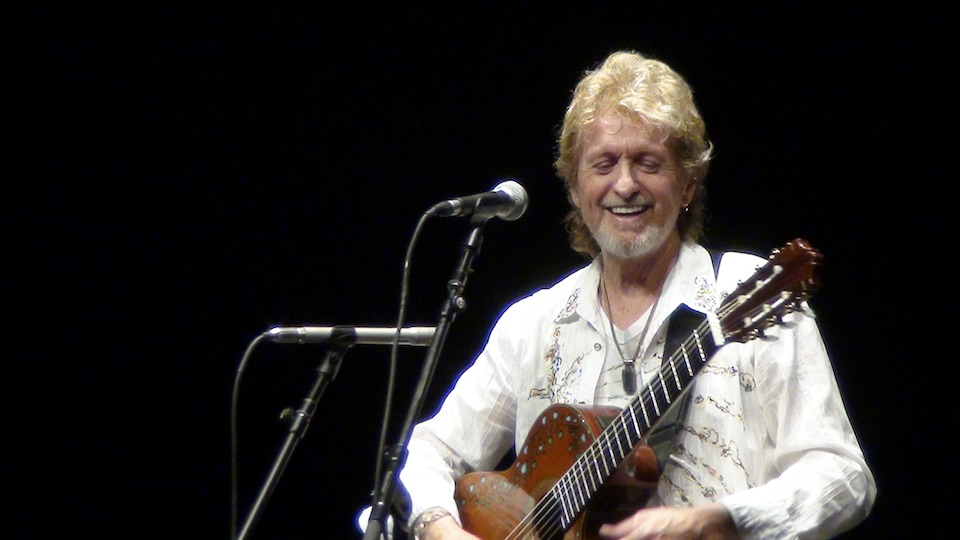 Believe it or not, Jon Anderson — the sprite-like, helium-voiced singer who helped define “prog rock” as the frontman for Yes — turns 75 today. Astonishingly, his vocal tones are still as stratospheric now as they were when he appeared on the first Yes album half a century ago. But there’s been a lot of water under Anderson’s bridge since then. He’s been in and out of Yes, collaborated with all manner of artists from Mike Oldfield to Jean-Luc Ponty, released 15 solo albums, and ventured into folk, fusion, electro-pop, and plenty of other styles, as fits his fancy. To celebrate his 75th, let’s look back at 7.5 of Anderson’s finest moments from across his career, venturing out a bit from his best-known tracks to shine a light a little further afield.

On the band’s second pre-fame LP, Yes was still working its way toward technically dazzling prog-rock glory. Along the way, Anderson and David Foster, bassist for his pre-Yes band The Warriors, penned this poignant, anthemic tune, which feels more closely aligned with The Beatles’ “Hey Jude” or “Let It Be” than with anything in the prog canon.

That same year, Anderson aided kindred spirits King Crimson on their third album, Lizard. “Prince Rupert Awakes,” the first section of the album’s side-long title suite, turned out to be too high for Crimson’s singer, Gordon Haskell. If you’re a British prog band in 1970 with a song too high for your singer, to quote Ghostbusters, who you gonna call?

In what one can assume is the only parallel between Yes and Kiss, in 1975 all the Yes members began working on solo albums simultaneously. Anderson’s turned to be a solo project in the truest sense of the word. Showing himself to be more than just a singer, he played every instrument on the album, Olias of Sunhillow. The results inevitably bore at least a slight relationship to Yes, but still had a sound all their own.

In 1980, Yes was working on what would become Drama when Anderson introduced some drama of his own by leaving the band. He lost little time in setting to work on a solo album. He managed to get Song of Seven out by November of that same year, just three months after his bandmates released Drama with his replacement, Trevor Horn. In the main, Anderson’s second solo flight was more pop-savvy and radio-friendly than anything in the Yes catalog, but the title track showed he could still turn out a stunning prog epic whenever he wanted to, with or without his old bandmates.

Related: “Why Does Almost No One Record Squeeze’s Songs?”

What Jon Anderson song did Donna Summer record with a batch of high-powered backup singers including Michael Jackson, Stevie Wonder, Lionel Richie, and Dionne Warwick? This one, which became a hit for Summer and was later sung by Chrissie Hynde with British duo Moodswings. The song first saw life on The Friends of Mr. Cairo, the second duo LP by Anderson and his pal Vangelis, the Greek keyboard wizard Anderson had once tried to bring into Yes. The danceable electro-pop was miles from anything either of them was associated with, but it worked.

By the 2010s, the artists that Yes had influenced were at the forefront of the contemporary prog scene, Sweden’s Flower Kings being a perfect example. So it made perfect sense for a post-Yes Anderson to team up with Flower Kings guitarist Roine Stolt for Invention of Knowledge for an album that combined the sort of sounds Anderson helped pioneer and the more updated approach of Stolt’s crew.

You can take the boy out of Yes, but you can’t take Yes out of the boy. In 2016 Anderson and fellow Yes alumni Rick Wakeman and Trevor Rabin began touring as Anderson Rabin Wakeman, performing strictly Yes material. By the time their Live at the Apollo album was released in 2018, they were billed as Yes featuring Anderson, Rabin, and Wakeman. Whatever they called themselves, there’s no getting around the mastery they displayed on Yes masterpieces like this one, especially with Anderson singing like a man half his age.

In a move that foreshadowed their mid-’70s solo outings, the members of Yes elected to each take one track for themselves on their breakthrough Fragile album. Nestled among band classics like “Roundabout” and “Long Distance Runaround”, the singer’s solo piece, lasting little more than a minute and a half, is a dazzling a cappella cut, where countless Andersons harmonize and provide counterpoint to each other, briefly but brightly illuminating an alternative Anderson-filled universe.