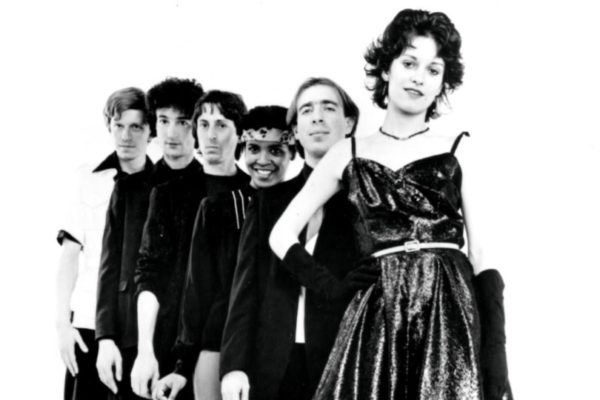 It’s remarkable — given the passing of 35 years (and the knowledge of what happened and what didn’t) — to reflect on how “sure things” and “near-sure things” somehow never quite hit the mark. Consider if you will The Waitresses, whose 1982 debut LP, Wasn’t Tomorrow Wonderful?, not only contained a radio hit with the now-seminal “I Know What Boys Like” but was also the beneficiary of perhaps the most unanimous positive critical response of the year. Rummaging through the yellowing clippings turns up a wealth of contemporaneous reviews, long since forgotten, that display that the band was in no way the novelty act that hearing their single on the radio might suggest today.

Trouser Press, then the alternative scene’s bible, declared itself charmed by the band’s “unpredictable quirkiness” and affirmatively recommended to “order from the Waitresses.” Not to be outdone, New Musical Express correctly observed that head Waitress Chris Butler “writes sharper, funnier, sadder better lyrics than almost anybody around.” Note for context that this was the year that Elvis Costello released Imperial Bedroom. Most effusive was Brit pop mag Sounds, who called the album “A landmark in American music which clearly demonstrates that the scene [in America] has transformed into something that is once again exciting and valid.”

[amazon template=right aligned image&asin=B000001FZE]Reading such things inspired me to listen to the album for the first time since probably the first Bush administration. And you know what? It’s a rocking little record. Chris Butler’s writing and playing, as correctly noted above, is endlessly clever and tuneful, while singer Patty Donahue’s sly, sleek, and utterly singular delivery was instantly recognizable, funnier than hell and, in a just world, may have been enough on its own to catapult the band to superstardom. The rhythm section, most especially bass player Tracy Wormworth, who joined up halfway through Tomorrow’s recording, serves every song incredibly well. Does the over-reliance on the cheesy organ hurt? Yeah, a little bit, but I’ve heard far, far worse things when revisiting ‘80s albums. The coy camp of the almost-hit “I Know What Boys Like” co-exists with the ersatz punk of “Pussy Strut,” which in turn is on the same album with the break-up classic “No Guilt.” It is, at nearly every turn, a brilliantly conceived and almost perfectly executed album.

So why, then, wasn’t it a giant hit? And, more to the point, why didn’t it serve to launch the Waitresses into at least the pop music troposphere, if not higher? By way of comparison, consider that when, a year after Tomorrow’s release, R.E.M. received similar plaudits for their debut long-player the result was not only a bigger hit than any “new wave” band could’ve hoped for in those dark days of AOR and “corporate rock,” but also proved to be the first step on the road to platinum monsterhood. The Waitresses were fated for something different.

In an absolute sense, it wasn’t a complete commercial flop, and a very compelling argument can be made that it did far better than might be expected for a post-punk pop band whose primary specialty was quirk. The album peaked at number 41 on the Billboard album charts, while the lead single, “I Know What Boys Like” hit number 62, thus ensconcing the band — in the stark black-and-white opinions of the charts, at least — as one of the innumerable acts of the era who saw their records receive MTV-aided success, but not quite enough to move them fully out of the weirdo ghetto that they shared with other shoulda-beens from the same time period. Think along the lines of Wall of Voodoo (“Mexican Radio,” peak number 58), Modern English (“I Melt with You,” number 76) and Josie Cotton (“He Could Be the One,” number 74) and you get some idea where the Waitresses stood in their own time.

Also setting the Waitresses apart from their largely forgotten peers isn’t simply that they made a truly outstanding album, as opposed to a great single or two, but also that they flashed the leather after their initial impact had receded. In the immediate aftermath of the Tomorrow’s relative success, the band issued an EP, I Could Rule the World If I Could Only Get the Parts, featuring the instant classic, “Christmas Wrapping,” and there couldn’t have been a better or more obvious band to provide the theme song for the late, dearly lamented and probably not overrated primetime comedy Square Pegs. These follow-ups served to show that the band’s debut album was not only not a fluke, it may well have been the beginning of a new, self-consciously weird, epoch in pop music.

But, alas. The band’s 1983 follow-up album contained the utterly brilliant and completely overlooked single “Make the Weather” and precious little else. It’s not as though Butler or his bandmates had run out of ideas, exactly, but it was obvious that the band’s style simply couldn’t co-exist with the radio fare of the time. Also key to their failure was the continued rise of MTV, an outlet that prided itself on introducing new talent, but only insofar as it looked and sounded “right.” A nerdy band (even counting Donahue’s frank and totally alluring sexuality) given to clunky chords with a black female bass player was going to find it hard to compete in a marketplace that was quickly being taken over by more obviously mainstream fare with more obviously camera-ready and musically polished acts. Think of what Def Leppard and Duran Duran and David Bowie were putting out at the time and you instantly realize the Waitresses’ predicament. They were never going to look or sound like *that.*

And so, almost as soon as they appeared, they were gone. The band sacked Donahue and replaced her with Holly Beth Vincent, which was exactly as disastrous as it sounds, and disbanded soon thereafter. Any hopes of a reunion were dashed when Donahue died of lung cancer at 40 in 1996, negating any chance they may have had for doing things like playing MTV ‘80s cruises or touring with other stars and other near-stars of the era. Butler has, of course, become something of a rock and roll lifer, in the same general sense that Peter Holsapple and John Doe and Susan Cowsill are rock and roll lifers. He pops up at unexpected times with unexpected people and does unexpected things, but only a dozen or so people ever actually know about it. Of all the Waitresses’ alumni, Wormworth has probably had the most success, being a member of Sting’s touring band right before he fully entered his Yanni phase, and has been a member of The B-52s touring band since the early ‘90s.

So what we’re left with is a truly wonderful album, a handful of great singles and a ton of what-ifs — in itself, a tale as old as time. The Waitresses were and remain singular for their almost unbelievable lyrical, musical and stylistic cleverness. As soon as you realize that “I Know What Boys Like” is not a novelty song but instead something that Madonna could have pulled off, you know that this is an ‘80s band you’d do well to acquaint or re-acquaint yourself with. Like, pronto.

12 comments on “The Waitresses Had a Wonderful Start”