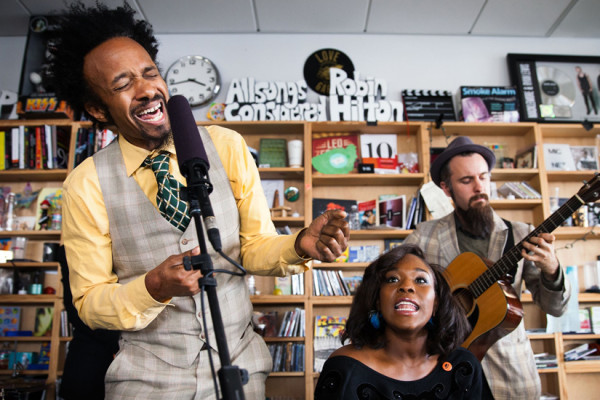 Over the past decade or so, NPR has managed to shed much of its earnest, dowdy image, thanks in large part to its adventures in music.   (This is something its cousin on the TV side, PBS, has not managed to do.) Shows like KCRW’s Morning Becomes Eclectic have long been great places to find off-the-beaten track gems. As NPR expanded beyond radio, blogs like All Songs Considered by Bob Boilen and Robin Hilton – kept the antennae up. We particularly love the All Songs offshoot, Tiny Desk Concerts.   As you’d guess from the name, TDC features musicians playing, live, in small combos – literally at Boilen’s desk. The series has attracted both established names (like Lucinda Williams, Paul Weller, Daniel Lanois and The Punch Brothers – to name really just a few) and others you might not know but should (Lake Street Dive, Kacey Musgraves, Torres, and Restorations).

Early in 2015, thousands of musicians entered the Tiny Desk Contest, hoping to get their shot on the series. The winner, Fantastic Negrito, has a story more than deep enough to match his talent. The multi-instrumental singer/songwriter quit the biz after his debut record failed. After a near-deadly car accident, he endured the resulting coma and intense rehabilitation. Then came rebirth via marriage and a son. He re-engaged, intensely, with music – and now seems on his way. The other “honorable mentions” from the contest are hugely entertaining, too.

You’ll enjoy cruising through the mix of TDC artists and music, which is admirably diverse. No matter the genre, the wee concerts are intimate and authentic. Singers sing. Players play. It’s straight-up musicianship on full display. There’s nothing small about that.

1 comment on “Big Thing, Small Package and All That”