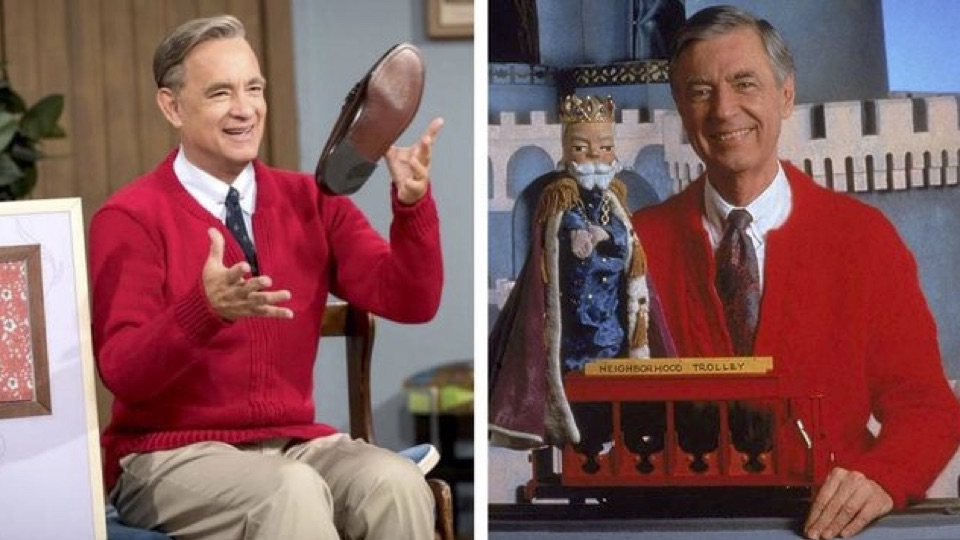 Fans of Mr. Rogers were sad to see his 31-season children’s show come to an end back in ’01. After 895 episodes of education, entertainment, and enlightenment, everyone’s favorite kind-hearted friend put on his sweater for the very last time. Gone but not forgotten, this iconic television show was part of so many children’s memories.

On air since 1968, generations of viewers were glued to their sets when Mister Rogers’ Neighborhood was on. Hearing Fred Rogers sing his happy theme song and go through his daily routine was comforting and creative in its own unassuming way. His honest approach was refreshing, his demeanor calming, and the friendliness factor made him beloved by parents from all walks of life. Fans miss his spirit and sentiment, perhaps in part since Rogers is irreplaceable. Or is he?

Of course, there’s no substitute for the mild-mannered man, but there is an actor who embodies his easygoing essence…Tom Hanks. Sure, there are considerable differences between the two, but one thing is on point. Who doesn’t like Hanks? Just like Rogers, Hanks is approachable and admirable, something we don’t see as much as we’d like from our leading men. From what we can tell, fame hasn’t gone to Hanks’ head even though he is one of the best-known celebs of our time. He’s the perfect choice to play the role of Fred Rogers in the upcoming A Beautiful Day in the Neighborhood, scheduled for release in late November.

The movie tells the story of the real-life friendship between Rogers and journalist Tom Junod, and from the looks of the trailer, Hanks is Rogers reborn. His mannerisms are remarkable, his resemblance uncanny, and every inflection in his dialogue is spot on. 2001 was a while ago now, so the fact that there is an appetite for more Mr. Rogers means there’s a shift in what we want to see on the silver screen. Perhaps we’re sick of silly rom-coms and violence-ridden action movies, or at least we could use a break. A movie like A Beautiful Day in the Neighborhood is like a breath of fresh air, bringing back the charisma and character of Rogers in a way we need now more than ever.

Related: “What’s ‘Freedom’ For Our Kids?”

If anyone can bring big bucks to the box office, it’s Hanks, so this film already has a running start. That said, it’s the nostalgia and warmth that moviegoers miss, an innocence and earnestness lacking in today’s society. Hanks can bring out such beauty, paying homage to Rogers while making the role his own.

I watched Mister Rogers Neighborhood as a child and fondly remember how I felt as I sat on the edge of my parents’ bed and soaked in that special feeling that Rogers put forth. I imagine there are countless others who had the same soothing experience. We’ll be the people heading to theaters to see how Hanks fills Rogers’ shoes. Of course, he’ll have to swap them for a pair of sneakers.

0 comments on “Tom Hanks as “Mister Rogers”: Yes, We’ll Be Your Neighbor”