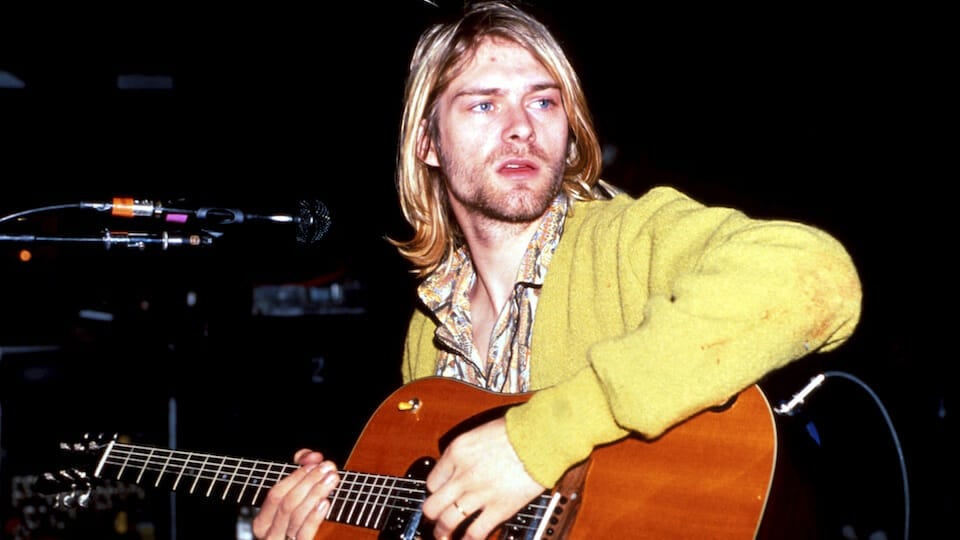 I’m probably the biggest Nirvana fan you’ll ever meet. As a working playwright, a lot of my work has been inspired by Kurt Cobain’s way of writing. Despite producing only three studio albums (Bleach, Nevermind and In Utero), this band left a mark on me. So to say that creating a Top Ten song list was tough is an understatement. Before I give you those picks, here are some “honorable mentions:” “Sliver,” “Pennyroyal Tea,” and “Molly’s Lips,” as well as their covers of “Where Did You Sleep Last Night?” and “The Man Who Sold the World.” Remember that this is just my opinion! So here we go with my picks for the top 10 Nirvana songs.

Nevermind is a legendary album. You can honestly just buy it if you want to own Nirvana’s Greatest Hits. It’s one and the same, and this is just one of many songs from that album that people still obsess over. And rightly so. “He’s the one / Who likes all our pretty songs…” Indeed.

Also from Nevermind, this song has an interesting history. Earlier variations can be found as far back as 1988 but it’s not the recording backstory that’s truly mind-blowing. The lyrics are based on a real-life story of a 14-year-old girl who survived a grisly abduction. All I’ll say further is take the time to look it up. Then listen to the song.

Let’s be clear. This tune from In Utero is an anti-rape song even though some people simply read the title and got pissed without listening to the words. Kurt made it clear that he didn’t stand for discrimination, prejudice, racism or any of that and this was by far one of Nirvana’s most misunderstood songs ever. As the man said,“You either die the hero or you live long enough to see yourself become the villain”.

For Nirvana’s Unplugged special, Kurt could have collaborated with anyone. Who did he choose? The Meat Puppets. Even today, not many people know this alt-rock band from Phoenix. Kurt was more concerned about paying respect to a band he admired rather than being commercial. I love that. And I love his cover of what might be their best-known song.

Every time you watched a memorial montage after Kurt Cobain’s suicide, this was the song used. At this point, this track off In Utero always feels like Kurt saying goodbye. I’ll always choose to listen to this, versus reading his suicide note (which I’ve only had the stomach to read once).

This Nevermind single is my go-to to shut up all the ‘80s fanatics claiming Cobain ruined rock because “‘90s band were depressed and didn’t know how to have a good time.” If you ever watch any Nirvana interviews, they were always laughing. If you listen to “Lithium,” you can see that the whole “all ‘90s rock was sad” thing is far from the truth.

I like this song because it doesn’t go away from the sound of Nirvana, but at the same time, you hear amazing growth within the band. Not to mention: the music video is one you will never forget. Remember when this level of effort was consistently put into music videos? God, I miss the ‘90s!

For a lot of people, the first track on Nevermind would be number one. Well, I’m not sure that people realize that this song (arguably the national anthem for grunge) was a very last minute addition to the album. It almost actually didn’t make the cut. I’m glad it did, and I love it, but I prefer…

The only song on this list from Bleach just missed out on being my number one pick. You can hear how much the Beatles inspired the band, but the entire LP (Nirvana’s first), has a little more Heavy Metal to it. That gives you an idea of where the band was headed. “About a Girl” is a song that I’ll listen to for the rest of my life  — and never get sick of.

Was it more popular than “Smells Like Teen Spirit”? No. But if the latter qualifies as the theme song for Generation X then this is the Pledge of Allegiance. “Come As You Are” also has one of my favorite quotes from Kurt Cobain: “Wanting to be somebody else is a waste of who you are.” When will I ever tire of hearing that?