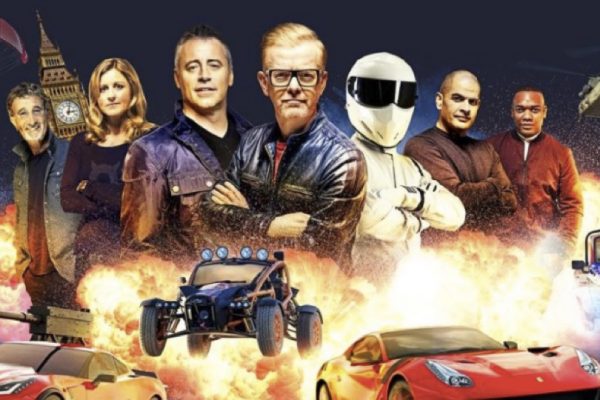 Ladies and gentlemen, start your engines. It’s the beginning of a new era for the world’s most-watched factual TV program (according to the Guinness Book of World Records). Top Gear is returning to the BBC (and BBC America here in the U.S.) at the end of the month – but it’s going to look a lot different.

There’s no doubt there will still be lots of beautiful, exotic, amazing (and amazingly expensive) cars. But the three hosts who helped make Top Gear a worldwide phenomenon will be noticeably absent. In their place will be a slate of six presenters which includes Friends star and car enthusiast Matt LeBlanc, British radio personality Chris Evans, racing driver Sabine Schmitz, YouTube star Chris Harris, F1 commentator Eddie Jordan and journalist Rory Reid. The lone holdover from the old series is The Stig, an anonymous race car driver dressed in a white racing suit and helmet who does all his “talking” on the track.

So why the overhaul for Series 23? For those who don’t know the backstory, the shakeup came in March 2015 after host Jeremy Clarkson allegedly physically and verbally attacked a producer for not providing hot food after a long day of filming (it wasn’t the first time he had gotten into trouble for various offenses). The BBC did not renew Clarkson’s contract after which his two long-time fellow hosts, Richard Hammond and James May, decided to leave the show as well. All three are currently working on a new program of their own which is set to debut on Amazon Prime in the fall. It’s name was recently revealed to be The Grand Tour, with episodes being hosted in different countries. (Of course CultureSonar will cover the new Amazon show when it is released.)

The BBC has not given away too much about the revamped Top Gear. But based on an extended promotional trailer (below), fans can expect more of what they’ve come to know and love — racing, challenges, and the aforementioned drool-worthy cars. The TG website says, “Filming has taken place in nine countries over eight months, the six new presenters racking up over 7,500 miles.”

For the past 10+ years, Clarkson, Hammond, and May had done it all – in all corners of the globe. A few personal favorite segments include the race between a Ferrari Daytona and a Powerboat, “car football,” rolling a Reliant Robin, the space shuttle car…I could go on and on. And the yearly TG specials in places like Bolivia, Africa, and Vietnam are terrific.

The show is also a celebrity magnet, with famous people from all industries appearing on the show for a segment called “Star in a Reasonably Priced Car” (where guests take a spin on the Top Gear test track). Singer Chris Martin is in the new trailer, so perhaps it’s a tradition that will continue.

For me, it was the old hosts – and their interactions – that were the driving force behind Top Gear for so many years. It will be interesting to see if the new presenters can keep the momentum going, or if TG will hit the brakes. And on that bombshell…

0 comments on “Pedal to the Metal: A Brand New “Top Gear””