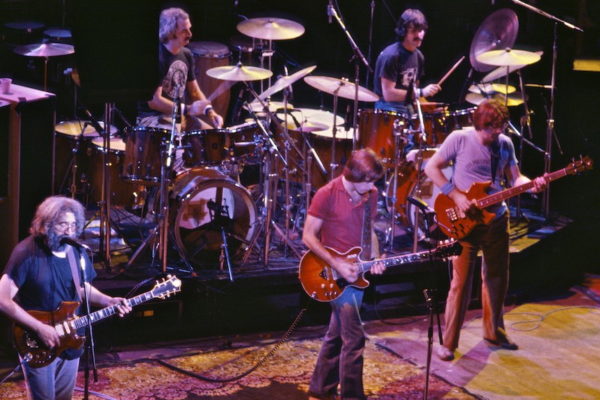 Making its MTV debut 30 years ago today on Jun. 19, 1987, the Grateful Dead’s “Touch of Grey” video marked the precise moment at which the Grateful Dead shed their “world’s largest cult band” moniker and belatedly joined the American mainstream. The song – the band’s first and only Top 10 hit – ushered in a commercial and artistic rebirth that was almost inconceivable when the year began. The song’s popularity caught many Deadheads unawares, and brought new complications for the band. But without it, it’s not at all certain that the band would’ve enjoyed the live renaissance that they did, that luminaries like Paul McCartney and Elvis Costello would’ve name-checked the band as inspirations, or that, eight years hence, the President of the United States would’ve publicly mourned bandleader Jerry Garcia’s passing.

It’s even possible that, without “Touch of Grey,” the band wouldn’t have become utterly obvious inductees into the Rock and Roll Hall of Fame (as opposed to a fringe band voters could choose to ignore). The world may also have been deprived of the glut of Dead covers that began springing up shortly after the single’s success. Hell, we probably wouldn’t even see Dead-related materials sold at consumer behemoths like Target and Kohl’s.

That’s a lot of heavy lifting for a five-minute pop song.

But the song pulls it off. Even with the accumulated baggage of three decades, “Touch” still sounds every bit as ebullient and piquant and goofy (“The shoe is on the hand/it fits”) as it did the first time you heard it crackling through the speakers. As life-affirming statements go, it’s hard to beat the simplicity and purpose of “I will survive,” and each verse’s “It’s all right” ending underscores the survival instinct in a world gone at least kind of mad. Filled with the kind of musical hooks that filter through the heat of the beach or the campsite or wherever you were when the song began its climb, it was the obvious choice for 1987’s Single of the Summer, twenty years after the so-called Summer of Love first introduced the Grateful Dead to America.

So where did it come from? How did a meditation on middle age and the fragility of life manage to attract a teenaged audience? Why was the song — after years of misses for the Dead; the one to find mass appeal? And, for a band that was already in every year-end top-5 list for concert draws, what implications were there for “oversuccess”?

Technically, the story begins in 1982, when the Dead premiered the song on Sep. 15. Over the next four years, it became a steady part of the band’s repertoire and was, among Deadheads, generally well-received. But the impetus for “Touch’s” place in the Dead canon began in December 1986, when the Dead played it to open their first show back after Garcia’s recovery from a diabetic coma he suffered the previous July. As recounted in Skeleton Key: A Dictionary for Deadheads, the audience joined in “for joyous sing-a-longs” during the chorus.

From there, things snowballed quickly. The Dead not only found their footing, they began playing with newfound focus and energy and used the occasion to record their first studio album in seven years, In the Dark. By the time of the album’s June 1987 release, a perfect storm had gathered that would dramatically change the trajectory of the band’s career.

Earlier in the year, the syndicated “Deadhead Hour,” hosted by musician, author and radio-producer David Gans debuted, becoming the first nationwide radio program to feature live Grateful Dead music on a regular basis. The special Rolling Stone Summer double issue made the band cover boys for the first time in more than a decade, heralding a “New Dawn of the Grateful Dead.” And the band planned a high-profile set of stadium gigs with Bob Dylan. Suddenly, inexplicably, there was a buzz in the air about the Grateful Dead.

It’s hard to know whether “Touch of Grey” was a beneficiary of that buzz or a product of it, but either way the time was clearly right for a Grateful Dead renaissance that included the charmingly shambolic symbols of the counterculture using — gasp! — ’80s marketing. Famously, an Arista A&R man, upon hearing the finished song for the first time, proclaimed “The Grateful Dead have written a fucking hit!” Sure enough they had, but obeisance to the great god MTV required a video to ensure hit songs became hit songs. The song’s brilliant video played an unquestionably played hefty role in exposing the Dead to a wider audience and giving a primer to some of the band’s symbolism.

As if to prove the point that every silver lining does indeed have a touch of grey, though, that wider audience gave the band, its fans and concert locales across the country significant headaches. The “Grateful Dead scene” was irrevocably altered.

“In general, it made things incredibly difficult,” longtime Dead publicist and author Dennis McNally said in a recent interview. “Before ‘Touch of Grey,’ people had become Deadheads with an organic process in which they heard a tape, they heard a song, they found quite frequently an older sibling or an older friend who turned them onto the band. And because it was an organic process, they were socialized to the process. So that as they learned about listening to the music and liking it, they also learned certain manners and protocol.”

Manners and protocol that were quickly put to the test. 1987 marked the first occasions of what would become ritual “overcrowding” (according to Rolling Stone) that never really went away until Garcia’s passing. “All over the country, people heard the song on radio and instead of getting the cultural context they just heard the song and they went, ‘Oh, I like that song. I’ll go to that show.’ And then, they’d find out that they can’t get into the show but they go anyway, and they discovered the wildest party that any 19-year-old ever needed. So we went from having 500 or 1,000 people without tickets at a show to anywhere from 5,000 to 10,000 people without tickets at a show. This is called overloading your environment.”

In the full blush of time, however, whatever problems “Touch of Grey” may have engendered seem distant and trivial. They could be said, in fact, to amplify the song’s spirit — whatever nonsense befell the Grateful Dead and whatever nonsense we face in an increasingly and disappointingly nonsensical world, we will survive.

I’ve always found it instructive to think of “Touch of Grey’s” narrator as being the same voice heard in the Dead’s 1970s masterpiece, “Help on the Way.” In that song, having become fully aware of love’s primacy, the speaker commits his all to keeping it — lock, bolt and key. “Touch of Grey” can be thought of as the same narrator, looking back after having lived through the implications of his commitments and taking bemused comfort in the results of having honored love’s principles. For illustrative purposes, see how easily

Tell me the cost
I can pay
Let me go
Tell me love is not lost
Sell everything
Without love, day to day,
Insanity is king

In other words, the resilience one gains by doing whatever it takes to live up to a promise of love can’t help but inspire and nurture a world weariness tempered by an endless, almost pathological optimism.

Before we shut down, a brief note on the seriousness with which the Grateful Dead took having a hit. The band famously never made set lists, choosing rather to follow whatever paths the music took them on. Accordingly, they rarely played the same songs more than once or twice a week. As “Touch of Grey” climbed the charts, there was naturally some level of pressure for them to perform their shiny new hit song. They demurred, playing the song only slightly more often than they otherwise would have and famously shocking Arista Records President Clive Davis by not playing it when he attended a show.

“I don’t think the band was all that concerned with having a hit,” Gans said in a recent interview. “They were already making huge amounts of money touring, so their model of success didn’t really include record sales. My sense was that they looked at it all with a certain bemusement, rather than getting all crazed with dollar signs.”

It’s been 30 years since “Touch of Grey” started the process of turning a hippie secret into an American icon. If it’s not fully a member of the Grateful Dead’s major canon (and I’m in no way suggesting it isn’t), it is at the very least near the top of the minor one. Superb production by Garcia and John Cutler have kept the studio version sounding younger than yesterday, and the numerous excellent live versions of the song in the late ’80s will always be a testament to a place in time whose energy suggested possibility and fun and hope. It’s another day, and we have survived.

Photo Credit: Cropped image of The Grateful Dead by Chris Stone via Flickr