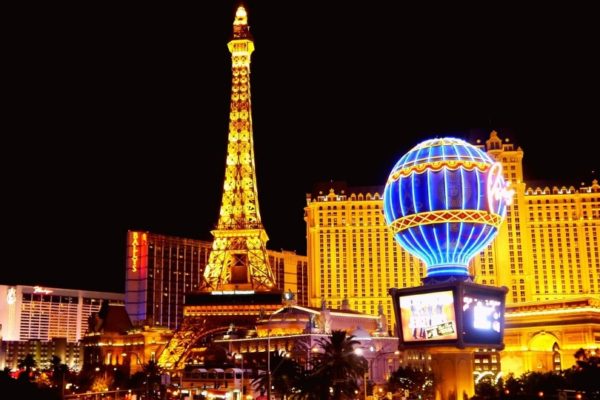 Las Vegas has always been a town known for its top-flight entertainment, from magicians to showgirls to Cirque du Soleil. But music has been taking over for Broadway imports and production shows, as a large percentage of the city’s showrooms fill with mini-residencies by big-name music acts from Cher and Rod Stewart to Journey and Def Leppard. But if you’re not out to see Celine in the Coliseum or Britney in the big room, there are other musical options, wider of genre and smaller of scale, from cowboy-themed indie clubs to tiki joints with jazz combos to big rooms with big names —it’s all here in Las Vegas.

Brooklyn Bowl
Perhaps the best venue on the Strip is Brooklyn Bowl, a jumbo-sized offshoot of the NYC original. The sound system is top-notch, the staff is pleasant and where else can you bowl, eat fried chicken by Blue Ribbon and watch Method Man & Redman all at the same time? The Bowl’s stage has been played by acts as diverse as Erykah Badu, Adam Ant and Father John Misty; it’s also hosted multi-night stands by Ween, the Roots and Phil Lesh of the Grateful Dead. If things get too crowded and/or sweaty, you can always step out to the balcony and dig the show out on the street.

[amazon template=right aligned image&asin=162809060X]Backstage Bar & Billiards
It’s not a fancy joint, but it doesn’t have to be. Located on Fremont Street, slightly east of the tourist madness Backstage Bar & Billiards — also known as Triple B’s — has hosted a wide variety of bands and events in a black-painted space livened with the occasional rock poster or gold record. Oakland hip-hoppers Dilated Peoples, garage veterans the Sonics, rockabilly legend Wanda Jackson and high-desert rockers the Eagles of Death Metal have all played here; not to mention burlesque, vaudeville and wrestling shows. The Triple B’s stage was also busy during the recent Crapshoot Comedy and Punk Rock Bowling festivals.

The Golden Tiki
A tiki bar gone full Disney, the Golden Tiki has Hawaiian masks, velvet paintings, shrunken heads, a talking skeleton and a large menu of rum-based libations. There is always a DJ spinning something interesting back by the giant clam shell, be it Yma Sumac or Rufus Thomas, while surf or jazz combos frequently add to the retro atmosphere. Touring bands that pass through range from banjo & sax vaudeville-flavored acts to full-tilt costumed Ramones tributes. The Golden Tiki also hosts some big-name guest DJs, including Clem Burke of Blondie, Daniel Ash of Bauhaus/Love & Rockets and Jello Biafra.

Count’s Vamp’d
Are your tastes more David Lee Roth than Sammy Davis Jr.? Count’s Vamp’d is Vegas’ hair metal hangout, where the decor runs to black and red and spiderweb and the sounds lean late 20th century. The club is owned by “Count” Danny Koker of Count’s Kustoms car shop and the Counting Cars reality show and the crowd definitely favors black T-shirts and blowdryers. There are plenty of tribute acts, including fully-staged KISS tributes and all-female Iron Maiden cover acts, or you might catch some authentic denizens of the Sunset Strip like Faster Pussycat or Stephen Pearcy of Ratt.

Bunkhouse
The Bunkhouse may be the city’s premiere spot for indie rock, a chill indoor-outdoor space Downtown with a taco truck in the front and an airstream peddling vintage clothes in the back. Since starting out as a video poker bar a decade or two ago, it’s been through numerous owners and incarnations, but has always maintained its cowboy theme in decor, if not in sound. Alternative heroes the Breeders and Built To Spill have hit the stage here, as have later-wave indie acts like gender (and genre) bending punks Downtown Boys and Cali stoner rock chicks Deap Vally. Members of hometown heroes the Killers have been known to slip onto the Bunkhouse stage as well…

Double Down Saloon
This legendary punk rock hangout opened in 1992 and is still going strong. Adorned with weird murals, odd sculptures and tube TVs pumping out surreal video montages, it’s actually a pretty chill bar where locals hang with foreign tourists and the jukebox contains the work of both Dean Martin and Joe Strummer. Bands play most nights of the week; monthly events of note are the Frank & Dean’s Weenie Roast (first Wednesday), with punk versions of Rat Pack tunes and burlesque dancers, and TV Party (second Thursday) with music-themed movies, live performances and free popcorn.

The Hard Rock Hotel & Casino
The Sid Vicious and Jimi Hendrix slot machines may be gone, but the music lives on throughout the Hard Rock’s many venues. The Center Bar is site of the occasional guest DJ, such as Angelo Moore of Fishbone or Scott Ian of Anthrax. A wide range of acts in their club space, Vinyl, have included classic rockers the Yardbirds, psychobilly hero the Reverend Horton Heat and, um, Corey Feldman. The jumbo-sized Joint is the stage for Snoop Dogg or Alice in Chains and, of course, the pool area hosts concerts during the warmer (and warmest) months. Occasionally events like the Warped Tour or Psycho Fest will take over multiple venues — and the poker tables. Make sure to check out the casino’s vast display of memorabilia of everyone from the Who to Nicki Minaj.

PS. Check out our other music-related travel guides to destinations like Nashville, Memphis, and Chicago.

0 comments on “A Music Lover’s Guide to Las Vegas”