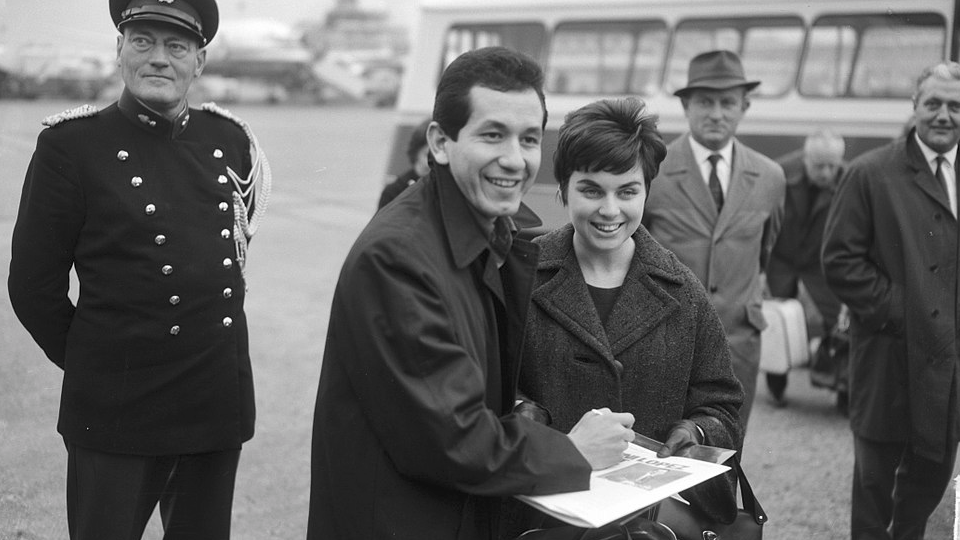 The release of Barbara Streisand’s and Trinidad (Trini) Lopez’s debut albums occurred in the same month and year (February 23, 1963, for Barbra, February 4th for Trini).  At first glance, whatever these two artists have in common starts and ends on those dates.

But on second glance…

Their rookie efforts (The Barbara Streisand Album and Trini Lopez at PJ’s) acted as bold statements in that both refused to disguise their race or religion with more user-friendly, “commercial” names as was a widespread practice at the time.

But in Trini’s case, he proudly kept his last name and more importantly, his dignity.

David Ebersole, co-director of Trini’s 2021 documentary, My Name Is Lopez, noted: “Trini said to the world, ‘This is my heritage. I’m Mexican and there’s no reason I should have to erase that.  He was willing to walk out on a record deal if they wouldn’t use his real name.  Back then, that was phenomenal.”

Phenomenal also describes the sales figures for his debut album (#2 for six weeks on the Billboard charts), one of its singles (“If I Had a Hammer” shot up to #3), and Trini’s impact on the recording industry—thanks to Frank Sinatra.

While Frank was visiting PJ’s, a Beverly Hills nightclub, he watched Trini as one of the first artists to add shades of rockabilly and Mexican music to old folk songs.  Sinatra decided to sign Trini to his record company (Reprise Records).  To totally catch the “now sound” of Trini’s trio live, producer Don Costa placed a microphone on PJ’s floor to record an exuberant audience clapping and dancing.  The result: a smash live album that made the recording industry take notice and laid the groundwork for future hit live LPs by Johnny Rivers, the Who, and Allman Brothers.  Twenty-nine years later, the Beastie Boys spoofed (or gave tribute to?) Trini via their song “Live at P.J.’s.” from their Check Your Head album.

Trini’s sound was also once admired by two fellow Texans, who were famous for their hits: Jack Ruby and Buddy Holly.

Trini wouldn’t have rubbed elbows with either if not for his prescient father buying his eleven-year-old son a guitar to keep him away from the gangs in their tough Dallas neighborhood known as “Little Mexico.”  Five years later, the 16-year-old was strumming and singing in The Carousel Club, a nightclub owned by Lee Harvey Oswald’s future killer, Jack Ruby.  Perhaps wanting to limit his time with the volatile Ruby, Trini spent a much more friendly time in 1958 with Buddy Holly.

Trini’s personal assistant, Oralee Walker remarked: “Buddy was the first one who didn’t look down on him as a Mexican.”

Buddy introduced Lopez to his producer, Norman Petty, who got him a deal with Columbia Records on the condition that Trini change his name.  Lopez refused—as he did with a second label (Volk Records) who did release one of Trini’s songs under his own name that slyly took note of his plight: “The Right to Rock.”

Sadly, after Buddy Holly’s plane crashed, Trini’s career slowly soared.  Buddy’s producer, Snuff Garrett, summoned Trini to Los Angeles to be the new leader of Holly’s band, The Crickets.  Trini journeyed to LA only to find the hard-partying Crickets were more interested in drowning their sorrows than swimming in cash.  Trini worked solo around the city and then assembled a trio; which included Mickey Thomas, Dylan’s future drummer.

Trini jokingly noted that he had gone “from the barrio to Beverly Hills”—with a detour to Hollywood where he was cast as Pedro Jimenez in The Dirty Dozen.  Arguably the greatest WWII film ever made, Trini’s part was drastically trimmed down thanks to Sinatra’s meddling.  When production on the epic ran on too long for Frank’s liking, Sinatra strongly suggested that Trini quit the flick so he can get back to recording and earn more money for Reprise Records and its owner.

Todd Hughes, co-director, of My Name Is Lopez, believed that “Frank ruined Trini’s movie career.”  Trini, who died from COVID in 2020 at the age of 83, then spent his time touring and making music but never repeated the massive success of his first album.

Not that his life was so bad!

While still in his ’30s, Trini signed onto the lucrative oldies circuit then became a money-making draw at casinos, cruise ships and swanky hotels; playing one of the two Gibson guitar models (Trini Standard and Lopez Gibson) that the company asked him to design in 1964.  Dave Grohl of the Foo Fighters is a Lopez Gibson man himself; gushing of the handsome instrument: “This is the sound of the Foo Fighters.”

And from January 16th to February 4th, 1964, Parisian audiences at the Olympia Theatre clamored for Trini’s sound and not for a band that opened for him.  Lopez recalled reviews of the concerts:

“The French newspapers would say, ‘Bravo, Trini Lopez!  Who are the Beatles?’”

1 comment on “Trini Lopez: The Most Important Man In Rock ‘n Roll?”