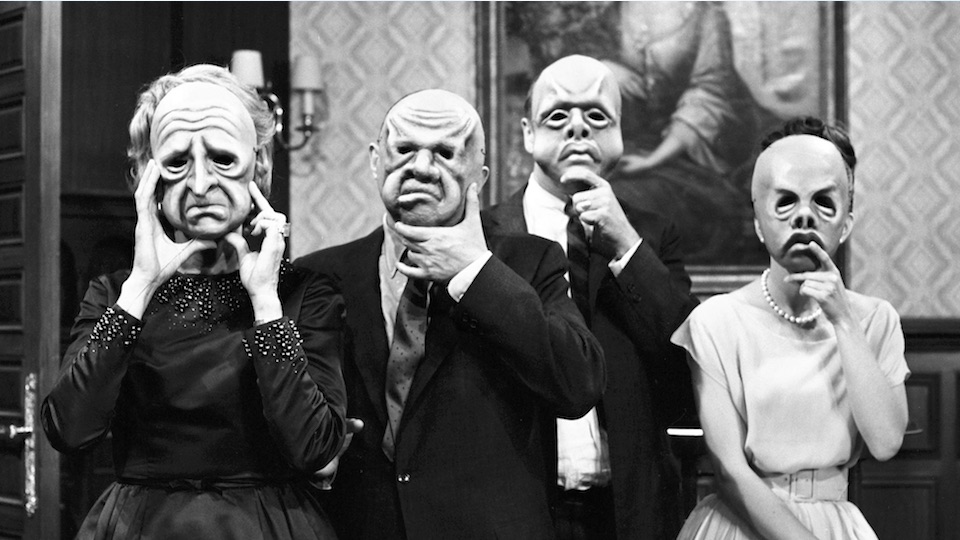 Despite owning every episode of The Twilight Zone on DVD, whenever there’s a marathon on a holiday weekend, I have to watch. As much as I enjoy the acknowledged classics like “Eye of the Beholder,” one of the great pleasures of these marathons is seeing episodes you wouldn’t necessarily tune in for because they’re not generally viewed as one of the “greats.” Certainly, not all Twilight Zone episodes are created equal, and a few are pretty bad. Still, some of these lesser-known stories are in their own way just as compelling as some of the program’s touchstones and deserve a little extra attention. Moreover, they include some of the finest acting performances ever seen in the series, which is to say in the history of film and television.

“Nick of Time”
William Shatner’s other Twilight Zone appearance, “Nightmare at 20,000 Feet,” is far more famous, but his earlier appearance is the one that shows why he was once regarded as one of Hollywood’s best young actors. There’s no supernatural element here, just a well-played character drama about taking charge of one’s own fate with a final twist that shows how truly infinite the format of the program was.

“The Night of the Meek”
Reportedly, this story was the result of Rod Serling’s desire to do a Christmas story with Art Carney as Santa Claus. The end result found Carney playing Henry Corwin, a down-on-his-luck soul whose job as a department store Santa is the outward expression of his wish that both he and Christmas could be something finer. Corwin gets that wish – courtesy of The Twilight Zone.

“The Changing of the Guard”
Many protagonists entered the Twilight Zone and found themselves displaced from their own time. In this story, a man who feels that time has passed him by has the Twilight Zone come to him. Beautifully played by Donald Pleasence, Professor Ellis Fowler laments that his years of teaching failed to move or motivate any of his students. As he contemplates suicide, Fowler is visited by the ghosts of his former students and learns that he left a much deeper mark than he’d ever allowed himself to imagine. While Rod Serling’s script isn’t terribly original, it gives Pleasence enough to work with so that the actor’s absolute conviction can make the episode something special.

“The Masks”
The only Twilight Zone episode directed by a woman (Ida Lupino who also starred in “The Sixteen-Millimeter Shrine”), “The Masks” is another concise character piece in a similar vein as “Nick of Time.” Lupino, who directed a number of feature films, has an unsurprising affinity for getting the best out of actors. As with “Nick of Time,” it’s possible that the lack of supernatural overtones may be the main reason this episode isn’t as well-regarded as some other less substantial (and more cliched) episodes of the program.

“Printer’s Devil”
Described in The Twilight Zone Companion as “a fairly run of the mill deal-with-the-devil story,” Charles Beaumont’s adaptation of his own short story “The Devil You Say?” is admittedly not the most original of episodes, even in comparison to others from the show’s later seasons. It’s elevated above the ordinary, though, by Burgess Meredith’s performance as the…well…title character. Among the highlights is the scene where Meredith’s “Mr. Smith” first makes his deal with the struggling newspaper owner, comparing their soul to a vintage wine. “Printer’s Devil” was Meredith’s fourth and final appearance on The Twilight Zone, which brings to mind the actor’s first appearance on the show and an honorable mention for the most overrated episode of The Twilight Zone.

“Time Enough at Last”
The twist ending with Meredith’s unassuming book-worm Henry Bemis breaking his glasses is potentially the most iconic moment in the program’s history. That undeniably good twist has helped camouflage for decades that the other 20-odd minutes of “Time Enough at Last” aren’t themselves really all that good. It’s obviously a fine showcase for Meredith and he gives it his all. Beyond that, though, there really isn’t much more to it. The characters who are disparaging of Bemis and his love of books seem to do so simply because it’s what the script requires, and Bemis himself doesn’t have much more dimension either. In fact, what stands out most about this episode is how obvious it all feels. It’s a twist worthy of The Twilight Zone that its best-remembered story is in many respects one of its least interesting.

4 comments on ““The Twilight Zone” Can Still Surprise You”