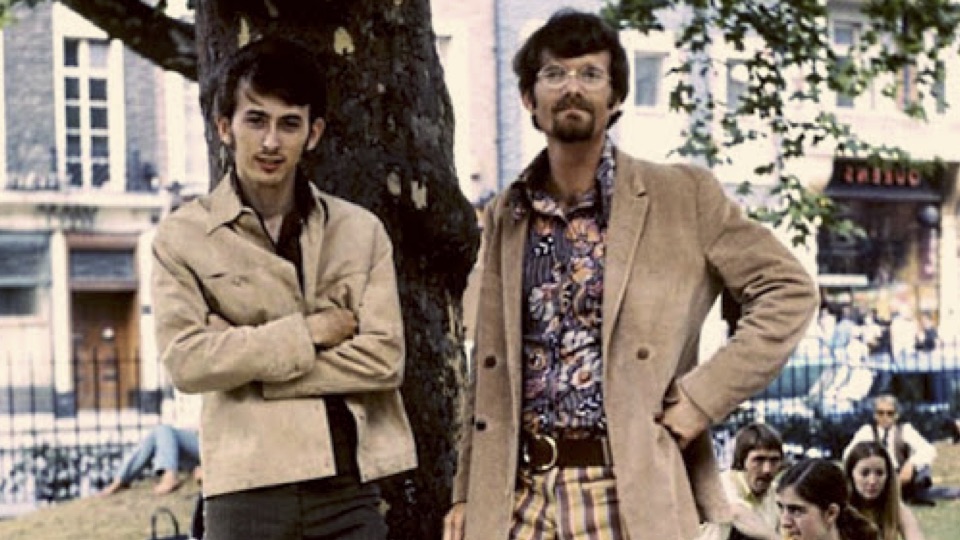 There was a time when a musical team with the word “and” in its name could be found having a top twenty and/or a #1 song. These “and bands” included Sonny and Cher, Ike and Tina Turner, Sam and Dave, Captain and Tennille, Jan and Dean, and finally, Simon and Garfunkel. Most of these duos were musical mainstays on the charts.

And then there were those two-person named bands who had short stays in the record-buying public’s imagination.

That is, let’s just say in the year 2525, if men are still alive, Zager and Evans will still be eligible for the Rock ‘n’ Roll Hall of Fame.

The Nebraska natives scored a number one 1968 hit (for six weeks!) via a ditty called “In the Year 2525 (Exordium & Terminus).” The song is a kitschy warning of a bleak future where humans won’t need their teeth or eyes and it even “predicted” test-tube babies:

“You’ll pick your son/ Pick your daughter too,
From the bottom of a long glass tube.”

The single’s success surprised its creators when it rapidly soared up the charts and landed the lads on the cover of Time magazine. Denny Zager recently stated: “Who would have believed two farm boys from Nebraska would have the No. 1 hit in the world and have Time magazine saying the Beatles would be jealous! I couldn’t have dreamed it.” Zager, who today builds custom guitars with his son in Lincoln, Nebraska for clients that include Lady Gaga, recalled that “Rick (Evans) wrote the lyrics in ten minutes in the back of a Volkswagen van after a night of partying and a lot of Mary Jane.” Evans died in 2018, while the song’s producer, Tommy Allsup, came close to meeting his death on the plane that killed Buddy Holly. Tommy was a guitarist in Holly’s touring band at the time and lost a coin toss by calling heads with Richie Valens for a seat on that fateful Beechcraft Bonanza plane that crashed.

Allsup, who named a Fort Worth club he owned the “Heads Up Saloon,” went on to have a long life; which is more than can be said about another musical duo’s life on the charts.

Consider the one-hit case of Delaney and Bonnie (Bramlett) and their #13 hit in 1971; “Never Ending Song of Love.”

The song was funkily re-recorded by Ray Charles in 1998 (and not-so-funkily by the Osmond Brothers in 1982). The Bramletts, who stopped singing love songs to each other after their contentious divorce, were once critical darlings, but it could be argued that the duo is more remembered for who played in their band rather than what they played. Like the heavy metal band London, whose members left for greener (cash) pastures in bands including Mötley Crüe, Guns N’ Roses, W.A.S.P. and Cinderella, “D&B” acted like a musical minor league team, where players honed their chops before being picked up by a major league rock team. The endless list of their all-stars includes trumpeter Jim Price (who later played with the Stones) and renowned session drummer Jim Keltner, whose careers were kick-started when Joe Cocker poached them and practically the entire D&B band (including Leon Russell who played on the duo’s 1969 Accept No Substitute album), to go on his 1970 Mad Dogs and Englishmen Tour.

Eric Clapton was perhaps the biggest fanboy of the Bramletts; citing that “Delaney taught me everything I know about singing.” After cutting an album with them (On Tour with Eric Clapton), Clapton formed a group called Derek and the Dominoes that featured four ex-D&B’ers: Bobby Whitlock (keyboards), Carl Radle (bass), Jim Gordon (drums) and guitarist Duane Allman, who played on four of the Bramlett’s seven albums.

But alas, critics and fellow musicians can’t convince a record company to keep a skilled but underselling band under contract. Indeed, there have been countless “and bands” that make a big splash only to see their record sales slow to a trickle.

Such was the case of Friend and Lover, which consisted of the husband and wife team, Jim and Cathy Post. Their tune, “Reach Out of the Darkness,” which featured Ray Stevens’ keyboards and strings arrangement, zoomed to the #1 spot in 1968.

Unfortunately, Friend and Lover’s album and career rapidly declined—as did the Post’s marriage which further proves that songs espousing love sung to a spouse is sometimes not a good formula for a good marriage* (*see the Bramletts, George Jones and Tammy Wynette, Richard and Linda Thompson, Sonny and Cher, all of ABBA, etc.).

But maybe it’s not the music the “and bands” made that resulted in dismal record sales. Perhaps it’s the fact that the word “and” is in their group’s name that doomed them to fail.

After all, Buckingham Nicks happily left their band’s name in the dust to join what turned out to be a much more lucrative one: Fleetwood Mac.