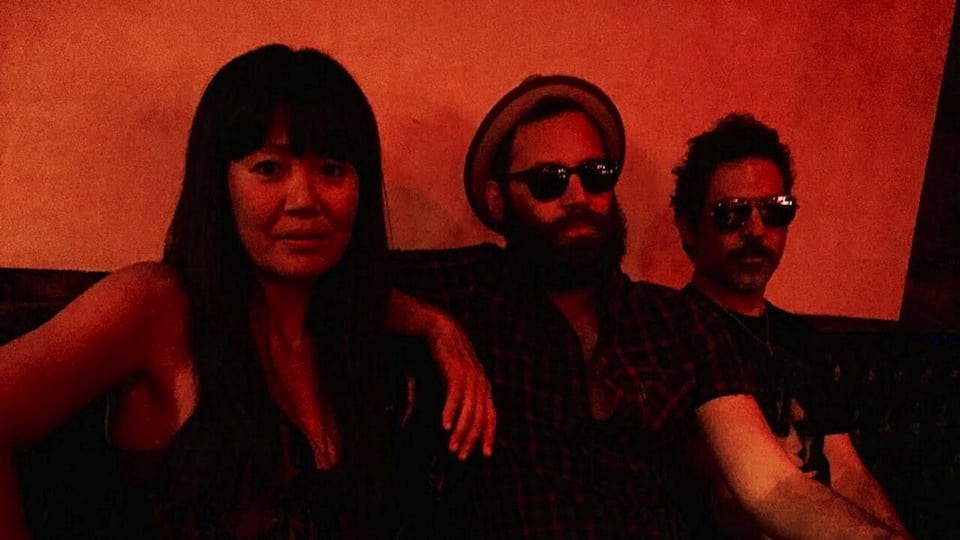 As supergroups go, Vast Asteroid occupies an unusual place when you consider the pedigree of its players. For while the rock resumes of bassist Mimi Starr and drummer Mark Reback include stints with The Warlocks and Slaughter and the Dogs respectively, the band’s frontman James Poulos may be best known as a political columnist with The Week. You don’t often see that kind of crossover and you’re unlikely to be thinking of “The Trouble with Emmanuel Macron” when you’re listening to the band’s new self-titled debut LP (recently reissued in vinyl courtesy of Thinkbabymusic Records).  Then again, the seductive sonic overload these three deliver may have you contemplating The Art of Being Free (which also happens to be the title of Poulos’ new book inspired by Alexis de Tocqueville). Learn more about the band in our interview below.

CultureSonar: When listening to Vast Asteroid, I have to play it loud just so it can wash over me with all its fuzzy intricacies. What would you say would be the ideal environment to hear your music if you could place the listener anywhere in the world with a pair of headphones?

James Poulos: Almost anywhere can be an ideal place to hear music, including places you’re for the moment, stuck in. The ability of recorded music to transform or uplift whichever place you’re in is one of its most important. But it would be hard to beat the California desert at sunset, as the sky gives way to the ocean of stars, as a place to choose for this record.

Mark Reback: I would agree about the desert at sunset, or anytime really. The ideal environment would be at one of our live shows, so the listener is part of the moment and feeling the music being created and delivered live in the moment.

CS: You describe your music as “Spacegaze.” Are there other bands you’d similarly classify? Who are your progenitors?

JP: Your favorite space rock and shoegaze bands probably rank high among our progenitors. But we like moving freely between big melodies to big atmospherics, like some ostensibly more pop or mainstream guitar bands did when Smashing Pumpkins and the Verve were huge. There are some relatively more obscure mid-‘90s art grunge and emo bands that handed some things down to us as well, from Failure and Hum to Bloomsday and The Gloria Record.

MR: We created the term as a combination of space rock and shoegaze, and the bands James mentioned definitely shaped our sound, along with MBV, Spiritualized, and even heavier bands like Queens of the Stone Age.

CS: Your debut album was initially released in digital format last year then reissued on vinyl in 2018. So… What kind of record player do you own yourself? What’s the last thing you listened to on it?

MR: I own an Audio Technica AT-LP120 USB direct drive turntable, and the last thing I listened to on it was the re-release of Queen’s News of the World box set. They were in a league of their own. No one else sounds like Queen.

CS: Vast Asteroid has a thicker, denser sound than most of your 2016 EP Half Apart. What would you say contributed to this evolution?

JP: That would be Mimi on bass. Just as a technical matter having a huge slice of low end makes an obvious difference. But as a musician, she really opened up what Mark and I got good at doing, or enjoying doing. Once we realized how “thick” the three of us could get, it was really gratifying to go hard in that direction.

MR: Yes, adding Mimi on bass really upped the vibe and heaviness factor, plus it allowed us to be a bit more spontaneous and try things on the fly, which led to more of a “band” sound on the LP.

CS: How did Eagles of Death Metal guitarist Dave Catching end up on the new album’s nearly 18-minute-long namesake song? Has he joined you for any live gigs?

MR: Dave is one of the best human beings on the planet. He runs the fabled Rancho de la Luna Studio in the Joshua Tree desert, and was our host for the recording session for the album…

JP: At the end of tracking one night, Dave sagely suggested we all plug in and jam. In the control room, [producer] Andy Freeman sagely pressed “record.” Everyone liked what happened next. We’re eyeing a desert performance at some point not too far off, which would be the time to get everyone onstage without a script…

CS: James, it’s rare to find a lead singer with such an impressive reportorial resume. Do you look at writing lyrics as an escape from your journalistic writing, a complement to it, an antidote?

JP: Well it’s a weird world right now. People feel a growing tension between the importance of staying on top of reality and the realization that more and more information just isn’t worth knowing or engaging. But really, it doesn’t have to be a tension at all. Right now a lot of what people did and cared about in the pre-digital electrical world is crumbling, but a lot of it did more to distort people’s view of reality than to sharpen it. I think electric music is not as much a magnet as it used to be for people trying to get wealthy and famous by freaking out, and there’s an opportunity to use lyrics and melodies and grooves in guitar music to communicate in a more grounded and reality-rich way.

CS: Has Vast Asteroid performed at any literary events yet? If not, is there one at which you’d particularly like to “blow the roof off the house” so to speak?

JP: I’m sure that if Michel Houellebecq ever threw a house party it would be a fun one to play.

MR: I’d love to do a gig at a Festival of Books and blow away some unsuspecting authors and/or readers!

CS: Where’s your favorite place to play in L.A.?

MR: We love The Echo in Echo Park, they really take care of bands there, and the sound and stage is totally pro. We had our record release show at Harvard & Stone in Hollywood, and we have soft spot for that venue and the booker, Charlie Clark. The Roxy is a classic with so much history in that room… Would always be up for a gig there.

0 comments on “Vast Asteroid: The Sound of “SpaceGaze””