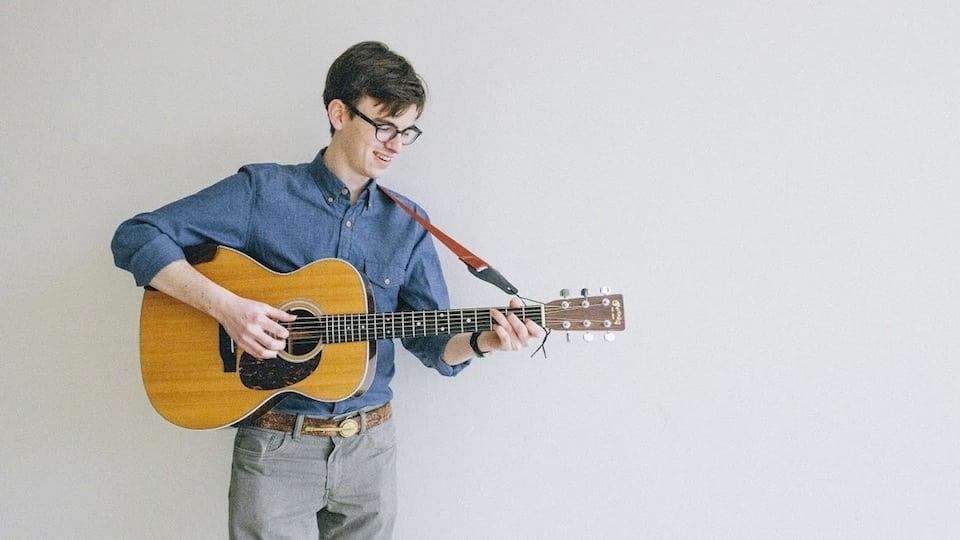 If you haven’t watched CultureSonar’s Wine & Vinyl web series yet, you really should. Each playful webisode pairs a classic album with a wine that accompanies it perfectly. (Ever wondered what goes best with Gaucho? We’re here to help!) Needless to say, finding the right host for the show wasn’t easy: Who really really knows the grape as well as grunge… or classic rock or bossa nova? Luckily for us, we found Josh Turner, a talented singer-songwriter who also happens to be an articulate oenophile. We talked with Josh about both of his passions — as well as the release of his latest LP Naysayer in the exclusive CultureSonar interview below.

A: “Sultans of Swing.” This video was posted to Reddit back in 2012 and was a clear turning point in the rate at which my channel gained steam. I’d say at that time it shifted from linear growth to exponential growth. I haven’t really spent much time on Reddit and can’t speak much more to the phenomenon, but, there you go. Many other videos have been posted there since. It’s anyone’s guess in my opinion why people responded to that particular video. I mean, It’s a well-known song performed reasonably well by a somewhat unsuspecting looking kid, but then, that’s kind of most videos on my channel.

Q: When did you first pair up with Carson for your group The Other Favorites? What was it about him as a musician that made you feel you’d be a good fit?

A: Carson and I first paired up in late ’06/early ’07 after meeting at our eighth-grade talent show. I had just moved to North Carolina and was somewhat desperate for friends, so meeting another musically inclined, somewhat eccentric person felt like a bit of a godsend. A third fellow by the name of Cole Gage, who was in the audience for the performance, was the one who actually got in touch with both of us later and suggested getting together to play. Finding kids in eighth grade who have the actual talent to match the bravado that inevitably comes with being a 14-year-old musician is a rare thing, and both of these guys had that. We naturally hit it off socially as well as musically, which is why I think we’re still playing together today. We played as a three-piece outfit through most of high school and went our separate ways during college. Carson and I reunited post-college, but we’re still in touch with Cole and get to see him every so often.

Q: Your CultureSonar web series Wine & Vinyl draws on your knowledge of wine as well as music. Have you worked as a sommelier? From where do you get your vast knowledge of the grape?

A: I try never to miss an opportunity to couch anything I say about wine in the fact that I have no formal training. I am a wine enthusiast, but couldn’t be further from a wine expert. I’ve worked with wine in a retail setting for about three and a half years now, and with enough interest, you can easily pick up a good amount of knowledge along the way in that period of time. Anything I know or claim to know about wine comes exclusively from selling and enjoying it (and visiting the odd vineyard). My wheelhouse is music, and I reckon I know just enough about wine to connect the two.

Q: For the series, you usually pair a wine with a particular album but if you were to work in reverse, what album might you pair with a simple bottle of Chianti?

A: To work in reverse… A nice simple chianti — so not a classico or a riserva, unoaked or very little… medium body, bright berry fruit, moderate tannin, hmm. I’d pair it with Leon Bridges’ debut album Coming Home. Like the wine, the album sounds familiar but still fresh, is very easy to listen to, is summery, and is simple, but not to its detriment.

Q: A handful of tracks off your new album Naysayer have already appeared on your YouTube channel. Which one do you think you’ll turn into a video next? Do you have a concept yet?

A: We are going to take a short break in posting tunes from Naysayer on the channel since all of June was three consecutive songs from the studio. We actually shot video of the entire album recording process, but as the audio was our primary concern, the videos from the studio all more or less look the same. When we get back to posting things from the album, as we will in a month or two, we’ll be confronted with the decision whether to post more videos from the studio (the audio being the album version) or find a nice location and do a “live,” alternate recording of the song. Perhaps we will do a bit of both.

Q: “Sketch 1” and “Sketch 2” are substantially more experimental and ambient than the other songs on the album. What made you decide to include these on Naysayer? Did these entail a different creative process?

A: The sketches came from a 45-minute session on the last day of recording when we asked our two string players to improvise together some 30-45 second ideas. We didn’t know if we’d keep any of it (and there’s far more of the session that wasn’t used) but decided the two that we kept served a useful purpose in bridging some of the energetic shifts in the record. It also gives an opportunity for Jacob and Grant’s extraordinary ensemble playing to be enjoyed on its own for a moment, as opposed to being nestled within a larger arrangement. If there was a theme to the creation of the album in general, it was saying “yes.” We deliberately gave ourselves a tight — doable, but tight — timeline at every step of the production process so we couldn’t “naysay” our way out of having a finished product. It was an exercise in the uninhibited creation of ideas with no time to wonder if they were valid. So when we thought, “Let’s give the strings an opportunity to stretch out,” it was as good as already on the record. And personally, I think it provides a necessary contrast to a record on which so much material is so easily accessible to a listener. Prettiness becomes mundane when devoid of contrast.

Q: You guys have done quite a bit of touring. What’s your favorite city to play in and why?

A: We haven’t done nearly as much touring as you might think. While we do have a prospect to ramp that up considerably on the horizon, as it stands, our performances have been pretty sporadic, albeit widespread. When Carson and I were asked to come perform in the northwest of France in fall of 2017, we wound up playing one favorite show after another, at least for me. One night we played a traditional pub, the next night we packed a 250-cap club, a few nights later we played a “fest-noz” (think barn dance, but with crepes). Brest, Plabennec, Plouguerneau and the small towns of Brittany, then, are all among my favorites.

0 comments on “Josh Turner Knows His Wine and His Vinyl”