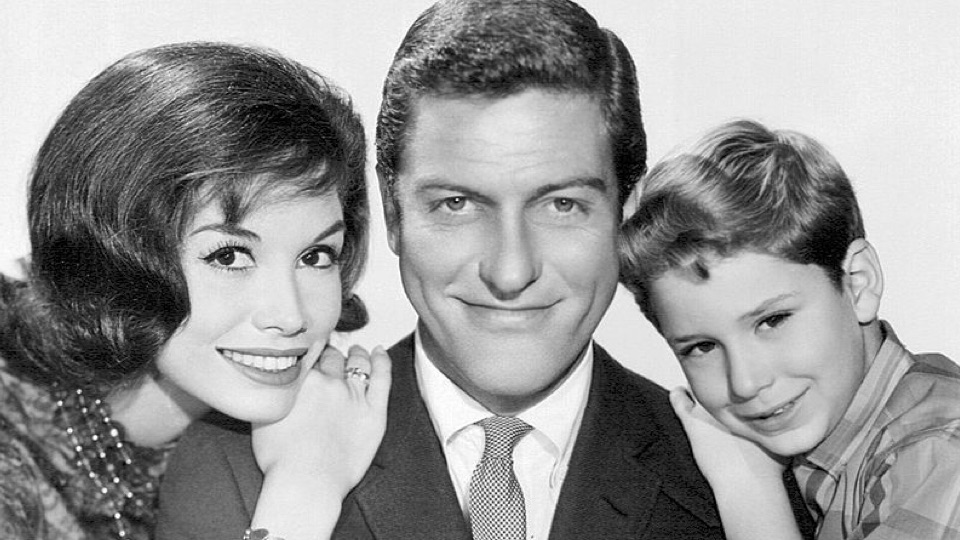 For those of us of certain ages, old sitcoms serve as healing, laugh-filled time machines. Many hold up remarkably well and are available to binge on with impunity. Here’s a worthy sample of classic sitcoms from a 20-year period that will appeal to those in need of some escapist, hilarious TV.

Related: “From Dickens to Bingeing: The Roots of Serial TV”

A quirky throwback that was both of its time and slightly ahead. Dobie Gillis was the first show to have angsty adolescents as the main characters. Dobie was a regular, mid-century suburban teen who wanted to minimize work and school tasks and find himself the perfect squeezable girlfriend. His best buddy, Maynard G. Krebs, played by proto-Gilligan Bob Denver, became the breakout character – a lovable beatnik who laid out the hipster patois and laid-back attitude. Dobie broke the “fourth wall” when he chatted to the audience at the beginning of the show; superstars Warren Beatty and Tuesday Weld got their starts here. It’s a piece of innocence before the Kennedy assassination, a combination of malt-shop sweetness and self-aware edge.

Widely regarded as one of the finest shows of its genre, The Dick Van Dyke Show takes us inside the comedy writer’s quarters of the fictitious Alan Brady Show. We also step into the cozy family life of head writer Rob Petrie (Dick Van Dyke), his dancer-turned-housewife Laura (Mary Tyler Moore), and spirited son Richie (Larry Mathews). Rob hilariously collaborates with his co-workers, played with zest and warmth by Morey Amsterdam and Rose Marie. The late great Carl Reiner created this congenial masterpiece; its superb writing and direction is enhanced further by the amazing chemistry of the characters and Van Dyke’s physical comedy chops. It famously opens with Rob tripping over an ottoman (and, later, side-stepping it), laying the reliable groundwork for 22 minutes of pleasure.

Viewed by many as the finest sitcom of all time, and an even bigger feather in Mary Tyler Moore’s flung cap. Here she plays Mary Richards, a single woman who moves to Minnesota after a break-up and blazes her career path in the fictitious newsroom, WJM. Mary is beautiful, kind, and resourceful, a gentle feminist icon in an era just beginning to countenance the notion of a young woman living a vibrant life without the need for a husband or children. Though there was an amusing misperception at the outset that Mary’s character was deserted by her former beloved sitcom husband Rob Petrie, The Mary Tyler Moore Show quickly established itself as a classic in its own right. A perfect ensemble piece, it co-stars Ed Asner, Valerie Harper, Gavin MacLeod, Ted Knight, Betty White, and Cloris Leachman all of whom went on to enormous success. Mary’s iconic “Love Is All Around” theme song sets the tone and her joyous freeze-framed hat toss has become an enduring image of triumph.

A show of astounding heart and depth. Producers Norman Lear and Bud Yorkin brought us Archie and Edith Bunker – a working-class couple from Queens, New York, who were like nothing we had seen on TV before, but we probably recognized parts of them from our own lives. Archie (Carroll O’Connor) was a man who was under-educated, bigoted and squirming in a world that had turned on his notions of how life is supposed to be. He may have called his beloved wife “Dingbat,” but Jean Stapleton played Edith Bunker with a core of inner wisdom. Archie and Edith live with their daughter (Sally Struthers) and card-carrying liberal son-in-law (Rob Reiner). Volatile arguments about race, war, and politics were the norm. What’s extraordinary about Archie is that despite his seeming closed-mindedness, he’s trying to hold fast to a world he no longer understands. But throughout it all, he works hard to adapt to his circumstances and provide for his tribe. All in the Family is a powerful show about the unconditional love of family. It’s no wonder that the Bunker’s upholstered chairs are on permanent display at the Smithsonian.

Comedian Redd Foxx was revered for his LPs and stand-up routines in the 1960s that were (for the time, or perhaps for any time) incredibly filthy and politically incorrect. He spoke his mind with swagger and ballsiness. Now, while he couldn’t bring that level of prurience to a “Family Hour” sitcom, Sanford and Son was edgier than most. Touted as a black counterpart of Archie Bunker, Foxx plays junk dealer Fred Sanford, a grumpy, hapless widower who runs his business in South Central Los Angeles with his adult son Lamont (Demond Wilson), a mostly peaceable young man who can’t quite liberate himself from his irascible dad. The show holds up fabulously, even with its vulgar humor, due to the comic skills of the cast and Foxx’s epic skirmishes with his sister-in-law, friends, and foes. Fred’s catchphrase, “Did you hear that Elizabeth…I’m comin’ to join ya, honey!” as he grabs his chest and fakes a heart attack to get out of any responsibility is still evoked to this day. It also has the swingin’-est theme song, courtesy of Quincy Jones.

Bob Newhart has been serving up his gentle brand of “button-down” humor for the past 60 years. His LPs, featuring his one-sided phone schtick, are still revered and led to not one but two series named after him. In this, his first, Newhart plays Chicago psychologist Bob Hartley, phlegmatic straight man amidst a sea of lovable goofballs including the hilariously neurotic crew in his group therapy sessions. His subtle comic stutter is reassuringly in evidence, along with frequent one-sided phone calls that elicit joyful uncanned laughter from the live studio audience. He is blessed with a gorgeous wife (Suzanne Pleshette), whose snarky wit and unwavering love add a little grounding and grace to the proceedings.

There’s no diminishing the mean-spiritedness and dated humor of this short-lived and much-loved show. But in John Cleese’s capable comic hands and inspired madness (along with that of his then-wife Connie Booth), the laughs keep coming. Fawlty Towers ran for two disconnected seasons, one in 1975 and one in 1979. It revolves around the misadventures of Basil Fawlty, a snobbish, perennially agitated innkeeper who makes no secret of the contempt in which he holds his guests.

Surrounding him are his snarky wife, tolerant maid, and Spanish waiter, whose manglings of the English language would likely not make it to air today. Fawlty is a damn fool, but a relatable curmudgeon for any era. The premise came from Cleese’s reaction to witnessing real-life Donald Sinclair, owner of the Gleneagles Hotel, in action. Cleese deemed him “…the rudest man I have ever come across in my life” and fashioned a classic comic series around him. What a way to turn agita into art!