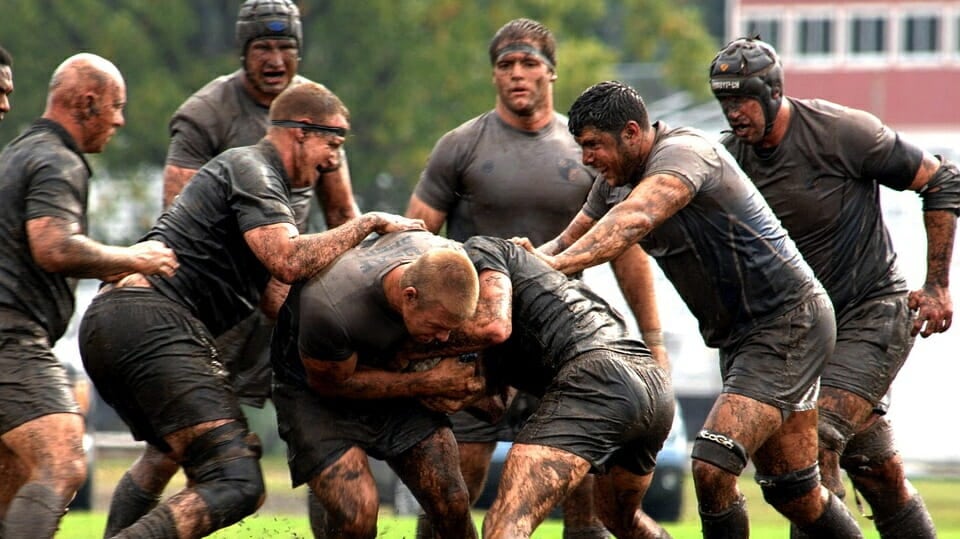 Almost unobserved in America – even among those deeply interested in sport – the current Rugby World Cup has showcased 46 matches involving twenty nations over the past four weeks. As in any other global tournament, there have been ludicrously unbalanced results (e.g. Argentina’s 54-9 shellacking of Georgia), nail biters (including Australia’s hotly debated 35-34 edging of Scotland) and a handful of historic upsets, best exemplified by Japan’s gritty early-round triumph over the highly favored South African Springboks.

Rugby – in its fast-paced seven-per-side form – will be an Olympic sport in Buenos Aires in 2016 for the first time since 1924 when America won its second consecutive Olympic gold, beating France in the final. NBC, with broadcast rights to Buenos Aires, is gradually introducing rugby to American audiences and will air the 2015 RWC final on Saturday at noon Eastern. The match, to be played at London’s Twickenham stadium, features the two top-ranked teams in the world, New Zealand’s All Blacks and Australia’s Wallabies in a contest with deep competitive roots and the potential for an historic matchup.

As Americans gradually discover the excitement of rugby, the question arises: What’s the essence of this exotic sport? What will viewers find in it?

The game’s rules aren’t complex, standing as they do at a kind of midpoint between soccer (from which rugby evolved) and American football (which itself grew out of rugby). Concentrate a football line-of-scrimmage into a rugby scrum, add some hard tackling and watch what happens when all 15 players can run and kick. The game is easily intelligible to the newcomer.

Like soccer, the clock runs continuously. Few Americans will be disappointed with the lack of commercial breaks, segregating advertising into pre-game and halftime pods.

But what’s this sport really all about? All professional sports feature immensely skilled athletes performing at a high level of strategy and technique, all superbly conditioned and all burning with competitive fire.

Observers of last weekend’s two do-or-die semi-final matches would be struck by one commonality. Both matches were taut, disciplined affairs with the outcome in doubt until the end. Argentina, who finished on the losing end of a 29-15 semi-final with Australia, fought desperately, unpredictably and optimistically for every meter of territory, exhibiting bravery and conviction for 80 hard-fought minutes. South Africa’s Springboks lived up to their reputation for unrelentingly physical defense and defused the fast-paced All Black attack so profoundly that only in the final seconds was New Zealand’s 20-18 victory assured.

At the final whistles, after 80 relentless minutes, players fell to the ground in exhaustion. Blood mixed with tears on many a face. Too beat up and ground down from physical exertion, there were no conclaves of exhilarated players, no preening, made-for-tv celebratory dances and no raised-arm victory laps. Instead, Wallabies and All Blacks, Springboks and Pumas looked around the pitch for opponents, making eye contact in acknowledgement of a battle well fought and an adversary demanding their best effort. After two hours of brutality and exertion, the unspoken question was “Were we good enough?”

There are no specialists in rugby. No designated hitters or special teams players. Until relatively recently no substitutions were allowed and players played on through injury – or the team finished with less than 15 on the field. Players exhaust themselves in running, tackling and the monumental physical effort of scrums, rucks and mauls. International rugby fixtures are called ‘tests’ – and the World Cup final will certainly be a test of resolve, courage and commitment

Americans will find in rugby the essence of something notably lacking in the over-commercialized major US team sports, with legions of coaches – and players who seldom make key strategic or tactical choices of their own.

The warrior spirit is best exemplified in New Zealand’s legendary haka, a Maori war chant performed before each test match. Opponents stand determinedly opposite the All Blacks’ chant and threatening gestures, enlivening their own warrior spirit and plotting their own victory. Warriors respect their adversaries. Unlike the bulletin-board sniping of many US athletes, even at the highest level ruggers socialize with opponents after the match. Respect is built both on and off the field of play.

Maybe it’s the money. Top rugby athletes are paid less than the salary minimums of baseball, basketball and football leagues. They aren’t brands. They aren’t marketing franchises. If they’re on camera, it’s in a match, not an ad campaign. There’s no warrior equivalent to baseball’s cautious pitch counts and the refusal to play that increasingly exemplifies pro athletes’ perceptions of themselves as an economic entity first – and a teammate or competitor second.

October 25th was the 600th anniversary of the Battle of Agincourt, immortalized on the stage by the St. Crispin’s Day speech penned by William Shakespeare for the young Henry V. Rallying his vastly outnumbered soldiers to the cause, Henry memorably calls his troops to be warriors:

We few, we happy few, we band of brothers;
For he to-day that sheds his blood with me
Shall be my brother

Americans encountering rugby for the first time – perhaps in Saturday’s World Cup final – will feel the intensity of this brotherhood, the entirety of commitment to the athletic cause, the perseverance through blood, pain and adversity.

And perhaps ask of traditional American sports: Where are the warriors?