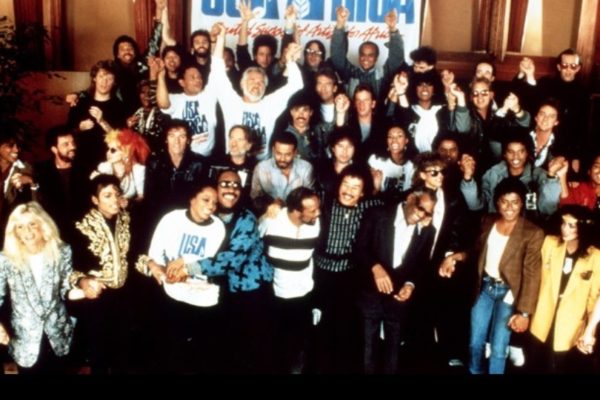 The sign at the entrance to the recording studio famously read, “Please check your ego at the door.” And that sign was needed: a raft of top talent was pouring in to cut a charity single and video, and it was anybody’s guess who might try and steal the spotlight. Or demand Cristal and brown M&Ms. It was the recording of “We Are the World,” a project meant to benefit the newly-formed “USA for Africa” and raise funds for famine relief. The project was inspired by the UK’s Band Aid and their earlier song/video “Do They Know It’s Christmas?”

The song was written by Michael Jackson and Lionel Richie, and produced by Quincy Jones. The main recording session was set to take place on January 28, 1985, the night of the American Music Awards in L.A., when many artists would be in town.

That night, after the ceremony, the limos pulled up, and everyone from Bruce Springsteen, Stevie Wonder, Kenny Loggins and Diana Ross to Huey Lewis, Willie Nelson, Sheila E. and Ray Charles entered the studio.

The end result of the epic all-nighter was a perfect slice of ‘80s cheese: a huge charity single that raised $75 million but remains best known for its competing vocals and wimpy lyrics (sorry, Michael and Lionel – but it’s true).

I mean, who can forget Cyndi Lauper practically stroking out on her section…or Bob Dylan muttering through his portion? Springsteen gave his part the usual clench-jawed, working man passion, while Willie Nelson just seemed…well, a little high. Of course, there were those in the “chorus” – like the blank-eyed Pointer Sisters, various Jackson siblings (clearly there because of brother Michael), and…Dan Aykroyd? OK, then.

The initial airing of the video was an event, with many TV channels (and of course, MTV) broadcasting it simultaneously. Despite its 80s supergroup cheesiness, “We Are the World” eventually won four Grammys for the song and several honors for the video.

Did you watch it?  Who stood out and who flamed out?  Do you miss “supergroups” and if so, who would comprise yours? Weigh in here or on our Facebook page.

PS. For more on Midge Ure, the co-founder of the supergroup Band Aid, check out our post The “Other” Live Aid Guy. You may also enjoy our posts Becoming Michael Jackson and Forty (!) Years Later, “Songs In The Key of Life” Is As Fresh As Ever.

0 comments on “Where Were You When…You First Heard “We Are the World”?”