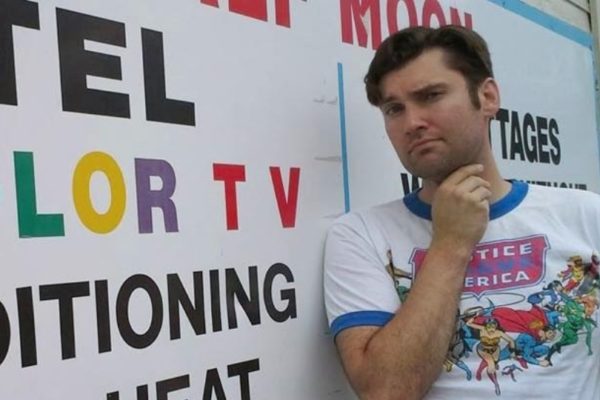 Ken Reid takes TV very seriously. The Boston-based standup comic figured out a way to turn his lifelong television obsession (and complete collection of TV Guide from 1965 to 2000) into a podcast that amounts to a public service. Every week Reid shares his weapons-grade TV expertise with the world on TV Guidance Counselor, along with a guest list that has included comedian Eugene Mirman, actor Ted Danson, rocker Marshall Crenshaw, and late night personality Elvira — each of whom has been prompted to pick a copy of TV Guide from the pile so they can discuss the shows they would’ve watched that week.

[amazon template=right aligned image&asin=B0000BV1XX]Reid confesses he stopped paying attention to new shows around the millennium. “I let my TV Guide subscription lapse,” he reveals. An era of particular fascination for Reid, and one that his guests often bring up, is the ‘80s. Reid maintains that the ‘80s were the swan song for blue-collar characters on TV. “From The Honeymooners to Roseanne we had a 40-year history of these sort of working class, struggling people in comedy who were really utilizing the coping mechanism that comedy is,” he observes. “And as that went away I think some of the weight of a lot of the shows went away. I think people have become less comfortable with seeing their real life reflected on a show and want more of a fantasy.” Musing on some of his favorites, Reid remarks, “Kate & Allie is probably not an obvious one, but if you look at the main conceit of that show, it’s these two divorced women who are sort of forced to move in together so they can financially raise their kids. Golden Girls is the same thing; the conceit of that show is that these women don’t have any money, they’re retired women and they need to band together to survive. And we’re not seeing those sorts of stories too often anymore.”

As a heavy-duty horror fan, Reid notes that today’s horror-oriented shows are a world apart from their ‘80s ancestors. “Because TV now is so permissive we can focus too much on the violence and the physical pain-based horror,” he says, “and I think that makes people lazy as creators. Whereas, when you’ve got…even more low-rent things like Monsters and Tales From the Darkside and Freddy’s Nightmares, they had to do an allegory to make the story compelling because you couldn’t get away with the sort of gore or shock that you can on TV now. Because they had to work around [Broadcast] Standards and Practices, they often came up with much better, more timeless messages than they would otherwise.”

Seeing punk pioneers The Damned perform on transgressive ‘80s Britcom The Young Ones was a pivotal experience for Reid. “It was this crazy, spooky, energetic music I had never heard before, and it’s that thing where you hear a song or see a movie where you realize that’s everything you like in the world and you just didn’t know it until that point,” he remembers.

For Reid, the ‘80s were rife with great musical moments on TV. “MTV’s 120 Minutes was huge for me,” he recalls. “I used to tape that every Sunday starting about ’87. I would watch it with a pen and paper and mark down all the bands I liked on it. Also USA Network had a show called Night Flight that was on every night from 11 to 5, and you never knew what you were gonna get on that show. That’s the first place I saw Another State of Mind and The Decline of Western Civilization and a lot of those punk rock documentaries, and crazy old footage of people like Little Richard.”

All the memories framed by TV Guide on Reid’s show tap into something powerfully personal, no matter who’s doing the reminiscing. Reid reckons, “One of the reasons TV Guides generally are so fascinating to me is because they were made to be disposable. They were literally made to be relevant for one week and that was it. And because of that, they end up being this perfect snapshot of a particular time and place, and the thoughts and events of the time. And I think part of that is that they weren’t editing stuff for posterity. It was just literally going, ‘This is what’s happening this week. These are the hopes and fears and thoughts that are going around in the air.’”

“And I think that trickles over into TV shows too, because when you get these things that try to be timeless they tend to be very, very dated. And the things that seem to be more ‘in the now’ tend to be more of a thing that I’ll gravitate to, because it has a time and a place and a stamp to it. It’s not anachronistic — it’s kind of more sincere.”

Ken Reid’s comedy album The Vanity Project Vol. 1 is available at his website and at iTunes. His podcast is available both at www.tvguidancecounselor.com and on iTunes.

PS. What were your favorite TV shows from the ’80s? Check our our top 10 list here. Plus, you may also enjoy our post Why Comedy Is Booming Again.