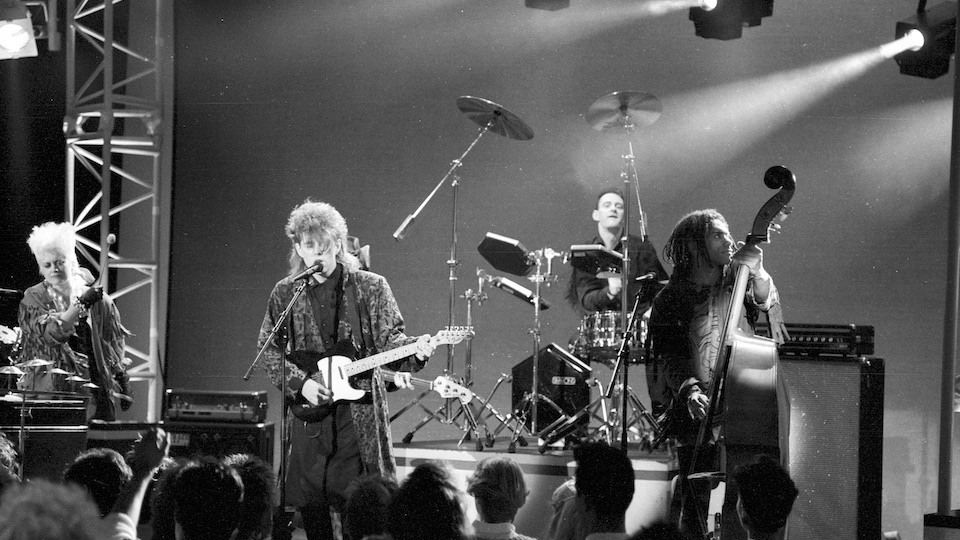 Tom Bailey made a triumphant return to mainstream music in 2018 with the release of his LP ‘Science Fiction’, which was met with critical acclaim. With it, of course, came all the questions the star has no doubt faced over the years with regard to his old band, The Thompson Twins. Once an iconic face of the ‘Second British Invasion’ of US pop charts in the early 1980s, the band found mainstream success both in the US and the UK. However, while they tore up the charts with hits such as “Hold Me Now” and “Lay Your Hands On Me” at one moment, the next – they were gone.

Confusingly for many people at the time, the Twins numbered more than two, and none of them were related. They started out as a relative tribe of seven, in fact, only to fall down to a core trio by the time their second professional LP, Side Kicks, hit the charts. Bailey was flanked by Alannah Currie (whom he had been in a relationship with since the late 70s) and Joe Leeway – and this line-up, ultimately, is the face of the band people tend to remember. The group actually started as a punk outfit, fuelled by activism against the norm – and yet, in a few short years, became pop royalty. Ironically enough, they’d be reversing this by the dawn of the 90s.

It took the Twins a fair amount of time to ‘break’ America. While the band’s initial offerings had done well in the UK, it wasn’t until Into The Gap released in 1984 when mainstream US listeners really started to sit up and take notice. The band was iconic for their outlandish fashion, their slick synth work, and Bailey’s earnest, unmistakable vocals. There was something different, something avant-garde about The Thompson Twins which set them apart from the synthpop crowd of the time. You’d also hear Bailey playing synths on Foreigner’s “I Want To Know What Love Is,” one of the most iconic pop hits of the era.

The fact was, while plenty of bands were able to replicate the smooth, silky synth sounds that the Thompsons perfected, none of them looked quite like them. It was certainly their unashamed, outlandish style and unique aesthetic that helped to propel them into becoming household names. They were loud, they were grandiose – they were hard to ignore.

They also created undeniably catchy records. To this day, you’ll likely still hear “In The Name of Love” or “You Take Me Up” played by radio stations across the US. While the band’s name may not hold quite as much gravitas these days, there’s a very good chance you’ve heard one of their songs, even if you haven’t heard of the brand.

Many people will remember the Thompsons doubling-up with Madonna during Live Aid. The “Like A Virgin” star had emerged as pop’s hottest property by 1985, and she’d joined the band on-stage as a backing singer on the Philadelphia leg of the colossal concert. Nile Rodgers, too, joined them on rhythm guitar – they were in good company. Bailey commented to press years later that he was “hardly aware of (Madonna’s) contribution at the time”, stating that “it was a contribution of fame, rather than notes.”

Rodgers, in fact, had been brought in to support the Thompsons after Bailey suffered nervous exhaustion while recording the follow-up to Into The Gap. 1985’s Here’s To Future Days was another big hit in the UK and the US, having firmly rooted at a peak of no. 20 on Billboard. Future Days was an album that encapsulated the band’s spirit – positive, action-conscious songs, embellished by a cover of The Beatles’ “Revolution,” made for a revolutionary record seemingly wrapped up in populist synth-pop.

However, in two short years, things changed dramatically for the group. Leeway chose to leave the band, leaving Bailey and Currie reduced to a duo. 1987’s Close to the Bone never reached the heights of Future Days – this LP took on a more subdued, introspective flavor, inspired by difficult moments in the duo’s lives. By 1988, they were publicly a couple and would marry as of 1991. In the time in between, Currie and Bailey released the far rockier, yet still politically-charged Big Trash in 1989.

Despite being seen by some as a return to form, and possibly even a renaissance after the difficulties faced by ‘Bone’, ‘Trash’ failed to chart in the UK, and scratched no. 143 in the US. It would, sadly, be the last time that The Thompson Twins would see an LP chart – on a global scale. Their 1991 collection, Queer, was the band’s swansong before Bailey and Currie would rebrand as Babble for two further collections. By this point, the duo was ready to cast off the shackles of mainstream pop and to try and push a more challenging aesthetic.

Bailey and Currie relocated to New Zealand and had two children, before divorcing in 2004, having since remarried other people. Bailey has entertained the idea of bringing the Twins back together to tour in the past – in a recent conversation, however, he states Currie had ‘no interest’ in returning. Her thoughts on reforming the Twins are well-documented. “I’d rather vomit on my boots,” she’d confirmed to press in 2008. She now operates as an artist under the title Miss Pokeno, based in London. Leeway, meanwhile, is a registered hypnotherapist, having been instructing for over 20 years.

This brings things back full circle – with Bailey having decided in recent years to bring Thompson songs back to the road. The ongoing thirst for 80s music to be revived is very real indeed – and Bailey has continued to honor this by playing fans’ favorite hits while generating new work of his own. He’s continued to tour with the likes of the B-52s and Howard Jones, among many others.

The Thompson Twins are a curious collective. In just 13 short years, they went from being anti-establishment, to pop superstars, to avant-garde music revolutionaries. Their journey may have been short, but it was certainly fascinating.

4 comments on “Whatever Happened to The Thompson Twins?”