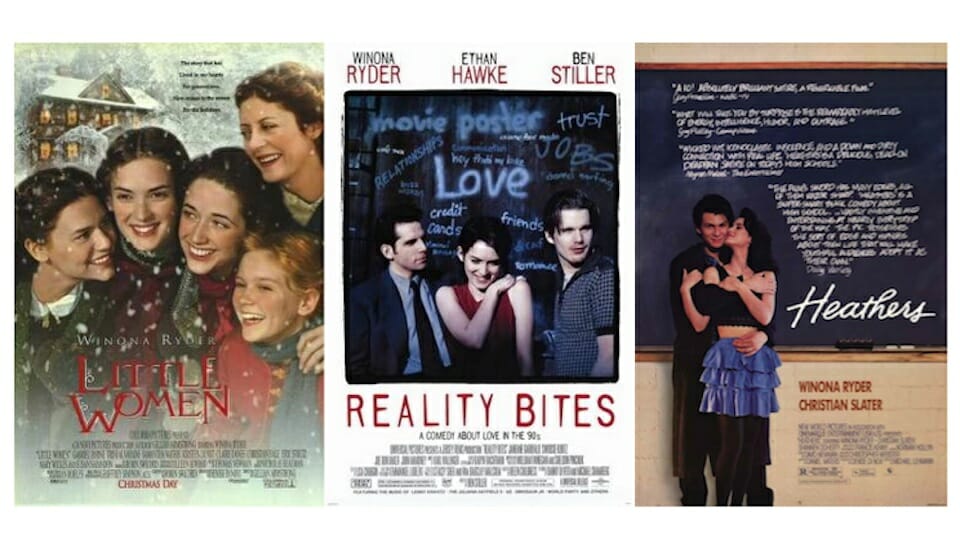 If you haven’t heard yet, Netflix has a new series coming out on July 15, helmed by none other than Winona Ryder. An offbeat thriller about a mother’s search for her son who’s suddenly disappeared, the show Stranger Things is set in the ‘80s and looks to be the perfect vehicle to introduce a whole new generation to an actress who is, without question, one of that era’s most iconic stars.

Like most people, my first introduction to Winona Ryder was through her collaborations with Tim Burton: first in Beetlejuice where she played the “strange and unusual” Lydia Dietz; then as blonde cheerleader Kim Boggs in Edward Scissorhands.  On the surface, Lydia and Kim seem nothing alike, but in truth, the two teens have plenty in common. Both struggle to conform to their environments: for Lydia, a staid, country house away from busy New York City; for Kim, a candy-colored suburbia that’s not as accepting as initially thought. Lydia and Kim are each lonely teens in search of real love and acceptance.

As a teen myself, I recognized these same qualities in Heathers’ Veronica, too, in which Ryder plays yet another intelligent young woman plagued with ennui as she searches for something genuine in life. Ryder’s portrayals tapped into my own discordant feelings about my rural hometown and the ways I didn’t fit in. I identified with these young women (and Ryder herself) on a visceral level. She shrewdly found ways of bringing complex feelings to life while also managing to be really funny and spunky at the same time. I loved her instantly. It’s a tricky balancing act for any teenager, but Winona Ryder did it all with total aplomb — impressing critics, audiences, the world.

The real piece de resistance for me was Ryder’s Academy Award-nominated turn as Jo March in Gillian Armstrong’s definitive 1994 movie adaptation of the novel Little Women.  At first glance, she doesn’t seem like a natural fit: How could an actress known for playing contemporary, sardonic teens embody one of the most beloved heroines of YA lit?  But just like Ryder’s previous roles, Jo is a young woman struggling to adjust to her times. Her entire internal conflict is summed up perfectly in her own words just after rejecting best friend Laurie’s marriage proposal, “I love our home, but I’m just so fitful and I can’t stand being here! I want to change, but I can’t, and I just know I’ll never fit in anywhere.”  Ryder’s tear-stained face conveys Jo’s exasperation with both herself and a world that doesn’t seem to have a place for her. Who hasn’t felt that way as an adolescent?

And while Winona Ryder had a successful career throughout the ‘90s (Reality Bites, The Crucible, Bram Stoker’s Dracula and the underrated Girl, Interrupted), her personal life told a slightly different story. After a very public break up from Johnny Depp and a failed two-year relationship with Matt Damon, the actress found herself suffering from clinical depression and exhaustion. Then came the 2001 shoplifting incident that led to fines, probation, and community service.  Like so many of the characters she had played, the actress was suddenly lost, searching for something else, an outsider to the nth degree.

Happily, after a brief hiatus, the resilient Ryder has reemerged sober, happier, and surer of herself, by focusing her attention on indie films with directors like Richard Linklater (A Scanner Darkly), David Wain (The Ten) and Heathers scribe Daniel Waters (Sex and Death 101). Ryder has become mainstream once again in a big way by turning up in small but memorable parts: Spock’s mother in Star Trek in 2009 and deliciously off-kilter ex-ballerina Beth MacIntyre in Black Swan in 2010.  She’s followed up with excellent work in the serial killer flick The Iceman and HBO’s miniseries, Show Me a Hero.  With her buzzy, new 1980s-set supernatural thriller series, Stranger Things, hitting Netflix on July 15, Ryder’s resurrection is now complete. We’ll definitely be tuning in to embrace our own inner weirdness as well as hers once the show arrives.

0 comments on “An Appreciation of Winona Ryder”