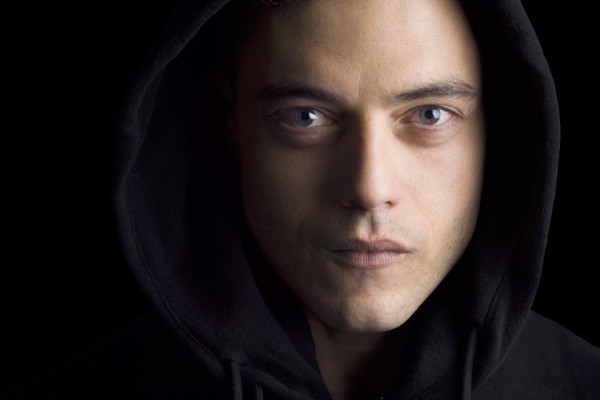 Television viewers have certainly been spoiled of late.  It seems the place to find great stories and great acting these days is the small screen, rather than the silver screen, and that helped make 2015 a banner year for TV. By some estimates, over 400 scripted series aired last year. Instead of a “best-of” list, I’ve ranked the shows of 2015 that I enjoyed most and gave some reason as to why you should check them out before they return to air this year (with a few tragic examples of shows that have either run their course or were prematurely cancelled — looking at you, Hannibal). It would take an incredibly long article to recognize all the smart, compelling TV shows that graced the air last year, and I’m sure I have left off some deserving shows, so please feel free to post your favorites in the comments section! And now, without further ado…

Mr. Robot (USA Network)
A newcomer in 2015, Mr. Robot is poised to do for USA what Breaking Bad and Mad Men did for AMC. From the mind of auteur creator Sam Esmail, comes the story of a cyber-security engineer by day and disturbed vigilante hacker by night attempting to undermine an evil conglomerate. Remi Malek’s performance as mentally unstable Elliot Alderson is outstanding. The show’s use of an unreliable narrator makes multiple viewings a joy, rewarding viewers for their patience as Esmail unwinds a masterful narrative in an evil and corrupt world where not everything is precisely as it seems. Oh, and if you needed more convincing to tune in, Mr. Robot just won both the Golden Globe and Critics’ Choice Awards for Best TV Drama. Season 2 will debut later this year.

The Leftovers (HBO)
After an incredibly polarizing first season, co-creator Damon Lindelof has pulled off one of the greatest turnarounds in television history. The basic concept behind this show is that a mysterious event occurred on October 14, 2011 in which 2% of the world’s population disappeared. The first season may have been a bit bleak, concentrating on the immediate effects of such a loss. The second season, however, focuses on rebuilding, family and finding hope at all costs. In fact, the show moved the entire production from suburban New York to Texas to create the feeling of a near reboot. The writing this season is incredible and Justin Theroux is a revelation as Kevin Garvey. The show reaches a high watermark in the episode titled “International Assassin” which may be one of the greatest episodes of any show ever. Those who are patient with this show will be rewarded.

Fargo (FX)
Creator Noah Hawley takes the 1970s Midwest and brings it to life in a bloody, compelling narrative that feels more like a 10-part movie than anything on TV. Boasting an incredibly talented ensemble cast, the show deftly weaves humor, drama, violence and a hint of hippie weirdness into a series that the Coen brothers would be proud of. The show touches on larger themes that bring an extra layer of depth and tops it off with a sprinkle of the extra terrestrial, which prevents the show from becoming too dark amid all the violence.

Master Of None (Netflix)
An original comedy from Aziz Ansari and Alan Yang, Master of None has hit a cultural goldmine that is quickly resonating with a wide audience. The show is a comedic focus on the personal, professional and romantic woes of an actor in his early 30s living in NYC. The show is broken up into ten chapters that together tell an overarching narrative, but are enjoyable individually as well.

Show Me a Hero (HBO)
This six-hour miniseries from David Simon (The Wire) and writing partner Bill Zorsi is a myopic focus on big-city race relations in America. Based on the true story contained within Lisa Belkin’s book of the same name, Show Me a Hero begins with a late-1980s Supreme Court ruling that Yonkers, a mid-sized city just north of Manhattan, must end segregationist housing practices and build low income townhouses in the predominantly white parts of town. The miniseries is anchored by Oscar Isaac’s sublime performance as Nick Wasicsko, the mayor of Yonkers who has bitten off far more than he can chew. Director Paul Haggis (Crash) takes public housing and local government and spins it into a compelling narrative by highlighting both sides of the issue: the somewhat racist white locals looking to protect their “property values,” and the disadvantaged minorities who are looking for a safe home to raise their families.

Rick and Morty (Adult Swim)
2015 brought us the second season of this original animated comedy series about alcoholic mad scientist Rick Sanchez, his cautiously timid grandson Morty, and their misadventures throughout the universe. Truthfully, there is no description that can possibly do this hilarious show justice. Co-creators Justin Roiland and Dan Harmon (Community) have stepped so far outside of the box that the box is now in a different (metaphorical) universe. The creators take insanely creative plot concepts and develop a world that pushes the limits of human imagination and reinforces the idea of the inescapable chaos of everyday life. With a strong supporting voice cast (Chris Parnell, Sarah Chalke and Spencer Grammer) and incredible guest stars (Stephen Colbert, Jordan Peele, Keegan-Michael Key, among many others) there’s no reason not to watch.

The Jinx: The Life and Deaths of Robert Durst (HBO)
This true crime/docu-drama was arguably the most influential series to air in 2015. Director Andrew Jarecki was inexplicably given direct access to Robert Durst, and carefully uses a series of interviews with the real estate scion to investigate theories that Durst may have killed his wife Kathy, who mysteriously disappeared in 1982. The show investigates Durst’s alleged involvement in the murder of his longtime friend and confidant Susan Berman in 2000, building to a conclusion that one must see to believe. This is one of a few shows that continues to have serious real-world implications.

Narcos (Netflix)
One of Netflix’s strongest new original series (there were quite a few in 2015), Narcos is the story of the rise of Pablo Escobar from family man to the most powerful drug magnate in history. This facts-based series creates an aura of authenticity, both in its heavy use of Spanish (with subtitles) and in its gritty re-creation of Escobar’s rise to power. Avoiding glamorizing the war on drugs (as was the case in Scarface), the showrunners humanize all characters involved by telling the story from both Escobar’s perspective as well as that of U.S. DEA agent Steve Murphy.

Better Call Saul (AMC)
Fans of Breaking Bad will likely enjoy this somewhat lighter fare from Vince Gilligan. It’s a prequel that spans a number of genres from comedy to family tragedy, focusing on the rise of Jimmy McGill (Bob Odenkirk) as a budding lawyer trying to find his way out of his older brother’s shadow. Similarly, Saul tries to develop its own identity in the shadow of one of the most highly praised shows of the past decade. The result is a perfectly balanced concept, equal parts legal procedural, gritty drama and lighthearted comedy. Carried by Mr. Odenkirk’s phenomenal performance, this is a must watch for fans who just can’t get enough of the ABQ.

Hannibal (NBC)
Hannibal will go down as one of the best shows that never stood a chance due to no fault of its own. Creator Bryan Fuller’s interpretation of Hannibal Lecter and Will Graham was by far the most brutal and gory. After quickly being moved to the dreaded Friday night time slot in its first season, the show was doomed to an early demise. The third and final season was brilliant, tackling the Red Dragon storyline and concluding the fascinating character arcs that had been so carefully developed in a relatively short time. While the writing is good, both Mads Mikkelsen as Dr. Lecter and Hugh Dancy as Mr. Graham are revelatory. The show is not for everyone, particularly the squeamish. Those who enjoy the genre will find this series to die for, with the final season providing the most delicious bite.

Game of Thrones (HBO)
Despite a somewhat down season, this ratings powerhouse fantasy drama showed no signs of slowing down in its 5th season. Based on the acclaimed novels by George R. R. Martin, this fantasy series set in the world of Westeros has developed a rabid fan base, and for good reason. The production value continues to be the best on television, perennially contending for the Best Drama Series Emmy. Season 6 premieres on April 24th.

South Park (Comedy Central)
Sure, this probably seems out of place. But it is not an error. Many of you are probably wondering why a cartoon comedy in its 19th season known for its controversial humor would be on anyone’s top list. The answer is because co-creators Matt Stone and Trey Parker have come out swinging with two seasons of biting social commentary wrapped in an extended serialized shell. Season 18 (early 2015) began the trend of a larger over-arching narrative that hits on truly meta topics. Season 19 was far more concise with a clear target of “politically correct” white males correcting any “non-PC” thing for personal gain rather than true social justice. Throw in timely commentary on gentrification, entitlement, corrupt politicians (*cough* Trump *cough*), and the rise of ubiquitous ads in news media and this show is making a strong argument for its continued creativity and relevance.