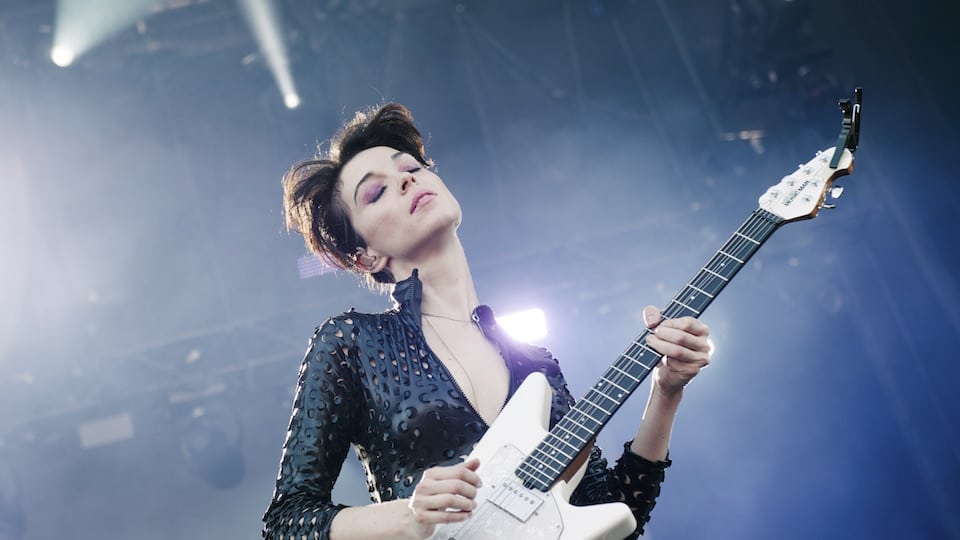 However common it may be to assign a genre to a musician, St. Vincent resists the easy label. As she once told The Guardian: “It sounds like a very Pollyanna-ish thing to say, but my ethos has always been to just make the music that I hear in my head. And I’ve been incredibly lucky, so far, that that’s seemed to correspond to external progress.” To say that’s outside the box doesn’t begin to describe the half of it. Analytical, cerebral, sharp are also adjectives that apply, adjectives that she shares with Talking Heads so else who else but David Byrne would collaborate with her on Love This Giant (2012), his most visceral work in years.

Born in 1982, Anne Clark — the birth name of St. Vincent — is a multi-instrumentalist, raconteur, entertainer, vocalist, and writer whose body of work eclipses her reputation. Consider this: Her voice was employed by the surviving members of Nirvana for their 2014 Rock and Roll Hall of Fame induction. She performed with The Pixies and Beck in 2015. Famed session musicians Matt Johnson (drummer) and Toko Yasuda (guitarist) repeatedly collaborate with her on her studio albums.

Her pseudonym comes from a Nick Cave song; her debut album references an Arrested Development running gag. That first LP, Marry Me, is an astonishing collection of carefully crafted, cryptic songs built around a chamber pop arrangement. Produced by Bowie pianist Mike Garson, Marry Me is a shimmering, startling project that netted her a Grammy for 2014’s “Best Alternative Album.” Although as St.Vincent famously pointed out, an alternative to what?

Prince was a fan, and she shares his sexual and gender fluidity even if her own preferences seem more defined given past liaisons with Kristen Stewart, Cara Delevingne, Carrie Brownstein, and Lissy Trullie. Not that she’s courted attention on that front. To the contrary, St. Vincent has maintained her status as a cult artist by tending to throw the interview’s spotlight onto her songs. “Smoking Section,” from last year’s Masseduction, delves into a universal sense of isolation with lyrics sung in husky tones: “Sometimes I feel like an inland ocean, too big to be a lake, too small to be an attraction.” Sure, she’s got music on the Twilight soundtracks — “Roslyn” with Bon Iver, “The Antidote” on her own — but she’s never been one to run with the pack.
Indeed, her most acclaimed work so far, the eponymous St. Vincent (2014) proved that she didn’t have to sacrifice the abstract in order to find commercial success.

The soulful “Digital Witness” is a tongue in cheek account of interdependent internet addictions while the synth-driven “Birth in Reverse” isn’t afraid to question her own sanity: “You could say that I’m sane / In phenomenal lies.” The Grammys weren’t the only ones to take notice either as NME, The Guardian, musicOMH, Entertainment Weekly, and Slant Magazine all named it the best album of the year.

Despite such achievements, her persona remains a well-cultivated enigma. As former collaborator David Byrne put it in 2013: “Despite having toured with her for almost a year, I don’t think I know her much better, at least not on a personal level … mystery is not a bad thing for a beautiful, talented young woman (or man) to embrace. And she does it without seeming to be standoffish or distant.” For the selfie generation, that’s beyond impressive. That’s one of a kind.