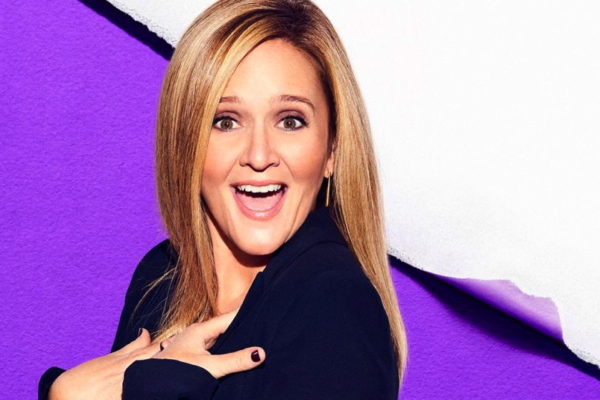 Okay, Samantha, it’s time. You know it. We know it. TBS knows it. You’re having a moment. No one is covering this election with the bite and the balls that you do. This is your chance, but you have to seize that brass ring. You have to go nightly. Do it for us. We are drowning out here. Lost in a sea of email scandals and alt-right talking points. The world is going insane. We need someone to make some sort of sense of it. Or at least make it somewhat entertaining, because we just can’t take this anymore.

This country is coming off the rails, and the only thing that stands between us and gold-plated oblivion is you, Ms. Bee. Your old boss, Jon Stewart, seized the conversation during the 2000 election, and never gave it up. You have a chance to do something similar.

John Oliver is brilliant, but his 60 Minutes style isn’t the rapid response machine that we spent years watching on The Daily Show. Larry Wilmore, and his unique perspective, is sadly off the air. Stephen Colbert, one of the most brilliant satirists of our time, doesn’t have your bite. Seth Meyers is interviewing the cast of Grimm five nights a week. Jimmy Fallon: No comment.

Only you have the chops, the righteous anger, and the point of view to help us make sense of what in the world is going on right now. And it’s a point of view we need. Unapologetically female and unapologetically pissed. No one is going to say your voice is shrill. No one will say that you sound like you’re shouting. You are goddamn right, she’s shouting, people! We all are. Have you turned on a TV lately?

Who else is calling out their own audience for skipping the midterm elections? Who else is actually sitting down with refugees and explaining to them what a bunch of jerks we Americans can be?

You did a segment on a floundering bill mandating that all the rape kits in Georgia finally get tested, and somehow shamed them into actually passing the damn thing. You called out the Orlando shooter (in regards to his mirror selfies, you said “I think we can all agree that if you don’t have one friend to hold the phone for you, your lone wolf ass doesn’t get a gun”) while also tearing down lawmakers like Sen. Marco Rubio and Gov. Rick Scott for offering sympathy, but doing nothing of substance when the time came.

You are kicking ass, Samantha. In this fractured media landscape, not many chances present themselves to become a defining voice. This is that moment. Women have been taking over the comedy world these last few years, but you are the first to get your own late night show and really make something of it. And kudos. But it just isn’t enough. One night a week is fine for 2 Broke Girls, but in this rapid response world of 24 hours news, we need someone to break it down daily. And you are that someone. So, if I haven’t made myself clear, it is time to go nightly.

0 comments on “Why Samantha Bee Needs to Go Nightly”