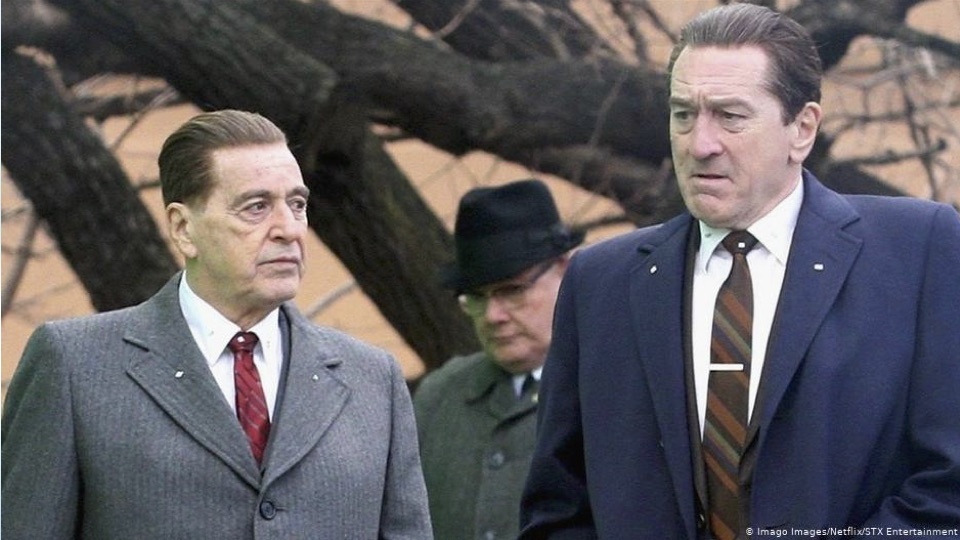 “And so the end is near… ” 2019 provided a potpourri of delicious films, some seen on the big screen, some on a laptop. Netflix alone has opened a new pathway one that Martin Scorsese gladly shared this year. Reuniting himself with premier muse Robert DeNiro, The Irishman is one of three Netflix dramas that have made this list. One’s a mob elegy, one a seventies homage and there’s one that features a resigned pope. Elsewhere, a Star Wars director found his creative muse in Agatha Christie, a MadTV writer his in the Twilight episodes, while Robert Eggers explores the color of the human condition in probing black and white. All of this and a superheroine saving the planet!

The Lighthouse: Two lighthouse keepers battle the elements to keep their demons, ghosts, and selves away. Grainy black and white silhouettes paint the preternatural environment that Robert Pattinson and Willem Dafoe turn to. Darkly disconnected to the comforts that society offers, the keepers find themselves the victims of claustrophobia that they have created in a battle of the soul and mind.

Captain Marvel: Avengers: Endgame, for all its decor and technical aspirations, was a vacuous affair. Less so Captain Marvel, an unashamed feminist apotheosis starring the indomitable Brie Larson. It’s polemic by Marvel standards, but never at the expense of the terrific set-pieces. Samuel L Jackson returns as a younger Nick Fury, boasting the most impressive use of de-aging I have yet seen in a film.

Pain And Glory: Pedro Almodóvar draws on his own life for a colorful impasto of Spanish life. Focusing on Salvador Mollo (Antonio Banderas), the audience witnesses the decline of a film director in the throes of his art. It’s Almodóvar’s bravest work, a devastating journey into the ragged, aged and mediocre. As a Spanish language film, it’s unlikely to be as widely watched as some of the others on this list, but it’s this writer’s favorite of the ten.

The Two Popes: A fictionalized re-telling of one of the more unlikely chapters in the Catholic doctrine, Anthony Hopkins and Jonathan Pryce play two devotional men searching for their relationship to God. Pryce is excellent, his resemblance to the future Pope Francis an uncanny one, but Hopkins is the star player, capturing the twilight years of a Pope more man than saint. A Netflix production, it feels strangely similar to Netflix’s The Crown, both detailing aging institutions reconciling their spiritual leadership in a modern light.

Knives Out: Cannily reinventing the ‘whoddunit’, Rian Johnson took inspiration from the trolls who spat his way after releasing the ruminative The Last Jedi. Unlike Kenneth Branagh’s more reverent Murder On The Orient Express, Knives Out is very much a film of the present, references to Hamilton, iPhones and red caps caught between forensic conversations. Knowingly aware, the film opens on the murder of mystery writer Harlan Thrombey (Christopher Plummer), continuing with an ensemble cast that could rival a spectacular Bond. Among these cast members stands Daniel Craig, playing the volitional Benoit Blanc, who looks like he’s having more fun here than he ever did as James Bond. Inspired!

US: Jordan Peele’s Get Out was a strong, superior debut, but this is a bona fide horror masterpiece. A much more confidently directed effort, Peele leads us through a cascade of mirror imagery, razor-sharp demarcations held between a lowly American family and their maniacal doppelgangers. Lupita Nyong’O leads the idiosyncratic feature, bringing wistful gravitas to the unhinged proceedings.

Little Women: Writer-director Greta Gerwig (Lady Bird) revisits the seminal Louisa May Alcott with fresh eyes, adopting a non-linear method to explore the story read by millions. It’s one of many inspired turns this adaptation takes, showcasing the depth, breadth and organic nuances Saoirse Ronan can demonstrate. And if there’s anyone who still doubts Timothee Chalamet’s commitment to his craft, you have another pleasant surprise in store.

Marriage Story: There’s an interesting dichotomy to Noah Baumbach’s thirteenth feature. Channeling his divorce to Jennifer Jason Leigh into the script, Baumbach captures the betrayal and betrothal marital breakdown provides. The film offers career-best performances from Scarlett Johannson and Laura Dern, two Hollywood franchise players proving they have a lot more to their wheelhouse. Leigh herself enjoyed the film, Baumbach admitting to People “I showed her the script and then I showed her the movie a little bit ago. She likes it a lot.”

The Irishman: Reuniting Robert De Niro with Joe Pesci, this feels like the closing chapter in a mob trilogy that started with Goodfellas and Casino. Elegaic, piercing and probing, only the darkened stares of wives and daughters remind the leads of their harrowed paths. And then there’s Al Pacino, the film’s wildcard, working his hands, eyes, and veneer through the Teamsters Union. Positioning himself as the lofty Jimmy Hoffa, Pacino punches his hands with steady confidence, tackling both the American government and Mafia with sharpened eyes, falling only to the hands of his greatest enemy; himself.