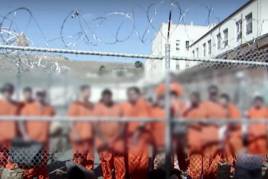 When thousands marched across the Edmund Pettus Bridge in Selma last year to commemorate a similar act by black activists fighting for the right to vote 50 years ago, few probably realized that 30 percent of black men in Alabama still don’t have that very right. It’s been permanently taken away. As Michelle Alexander, author of The New Jim Crow, explains in the recently released Ava DuVernay doc 13th, “Mass incarceration strips millions of poor people, overwhelmingly people of color, of the very rights supposedly won in the Civil Rights Movement…It seems that in America, we haven’t so much ended racial caste, but simply redesigned it.”

Throughout her stirring Netflix documentary, DuVernay carefully walks us through this redesign, interviewing professors (Henry Louis Gates, Kevin Gannon), authors (David Keene, James Kilgore), and activists (Angela Davis, Cory Greene) on everything from Jim Crow laws, which legalized racial segregation, to the current state of affairs in which one in three black American men are behind bars. How did this come about? As DuVernay points out, the post-abolition South found its new source of cheap labor in black inmates imprisoned for petty crimes. Then throughout the 20th century, a white political elite justified this approach by crafting an image of black men as violent criminals. Consider the landmark film Birth of a Nation (1915) in which black men are depicted as predatory animals at best. That movie triggered a surge in popularity of the Ku Klux Klan and lynchings became so widespread that African-Americans fled north to cities like New York, Boston, Chicago, and Los Angeles, in what is now called the “Great Migration.”

Cut to the Civil Rights Movement of the 1960s. DuVernay recaps how black activists are also portrayed as criminals, with FBI agents infiltrating Malcolm X’s entourage, police executing Black Panthers Fred Hampton, and presidential administrations perpetuating the notion that blacks should be feared. Through some chilling footage, DuVernay reveals how Richard Nixon’s “War on Drugs” was admittedly an attack on black communities, how Ronald Reagan’s campaign confessed to racist policy, and how Bill Clinton’s signing the 1994 Crime Bill proved to be one of the most historically damaging legislation for African-American communities. Her footage equating violence at Donald Trump’s rallies with racist attacks from the past is particularly damning.

Shockingly, the prison population since 1970 has risen from half a million to over 2.3 million. More than 40 percent of that population is black. This means we currently have more African Americans under criminal supervision — incarcerated or on parole — than enslaved in the 1850s. “We just tried to move on after the Civil Rights Act was passed,” Founder of the Equal Justice Initiative Bryan Stevenson says in 13th. “Because we never dealt with it, that narrative of racial difference continued, and it turned into a presumption of dangerousness and guilt that follows every black and brown person.”

According to DuVernay, this centuries-old presumption of dangerousness is what leads to so many wrongful killings of black Americans by police officers. “We may have lost the sheets of the Ku Klux Klan,” Congressman Charles Rangel says in 13th, “but clearly when you see black kids being shot down, then, obviously, we didn’t cut out this cancer.”

What is new is the technology with which we currently expose it, like when Philando Castile’s girlfriend broadcast his murder live on Facebook earlier this year. It is, as The New Yorker’s Jelani Cobb puts it, “the medium of technology that will confirm your experience such that your basic humanity can be recognized.”  What becomes clear throughout 13th is that the Black Lives Matter movement isn’t about exclusion. As activist Malkia Cyril explains it: “When black lives matter, everybody’s life matters, including every single person that enters this criminal justice system.” She adds, “It’s about changing the way this country understands human dignity.”

0 comments on “Jail Time: Ava DuVernay’s “13th” on the Evolution of Racism”