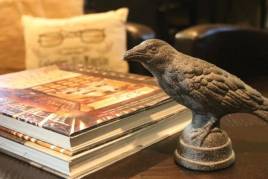 It may seem off-center for a home-keeping blog to blip on CultureSonar’s sonar, but think about it: There are as many definitions of “home” as there are people living. We discovered that there is more to Urban Home Blog than recipes and crafty projects, though there are plenty of those too. We recently spoke with UHB’s creator and writer Eric Diesel about writing for community and instruction, about collecting haunted houses and correctly mixing a martini, and about whether houseplants are members of the household. (We learned to our surprise, they are.)

Q: How and when did Urban Home Blog come about?

A: It was July, 2009. I had been writing since high school about any number of topics, chiefly the arts and other feature-focused areas. I was covering theater, film, nightlife, and GLBT for online shelter sites such as Time Out and Citysearch and had worked in print since long before that, for example as a film reviewer for a newspaper. But some of my earliest publications were food pieces, such as writing about celebrity cooking (not celebrity chefs as this was before that phenomenon became commonplace; I wrote about famous cooks such as Vincent Price), American comfort food, and cooking history and techniques. I had recently begun writing about food for Slashfood. Coincident with all of that, I had settled into a home, and was increasingly interested in that kind of content. I wouldn’t say having my own home awakened my love of home-keeping so much as reawakened it. I saw potential in a home-keeping site, offered as a blog due to the capacities of that format but archived as areas of usable content, focused on home-keeping overall but reflective of my experience making a home in a city, first in New York City, now in Los Angeles. I thought I could contribute something that readers could enjoy and use, for which there was an audience that not many other writers were addressing in this way, in a subject area about which I was qualified to teach. So I started Urban Home Blog.

A: In New York City, along with a dear, dear friend and true influence in my life, annually we hosted a group Thanksgiving for friends, friends of friends, neighbors, and anyone else who wanted someplace to go that day for food, company, and gratitude. Those Thanksgivings were the best day of the year for over a decade. It took me a while, but after her death, I finally was able to write about Thanksgiving as a tribute to her, and to share her recipe for greens. That is by far the most popular content on the website — it has reached more people than I ever thought I would as a writer, and from my point of view that is a memorial to her. Beyond that, popular content includes a piece I wrote about making your own home no matter how much of an outsider you’ve been, which came from my collecting haunted houses and witches. Straight-up informative home-keeping content is always popular, such as a two-part column about home electronics. And of course recipes are popular — the top three are a recipe I wrote for a simple pasta with lemon and capers, my thoughts about and recipe for mixing a gin gimlet, and — this delights me — the recipe for making nectar to feed hummingbirds.

A: Any of the above would be a great starting point, but as there are areas of content at UHB the answer would depend on what a reader is interested in. For cooking, any of the entries in Weeknight Dinner are designed to be entertaining to read but simple enough to execute either during work week stress or, even better, during the gift of a break in that. For home-keeping, I wrote a series of columns on stocking and maintaining the pantry that is comprehensive and detailed enough to be home-keeping nerd heaven, and a piece about mold and mildew that’s so gross and researched that I occasionally reread it myself. For holidays and entertaining, I would suggest the Haunted History of Halloween or the downloadable Guide to Cocktail Parties. Speaking of parties, I love to write about cocktails and wine under the tag Urban Bar; for that, I’d start with any of the cocktail stories/recipes such as Blood and Sand or Old Hickory, or a recent column about gay bars.

A: I’ve just redesigned UHB so that will be of interest as I learn how to maximize the new design for readers’ benefit. The pieces are easier to see up front, which gives both a nice overview of the content a reader can delve into but also makes the delving easier by streamlining the archives and using the tags as entrances to that collected content. Regarding content, autumn and winter holidays are always a watershed for lifestyle writing. The final quarter of the year starts with Labor Day and Back-to-School and proceeds through the Jewish High Holidays, the Autumn Equinox, Halloween, All Saints and All Souls, Election Day, Thanksgiving, Yule, Christmas, Hanukkah, New Year’s, birthdays and anniversaries and anything I’m not remembering to mention. I always do a spooky Halloween post and I’ve organized a good Thanksgiving month not just of recipes and sentiment (though those are important) but some fun as well. And speaking of organizing, January is going to be all about that.

A: I get a lot of nice responses, not so many funny or weird ones. Readers are very supportive about any piece I write about finding and making your own home, such as the Haunted Houses and Witches piece. They love seasonal writing especially if that ties to holidays or local color, such as the history of Harvest Home. I love it when people correspond with me about trying a recipe or project and share how it turned out. I heard from one reader in The Netherlands who turned my simple recipe for peanut butter cookies into the group activity for her daughter’s birthday party, and sent me pictures. It was touching, and I still have the email and the pictures.

PS. For more on cooking, cocktails, and organization, check out our posts Whiskey For Breakfast and Other Historical Diet Tips, Extra Crispy: The Champions of Breakfast, An English Major Walks Into a Bar…, and Bang! Bang! Bang! It’s Time to Take a Shot at a Bullet Journal.

0 comments on “Urban Home Blog Has Helpful Advice on Halloween, Houseplants and Hummingbirds”