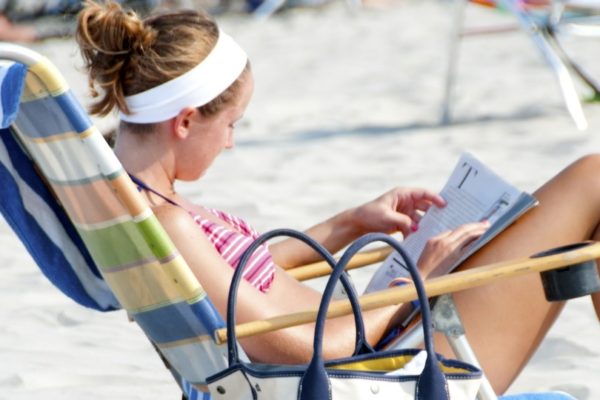 Spangled with ruffled pages, oily with sunscreen, and meant to be stuffed into a string bag, “beach reads” may be viewed as toss-away books, but that’s not always the case. Sure they’re breezy guilty pleasures or tan-inducing page-turners, but we endorse this form of reading! So for those among us who plan to spend part of the dwindling summer days on a beach, absorbing ourselves in more edifying or otherwise involving literature, here is a short list of reliable paperbacks to enhance your sand time. Since they’re all from the 1980s, we’re guessing a used copy is now available on Amazon. Go ahead. Revel in the vintage detail.

1. John Huston’s An Open Book (1980)
Director, screenwriter, actor, hunter, and bon vivant John Huston’s autobiography is not quite the open book of the title, but it is one of the most elegantly written celebrity memoirs ever. From his astonishing Hollywood provenance, extensive womanizing, prodigious drinking, love of Ireland, and obsession with hunting for sport, Huston was a formidable man and an unapologetically flawed soul. You may not emerge loving the man Paul Newman called “The Eccentric’s Eccentric,” but you would be hard-pressed to forget the scope of his life. (His anecdote about a horrifying bout of gastro-intestinal distress at a girlfriend’s house is side-splitting funny.)

2. Rona Jaffe’s Mazes and Monsters (1981)
Rona Jaffe’s stellar writing career lasted for decades, just dipping into her own mid-century college experiences and wrenching them to life through flawed, vibrant fictional characters. This tale enters the teen realm of “Dungeons & Dragons” (in an altered titular form), showing its deleterious effects on a warm group of friends who bond over the game while one of them steps over the precipice from fantasy to insanity. Focused on the pains of growing up and adapting to a troublesome world, this novel goes down easy. Afterwards, pop in the videotape of the enjoyably cheesy TV movie starring Tom Hanks if you’ve held on to such accoutrements.[amazon template=right aligned image&asin=0156028352]

3. Alice Walker’s The Color Purple (1982)
This epistolary novel of enormous power and import evolves into a series of letters to God written by Celie, a young southern black woman who has been raped and impregnated by her father, abused by her husband, and given minimal resources for coping in an exceptionally cruel world. But make no mistake. The Color Purple is an absorbing read that plays up the indomitability of the human spirit. Celie becomes intimate with her husband’s mistress and triumphs unforgettably. The book became an Academy Award-nominated blockbuster a few years later; both versions are extraordinary.

4. Norma Klein’s Lovers (1984)
Norma Klein was an admired author through the 1970s and 1980s, whose “teen angst” books were lauded for their firm sense of New York City, disquieting honesty, and quirky humanity. Less well-known is that she wrote adult books as well, and this one is a juicy tale of two suburban marriages awkwardly linked by an affair of many years’ duration. Marilyn, an attractive blonde wife and mom, falls dangerously in love with nebbish-y neighbor Benjy, who is also married, decades of sneaking and lying ensue — hashed out by all the salient characters in first-person chapters. Klein had a way of seeing flaws with excruciating clarity without dehumanizing her people. This book is a readable delight, a legitimate tale of love, loss, and healing.

5. Mario Puzo’s The Sicilian (1984)
The literary follow-up to Puzo’s The Godfather, The Sicilian opens with its predecessor’s questionable hero Michael Corleone wrapping up his Sicilian hide-out in 1950 and tasked with bringing real-life Robin Hood-esque hero/bandit Turi Guiliano back to America. This is a tour de force of historical fiction enhanced by gritty writing and a fascinating authentic account of Mafia intrigue. Sure, it’s a dense read but you’ll be surprised by how fast it goes as it provides you with a great escape as you vacation your own more modest escape for workday realities.

6. Erich Segal’s The Class (1985)
Erich Segal earned all the pop cred he would ever need via his 1970 Love Story, a thin volume about doomed love between a rich Harvard upstart and his earthy scholarship girl. In his sixth novel of much grander scope, he revisits his Harvard days, specifically the decades of change, tragedy and heroism experienced by the “Class of ‘58” as they convene for their 1983 reunion. Segal had an engaging way of spinning a yarn, an approach heavy on the intimate detail and inner thoughts of his well-realized players and he left his mark on popular fiction through his unapologetic, unabashed love of the humble Everyman. This book has its moments of goofiness, but we have the prurient pleasure of peeking into the private lives of some very compelling folks.

7. Anne Tyler’s Breathing Lessons (1988)
Tyler has made a Pulitzer Prize-winning habit of writing about the gentle idiosyncrasies of her native Baltimore inhabitants. This sweetly wrenching novel takes place over the course of one day, as a married couple make their way to the funeral of a friend. The heroine is mom/wife/perennial nosy-body Maggie Moran, a middle-aged lady with an embittered grown son, a taciturn husband and an often mortifying desire to fix everyone’s lives. Tyler’s faith in humanity always shines through and yields a loving portrait of silly, scattered Maggie. Breathing Lessons is ultimately an homage to marriage. We grow to care about the relatable characters who will bring tears, laughter, and — frankly — rolled eyes. One of Tyler’s best.

[amazon template=right aligned image&asin=0143038095]8. Amy Tan’s The Joy Luck Club (1989)
This rightfully revered bestseller is a loving look at divided generations, differing cultures, and shared womanhood. A cleverly laid-out saga of 16 stories, the book relates the lives of a handful of mothers and daughters as they gather to chat, cook, and play mahjong over many decades. Colliding cultures and values surface as these women betray and influence one another in familiar familial ways. This is the book that made Amy Tan a household name and you can see why as anyone who reads will emerge stunned and refreshed by the commonality of our humanity. Why shouldn’t your beach reading have an impact that lasts past Memorial Day?