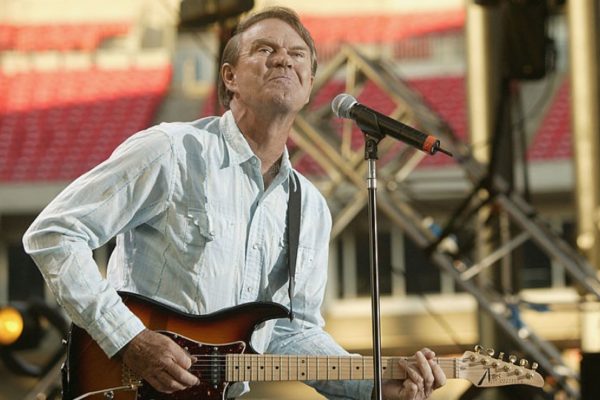 When Glen Campbell left us after a long struggle with Alzheimer’s disease (a battle poignantly captured in the 2014 documentary I’ll Be Me), the world mourned the loss of the man whose visionary crossover of country and pop in the ’60s and ’70s — with help from songwriting superheroes like Jimmy Webb and John Hartford — led to timeless hits like “By the Time I Get to Phoenix,” “Galveston,” and “Gentle on My Mind.” But before he became a star in his own right (and even for a while after), Campbell spent a chunk of the ’60s as a first-call session guitarist (and sometimes bassist). Frequently assessed as the crème de la crème, he was a fixture in the legendary Wrecking Crew crop of L.A. studio hotshots who played on countless high-profile records. The tunes tallied below barely begin to scratch the surface of Campbell’s voluminous discography as a session man.

The Beach Boys’ “Fun, Fun, Fun”
Campbell had quite a history with The Beach Boys. Not only did he play on early hits like “Fun, Fun, Fun” and “I Get Around,” he was also part of the legendary Pet Sounds sessions. And from 1964-65 he was a touring member of the band, filling in for Brian Wilson, whose anxiety had begun to prevent him from performing in public.

Merle Haggard’s “Mama Tried”
Not all Campbell’s biggest sessions came before his solo success. He cut this country classic with the baron of Bakersfield at Hollywood’s iconic Capitol studios, contributing both guitar and harmony vocals, and cementing his place in country music history even further than his own hits had already begun to do.

Gloria Jones’ “Tainted Love”
The world at large knows this song best as an early ’80s synth-pop smash for Soft Cell, but the original version was cut by soul siren Gloria Jones (who eventually became the girlfriend and baby mama of Marc Bolan of T. Rex fame) in 1964. And guess who the guitar man on that seminal session was…

The Monkees’ “I’m a Believer”
Campbell cut a number of tunes with The Monkees, including this 1966 hit, which had already been cut by its author, Neil Diamond, to little acclaim, but became a part of history when The Monkees got their paws on it. Campbell once joked in an interview that “the only reason ‘I’m a Believer’ was a hit is because I played on it.”

The Righteous Brothers’ “You’ve Lost That Lovin’ Feelin'”
Bill Medley and Bobby Hatfield’s 1964 milestone is widely considered to be one of the ultimate exemplars of the famed “wall of sound” production approach employed by Phil Spector, who co-wrote the song with Barry Mann and Cynthia Weill. Campbell is one of a number of guitarists strumming away, contributing to that transcendent musical morass that was Spector’s signature style.

Sagittarius’ “My World Fell Down”
This 1966 single featuring Campbell on lead vocal was only a minor hit, but it occupies an exalted place in musical history. Sagittarius was a studio project put together by Beach Boys producer Gary Usher and The Association’s producer Curt Boettcher, with involvement from auxiliary Beach Boys Campbell and Bruce Johnston and another Beach Boys producer, Terry Melcher. Their work was essentially an extension of what Brian and the boys were doing on Pet Sounds, and as such, earned an exalted spot in the hearts of ’60s pop mavens forevermore, especially after its inclusion in the influential anthology Nuggets.

PS. For more on the Wrecking Crew, check out our post These Guys Were REALLY Behind the Music. Plus, we remember Chuck Berry and Leonard Cohen, who also left us in the last year.