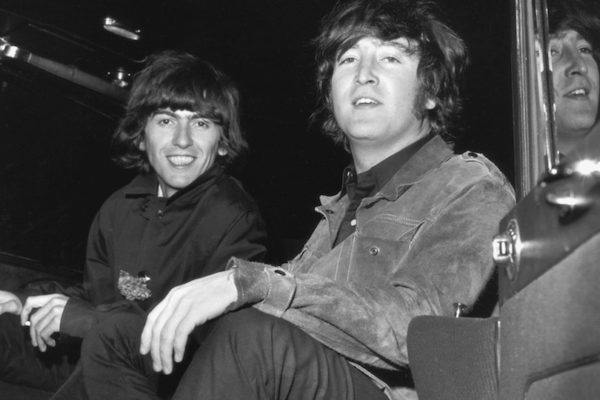 In 1961, merely ten years after Leo Fender introduced the world’s first successfully manufactured bass guitar (the Fender Precision Bass), another seismic event occurred in bass guitar history when Stu Sutcliffe relinquished the bass chair in The Beatles to Paul McCartney. Macca’s unique musical artistry on the 4-string is well-documented; his bold, melodic lines on Beatles classics such as “Something,” “Paperback Writer” and “Hey Bulldog” helped establish the vocabulary of the bass guitar in pop music, and to this day Paul McCartney is widely regarded as one of the most influential bassists of the 20th century. But in keeping with The Beatles’ spirit of experimentation, it’s worth noting that there are a handful of tracks on which Macca handed off the low-end chores to his bandmates.

See Related Post: “The 10 Best Paul McCartney Songs You May Have Never Heard”

“Maxwell’s Silver Hammer” (George Harrison)
Paul’s bandmates might have been openly critical of this music hall-inspired tune (and the endless retakes he demanded while committing it to tape), but it’s George Harrison’s unique musicianship that elevates the track to Beatles-level greatness. In addition to his distinctive guitar leads, George lays down a bouncy bass line on a Fender Bass VI (an early 6-string bass guitar, tuned an octave below standard guitar tuning). It’s a bass line that is both ear-catchingly melodic and supportive, showing that George learned a thing or two from Macca.

“Helter Skelter” (John Lennon)
Pete Townshend bragged about The Who’s “I Can See For Miles” being the loudest, raunchiest single ever recorded. But he didn’t expect The Beatles to beat him at his own game, let alone invent heavy metal in the process! This incendiary track from The White Album is driven by a raw, sloppy, uncompromising bass performance by John Lennon positively attacking a Fender Jazz Bass nearly a decade before the advent of punk.

“She Said She Said” (George Harrison)
John Lennon’s psychedelic rock classic from Revolver recounts an LSD-fueled conversation with actor Peter Fonda. The song was recorded in roughly nine hours, during a speedy Lennon-directed session on which Paul wasn’t even present! Existing documentation points in the direction of George putting down the simple but effective bass line on a UK-manufactured Burns Nu-Sonic bass guitar.

“Two Of Us” (George Harrison)
This Everly Brothers-inspired ballad from Let It Be gets its unique character from a “bass line” that’s not played on a bass at all: George plays a strident, low-register counter melody on a Telecaster. The line is a perfect example of Harrison’s gift for developing parts that would become crucial hooks to the song. Played on a bass, this line would have been overbearing; moving it to the guitar was a genius move!

“Dig It” (John Lennon)
Though less than a minute of this song appeared on the Let It Be album, it evolved from a lengthy studio jam dominated by Lennon’s free-associating wordplay and enthusiastic Fender Bass VI strumming. Though the low-register chords would have sounded muddy in lesser hands, Lennon somehow makes it work and reminds us why he’s one of rock’s finest rhythm guitarists.

Photo by Harry Thompson/Evening Standard for Getty Images
While we’re at it, please download our free eBook, “There’s Nothing Left to Say About The Beatles: Vol 1.” It’s our gift to you.