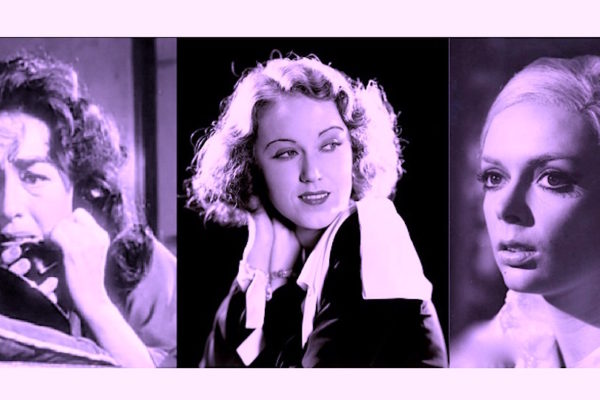 There are many sub-genres of horror film: the monster movie, the vampire tale, the slasher flick, the serial killer thriller, and the Attack of the Giant (Fill in the Blank). Yet whether it’s a werewolf on the prowl or ghosts on the loose, the Scream Queen reigns supreme. Many an anonymous ingenue has filled that role, but some of the women of horror film have become legend — and it’s a legend that stretches back into the black-and-white era. Let’s take a look at the women who helped create the horror genre–whether as victim or villain, final girl or first-to-die, they all added their own feminine touch. (We’re assuming you know all the scream queens from the 1980s onward.)

1930s
If there is an original “gangsta” for scream queens, that would have to be Fay Wray. The actress’s 57-year career began in silents and ended in made-for-TV movies, but she remains best known as the beauty carried off by the beast in the original King Kong. There’s even a postmodern moment when Wray’s aspiring actress is coached on how to emote by her director: ”Cross your arms over your eyes and scream for your life!” Wray also shrieked it up in the original Mystery of the Wax Museum, as well as The Vampire Bat and Doctor X.

1940s
The first woman to be called ”Queen of the Bs,” Evelyn Ankers starred alongside many of the great horror stars: Bela Lugosi, Lon Chaney, Claude Rains, and John Carradine. Her best-known role is as the antique-owning heroine in The Wolf Man, whose ladylike persona balances out her suitor’s wild side. Ankers also added a touch of class to second-class sequels like The Ghost of Frankenstein, Son of Dracula, and The Invisible Man’s Revenge.

Elizabeth Russell swanned through many of horror maestro Val Lewton’s films, coming off like an icier Marlene Dietrich — which is saying something when you consider the chilliness of the latter. Her Lewton roles tend to be powerful, wicked cameos, like the enigmatic “cat woman” in Cat People, a suicidal neighbor in The Seventh Victim, and Boris Karloff’s nasty niece in Bedlam. She also appears in The Corpse Vanishes as the vain, aging wife who drives Lugosi to body-snatching.

1950s
If your aim is to be a horror film legend, having “Hammer Films” and “Roger Corman” on your resume’ will certainly get you there.  Hazel Court had all of that —  and Devil Girl From Mars too. The buxom redhead headlines alongside Peter Cushing and Christopher Lee as the evil doctor’s naive fiancee’ in The Curse of Frankenstein. For Corman, she was a sassy, snarky “Lenore” in his horror-fantasy-comedy, The Raven.  Perhaps her best role is the jealous, decadent mistress of Vincent Price’s “Prince Prospero” in Masque of the Red Death; her surreal death scene is indeed a screamer.

Creepily, two 1950s scream queens had their biggest horrors in real life. Susan Cabot, best-known for The Wasp Woman, suffered from mental illness and drug addiction before her son killed her (supposedly in self-defense). Then there was Yvette Vickers, star of Attack of the 50 Foot Woman and Attack of the Giant Leeches. Vickers became a paranoid recluse whose mummified remains were found in her Beverly Hills home in 2011, almost a year after her actual death.

1960s
Barbara Steele’s sharp bone structure, enormous dark eyes, and eccentric presence won her a starring role in Mario Bava’s horror classic Black Sunday, launching a career as a premier scream queen. But Steele was more than that — she squeezed in a significant role in Federico Fellini’s masterpiece 8 ½, between flicks like Corman’s The Pit and the Pendulum and the Italian horror show Castle of Blood.

The ’60s also marked the emergence (some might say descent) of Hollywood legend Joan Crawford into the horror genre. In Whatever Happened to Baby Jane?, she plays the ultimate victim. (The scene of her shrieking in the spinning wheelchair is indelible.) Crawford followed it up with a turn as a reformed (?) murderess in William Castle’s Strait-Jacket and as the ringleader of a circus with a serial killer on the loose in Berserk.

1970s
Along with the scream queen, another horror trope is the “final girl”–the one who makes it out alive. It’s a role Jamie Lee Curtis played in a number of films beginning with Halloween, where she was the badass babysitter who defeated “Michael Myers.” Then she was a survivor in strapless pink taffeta in Prom Night. (Plus, her mom Janet Leigh gave one of the most memorable scream-queen performances in 1960s’  Psycho.)

A more arthouse-oriented scream queen was Jessica Harper, who didn’t appear in many horror films.  The two she did are unforgettable: a naive singer pursued by a showboating rock star and the reclusive “Phantom” in Phantom of the Paradise. and the young ballerina who discovers something sinister about her dance school in Dario Argento’s visually stunning Suspiria.

PS. There are some other scary things lurking in everyday life….plus, read about one of the most talked-about modern-day horror movies.

0 comments on “5 Decades of Scream Queens: A Chronology”