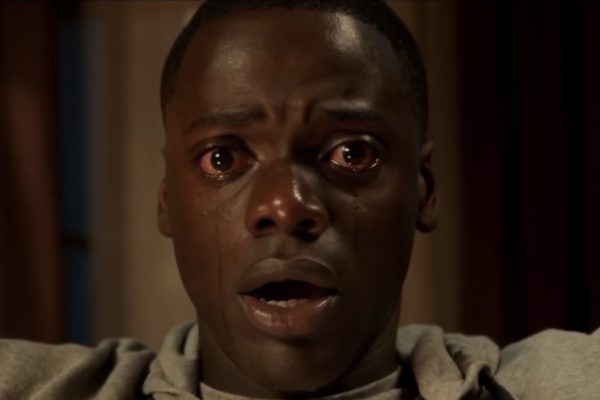 Be forewarned: Get Out will leave you with goosebumps that stay on your skin as you head to your car long after the final credits finish rolling. This is a movie that makes you look twice at every passerby, with an eerie feeling that you haven’t quite escaped the very scary world that writer-director Jordan Peele has brought to life so vividly. It’s like suddenly you’re an unwelcome guest in your own reality. I suppose to some degree, this is also how the main character Chris (Daniel Kaluuya), a lovestruck young black man, feels when his white girlfriend Rose Armitage (Allison Williams) takes him home to meet her parents, Missy (Catherine Keener) and Dean (Bradley Whitford), an affluent white couple who live on a remote estate with their two black housekeepers.

“I know how it looks,” Dean says self-deprecatingly as he takes Chris on a tour of the sprawling property. “A white family with black servants.” But then he explains that the “servants” — Georgina (Betty Gabriel) and Walter (Marcus Henderson) — were hired to take care of his parents. When the old folks died, the Armitages simply couldn’t let the help go. “But, boy, do I hate the way it looks,” Dean says. This is a family concerned with appearances. They’re comfortable that racism exists, so long as they’re not associated with it. Sound familiar?

[amazon template=right aligned image&asin=B01D1J58C6]Peele began writing Get Out after Barack Obama won the presidency in 2008, when many white Americans thought we were suddenly living in a “post racial” world. Seemingly “progressive” people began to ignore the plight of minorities because we had a black man holding the highest office as if our newly elected leader could somehow play the role of America’s Token Black Friend. Reality has proven otherwise, illustrated here in the movie early on: When Rose and Chris hit a deer on their way to her parents’ house, the cop who comes to help asks Chris for his ID, despite the fact that he’s not driving. The awkwardness only escalates when Rose’s dad calls Chris “my man” and her brother tries to put the guest in a headlock at the dinner table.

The white characters in Get Out are bothered by racism in the most superficial way imaginable. In the words of one character, racism simply “bums them out.” But they aren’t so bothered that they’d actually do something. It’s a discomforting phenomenon from which they’d like to distance themselves — mentally and emotionally. They hate the way racism looks and feels, but they’re happy to silently reap its benefits. And then things get worse.

During his first night in the house, Chris is hypnotized by Missy, a psychologist. He wakes up in his bed with a jolt the next morning, assuming what preceded — an evening of taunted paralysis — was all a dream. Because if it’s not a dream, what’s going on here? (SPOILERS AHEAD) Each time Chris attempts to connect with black locals, he notices something is off. Walter, the groundskeeper, has a strained smile and voice as does party guest Andrew Logan King (Lakeith Stanfield). The conversation doesn’t flow easily either. When white folks talk to him it’s all about Barack and Tiger Woods. One woman feels his biceps. A man quips “black is in fashion.” Once Chris snaps a photo of Andrew, the resultant rage and nosebleed is the least of anyone’s worries.

You see, there’s a crazy science experiment at work here that has to do with the fetishization of blackness as representing people who are “stronger, faster, cooler,” or as Ashley Weatherford wrote for The Cut, “It’s Peele’s way to undermine the belief that marveling at black bodies somehow counts as valuing black life.” In the very beginning of Get Out, Dean tells Chris, “It’s such a privilege to experience someone else’s culture.” Peele takes that very thought and stands it on its head!

PS. If horror is your genre, we’ve got a website for you. Check out our post on Shudder here. You may also enjoy a look back at an old, creepy classic in our post An Underappreciated Nightmare.

0 comments on “Funny, Scary and Smart: “Get Out” Works on Several Levels”