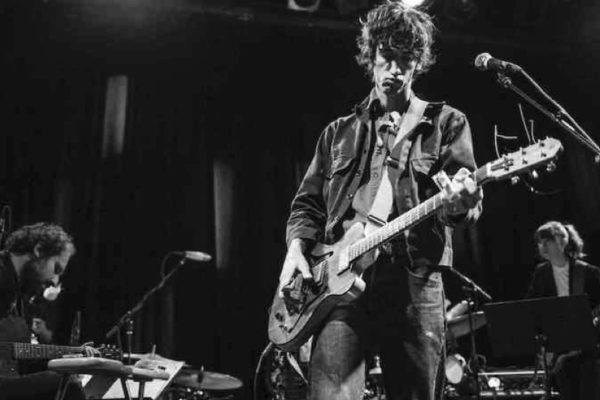 Hard to believe that nearly a year has passed since we lost Leonard Cohen, but one great way to remember him is now available via the celebratory album Sincerely, L. Cohen. It’s culled from a tribute concert that was held in honor of the late, great singer-songwriter earlier this year at the Music Hall of Williamsburg. With artists like Amy Helm, Josh Ritter, and Richard Thompson all lending their voices, this record brims over with talent. We checked in with Jesse Lauter, one of the producers, to share some thoughts on the concert, the covers, and all things Cohen – memorial and otherwise.

Q: Delicate Steve’s largely instrumental version of “Hallelujah” allows you to hear it fresh again after so many other covers. How did this rendition come about?

A: Any true songwriter will tell you that a great melody is what makes a song. Obviously Leonard Cohen was one of the greatest lyricists of our time, but he was a brilliant melody-maker as well, and “Hallelujah” is a perfect example. If you read the “Hallelujah” lyrics, they are remarkable but slightly perverse. And still, the song is sung in houses-of-worship around the world and even found its way onto the Shrek soundtrack. So much of that has to do with the melody and the hook (which mind you, is centered around one of the most famous words in the human language). So I thought an instrumental version of the song would be a nice way to kick off the show — strip Leonard’s most famous song of its words and showcase it for its beautiful melody. It’s something I had experimented with previously on an album I produced called Bob Dylan in the 80s, with Marco Benevento‘s instrumental cover of “Every Grain of Sand.” Steve [Marion] is one of the best instrumentalists I know, so it worked out perfectly that he was available and into the idea. It was like our overture, and a way to let the audience know this was not going to be your typical tribute concert.

Q: The album wasn’t able to include all the performances from the concert (which lasted about three hours). If you could add one more song to the LP, what would it be?

A: I wish we could’ve included all of them! We had amazing performances from Arc Iris (“Lover, Lover, Lover”), Adam Weiner from Low Cut Connie (“Everybody Knows”), Steve Salett (“First We Take Manhattan”). Will Sheff nailed the overly-complicated “Take This Waltz,” Teddy Thompson had a groovy take on “Tower of Song,” and Lenny Kaye, aside from reading from Leonard’s novel Beautiful Losers, did a raucous version of “Don’t Go Home With Your Hard On.” We all just know there’s a limited amount of space to work with when making a record. But we have those other tracks mixed, so hopefully we’ll get around to releasing them at some point.

Q: Was there a particular cover that pushed Cohen’s music in a totally unexpected direction for you?

A: I thought what Holly Miranda, Joan Wasser (aka Joan As Police Woman), and Jared Samuel (a.k.a. Invisible Familiars) did with “I’m Your Man” was very unique. It was the three of them playing to a pre-recorded “beat,” Josh Kaufman (our very talented music director) on lap steel, and Stuart Bogie on Jews Harp. And Osei Essed’s version of “Diamonds in the Mine” brought a sort of energy you don’t typically hear with Leonard’s music.

Q: Just to turn it around, are there any covers that Cohen performed that you’re particularly fond of?

A: I once saw him perform “Save the Last Dance for Me” by The Drifters. That song was actually the last song he ever performed live, so when our show ended, we played the original as the exit music. He also did a great cover of “To Love Somebody” by The Bee Gees.

Q: Money from the sales of the album is benefiting the Preemptive Love Coalition. What made you choose this particular charity?

A: Hannah Gold [co-producer on the concert] had done some work with them previously. When she showed me their site, I was taken with the sort of work they are doing in the Middle East. They are literally on the front lines saving people’s lives in areas affected by terror, especially children. Knowing how much Leonard cared about Middle East peace, it seemed like the type of organization that he would get behind. We raised a substantial amount for them from the concert and hopefully we will raise even more from album sales. So make sure to get the vinyl!

You can purchase Sincerely, L. Cohen at RPF, Amazon and iTunes or stream it at Spotify, AppleMusic and GooglePlay.