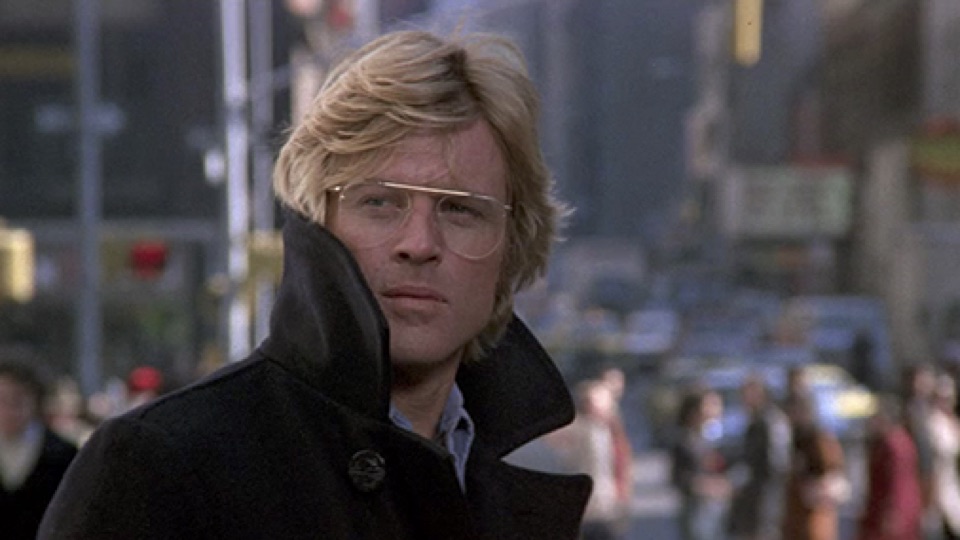 The late 1960s and early to mid-1970s were a time of significant change for our country. The optimism and positive vibes of the 1960s gave way to cynicism and distrust regarding our government. In the wake of the assassinations of John F. Kennedy, Robert Kennedy and Martin Luther King, Jr., the Manson killings, misleading “official” information regarding the Vietnam War, and ultimately, the Watergate scandal, it was hard to know who to trust. Filmmakers Alan J. Pakula and Francis Ford Coppola began to examine these themes in their onscreen work. Directors John Frankenheimer and Costa Gavras had previously explored these ideas in films such as The Manchurian Candidate and Z, but the 1970s saw the conspiracy thriller come into its own. Here are five prime examples of the genre:

The Parallax View (1974) – If you’re seeking a nihilistic view of the government, look no further than director Alan J. Pakula’s tense thriller, which stars Warren Beatty as reporter Joe Frady, who’s always looking for the next big story. When a colleague present at the assassination of a political candidate comes to him with stories of the inter-connected deaths of several witnesses to the event, he initially scoffs. When she dies suddenly (and it’s ruled a suicide) it inspires Frady to look into her claims. This leads him to the Parallax Corporation, a mysterious organization that appears to be recruiting disenfranchised and disgruntled people as assassins. Frady finds out much more than he bargained for when he goes undercover in the group. Pakula’s assured direction, the striking cinematography by Gordon Willis, and Beatty’s fine performance combine to make this ultimately chilling (and still relevant) film worth multiple viewings.

The Conversation (1974) – Harry Caul (Gene Hackman) is a surveillance expert. While he records the conversations of others for a living, he’s phobic about his own privacy. He doesn’t have his own phone and has extensive security set up in his apartment. Harry is hired to record the conversation of a couple in San Francisco. This simple task takes a deadly turn when he realizes part of their chat concerns a murder. When he looks into the situation, Harry finds himself embroiled in a web of death and deceit. Who’s watching and who’s listening? The answers could be fatal. This paranoia-drenched thriller is often cited as a commentary on the Watergate scandal, but writer-director Francis Ford Coppola has noted that he wrote the script before those events took place. The Conversation is one of Coppola’s best films and features one of Gene Hackman’s finest performances. He would later pay homage to his role when he portrayed a similar character in Tony Scott’s 1998 action film Enemy of the State. Along with The Parallax View, The Conversation is among the bleakest of 1970s thrillers.

Three Days of the Condor (1975) – CIA researcher Joe Turner (Robert Redford) returns from lunch one day to find everyone in his office has been murdered. He gets caught up in a game of cat and mouse with his CIA superiors, and a mysterious assassin who is tracking him. There are conspiracies within conspiracies, and Turner’s own government seems to want him dead. Who can he trust? Faye Dunaway co-stars as a woman who helps Redford look for answers while he evades his pursuers. Sydney Pollack, who is best known for films such as The Way We Were and Out of Africa, which also starred Redford, directed this suspenseful tale. Three Days of the Condor has more in common with The Yakuza and The Firm, two other solid entries on Pollack’s resume, than those big-budget romances. Redford and Dunaway make an appealing couple, and the supporting cast (which includes Cliff Robertson, John Houseman, and Max Von Sydow) is excellent. The New York locations add depth and atmosphere to the film.

Capricorn One (1978) – There are a lot of people who think that the Apollo moon landings were staged and never really happened. Some even think Stanley Kubrick helped fake them! (Check out the documentary Room 237, which is about the hidden subtexts in Kubrick’s The Shining, for more on that idea) Writer-director Peter Hyams’ crackling 1978 action thriller concerns the first manned mission to Mars. When a critical system failure grounds the spacecraft, the decision is made to fake the flight at a TV studio, amid concerns that the NASA would lose funding if the mission is scrubbed. The astronaut crew goes along with the subterfuge at first, but things take a deadly turn when it’s determined they died upon “re-entry,” and are therefore expendable. The cast features Sam Waterston, James Brolin, Karen Black, Hal Holbrook, and Elliott Gould as an intrepid reporter who discovers that something isn’t quite right regarding the Mars mission. This fast-moving adventure isn’t as dark or serious as the other films on this list, but it’s an enjoyable popcorn flick.

All The President’s Men (1976) – Alan J. Pakula completed his unofficial trilogy of dark 1970’s tales (after Klute and The Parallax View) with this real-life conspiracy story about Washington Post reporters Bob Woodward and Carl Bernstein, and their investigation into the Watergate scandal. The film follows the duo as they unravel the myriad threads of the Watergate break-in, which lead all the way to the Nixon White House. Robert Redford plays Woodward, Dustin Hoffman portrays Bernstein, and Jason Robards is editor Ben Bradlee. All The President’s Men is a top-notch thriller with terrific direction by Pakula and excellent cinematography by his Klute and Parallax View collaborator, Gordon Willis. The Oscar-winning film is riveting and powerful, especially because it’s based on true events. Even though we know what happened, it’s a fascinating story. It turns out that real-life conspiracies are just as compelling as fictional ones.

The cinema of conspiracy doesn’t end with these films and there are many other examples of the genre, including Executive Action (1973), Marathon Man (1975), Night Moves (1975), Winter Kills (1979), Blow Out (1981), and the superb 1981 drama Cutter’s Way, starring John Heard. In a time when real-life theories of deception and subterfuge are flourishing once again, if you’re seeking a conspiracy film to watch on movie night, it shouldn’t be hard to find one.