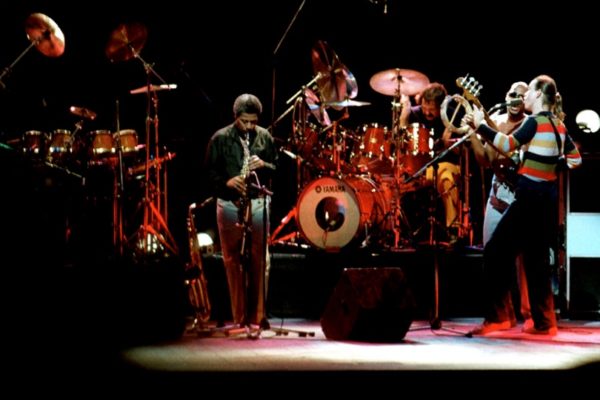 In the late 1960s rock and funk surpassed jazz as the dominant force in popular music, and many top jazz musicians knew better than to resist this sea change. They embraced the sounds and high energy of rock and funk but maintained the musical vocabulary and improvisational spirit of jazz. The resulting sound came to be called “fusion,” and it served artists and audiences alike who were seeking a deeper and richer musical experience. Fusion was immediately controversial and ultimately morphed into clumsy “formats” attempting to marry jazz and pop. But at its peak, fusion incorporated the best elements of multiple genres into something completely new. It didn’t pander to its audience, but it didn’t alienate them either. As a musician living in the internet age of endless choices, I’ve recently found myself seeking inspiration from something both familiar and adventurous. So I embarked on a “7 Day Fusion Challenge,” listening to a different fusion LP in full every day for a week and writing down my first thoughts.

I established some ground rules. First: no Miles Davis, which ruled out the too-obvious choices like Bitches Brew (1970) and In A Silent Way (1969), both considered fusion’s “origin story” LPs. Instead, I focused on the “first-generation fusion” cats from the mid-‘70s (although one title from 1981 squeaked onto the list). No “pop” records with “jazz/fusion” players on them (Steely Dan, Joni Mitchell), or “rock” groups with improvisational tendencies (Soft Machine, early Chicago). And I stuck to albums that I already owned, rather than purchasing and/or streaming anything new. This is all music that I’ve heard many times, but to which I hadn’t devoted my full attention for a while. The experience was transformative, and a wonderful exercise in time and energy management that was good for my soul.

Monday: Stanley Clarke’s Journey to Love (1975)
Bass legend Stanley Clarke made his bones with jazz luminaries like Horace Silver and Art Blakey, and he co-founded Return to Forever with keyboardist Chick Corea in 1972. His solo albums effortlessly blend a variety of styles and textures, and Journey To Love is an exciting ride through Stanley’s expansive musical mind. Of course, there’s plenty of stunning bass playing, from the percolating electric funk of “Silly Putty” to the masterful acoustic work on “Song to John.” But the true “fusion” happens on “Concerto for Jazz/Rock Orchestra, Parts I-IV” as a hot studio band of Clarke, keyboardist George Duke, drummer Steve Gadd and guitarist David Sancious commingles with majestic strings and dramatic brass stabs. This was the perfect start to my challenge, one of the best LPs from one of the best musicians of the 20th century.

Tuesday: John McLaughlin’s Electric Guitarist (1978)
The English guitarist was a key player on Miles Davis’ landmark In A Silent Way LP, and his sharp improvisational instincts made him Miles’ trusted musical comrade for decades after. On Electric Guitarist, McLaughlin abandoned the Eastern-flavored explorations of both his Mahavishnu Orchestra and the acoustic-based Shakti and surrounded himself with some of the baddest cats in both NYC and LA for some powerhouse jamming. I bought this album as a Berklee student in the ‘90s for one reason: Jack Bruce is on it, fueling an unpredictable and funky trio jam with drummer Tony Williams called “Are You The One? Are You The One?” I’m glad I kept it in the collection: With the electric guitar back in his hands and luminaries like Stanley Clarke, Chick Corea, and drummer Billy Cobham egging him on, McLaughlin burns through Electric Guitarist with a fresh intensity. A stunner.

Wednesday: Weather Report’s Black Market (1976)
Saxophonist Wayne Shorter and keyboardist Joe Zawinul founded Weather Report in 1970. Black Market, their sixth album, was made during a transitional period for the band. Both the drum and bass chairs were in flux, and there is great tension and excitement as multiple rhythm sections mark their territory. But Shorter and Zawinul somehow hold it together for a stunningly cohesive LP, with the band’s rich musical and sonic palette “fusing” elements of African music, funk, bebop, and electronic sounds. Black Market also heralds the seismic arrival of bassist Jaco Pastorius on two standout tracks: “Cannonball,” Zawinul’s emotional tribute to his late jazz mentor Julian “Cannonball” Adderley, and the ridiculously funky “Barbary Coast” that comes near the end of the album as a release to the tension.

Thursday: Jaco Pastorius’ Word of Mouth (1981)
This is my favorite Jaco album. He may have reinvented the bass guitar, but bass was the tip of the musical iceberg for John Francis Pastorius III. His muse was a conduit for anything and everything — jazz, funk, R&B, rock, Afro-Cuban, classical — and it all comes out on Word of Mouth, his second solo album (and his first for Warner Brothers after a lucrative and high-stakes record deal). I could talk about the stellar performances from cohorts like Michael Brecker, Herbie Hancock, and a prominently featured Toots Thielemans, the daring and expansive orchestral writing, and of course the primo bass work. But it’s been well-documented that Word of Mouth was an intensely personal musical statement for Jaco, and he was hurt by the album’s lukewarm reception at Warner Brothers (as well as Joe Zawinul’s tough guy dismissal of Jaco’s writing as “typical high school big band bullshit”). With all due respect, screw Warner Brothers and Joe Zawinul. If only Jaco had conquered his personal demons and not the other way around, he could have become his generation’s Duke Ellington. As a masterful glimpse of what might have been, Word of Mouth is an emotional listen.

Friday: Billy Cobham’s Spectrum (1973)
Billy Cobham’s “fusion” credentials are rock-solid: top of the NYC jazz and session scene of the late 60s and early 70s played on Bitches Brew and in the first incarnation of the Mahavishnu Orchestra. His solo debut Spectrum might just be the quintessential fusion LP: the jazz is world-class, the rock is merciless, the funk is 100% stank, and keyboardist Jan Hammer’s synthesizers still sound like visitors from the future 44 years later! Hammer and Deep Purple guitarist Tommy Bolin breathe fire, alternating between blazing solos and simmering support. Cobham’s drumming is an exercise in tension and release with furious fills that always land dead in the pocket, and bass ace Lee Sklar glues it all together. Along with two “jazzier” tracks featuring bassist Ron Carter and saxist Joe Farrell, Spectrum radiates with the fierce energy of 1970s NYC.

Saturday: The Tony Williams Lifetime’s Turn It Over (1970)
Tony Williams was pissed. After jet-propelling Miles Davis’ “second great quintet” with his revolutionary drumming, he formed The Tony Williams Lifetime with John McLaughlin and organist Larry Young in 1969 and doubled down on his former boss’s excursions into rock/funk/avant-garde turf. But Williams was frustrated when the “jazz establishment” rejected Lifetime’s “heavy” sound. He lashed out by doubling down again, adding Cream bass guitarist Jack Bruce to the band and recording the brilliant, belligerent, white-hot Turn It Over. From the back cover notes printed in a spiral that can only be read by rotating the cover (featuring the instructions “PLAY IT VERY LOUD”) to Tony’s ill-advised attempts to sing on three tracks, everything about this LP is meant to not make it easy for you. But make the effort: This is some of the most explosive, face-melting music ever made by anyone. The four musicians are thinking and playing with one mind, recklessly pushing the music to its limits but maintaining laser focus and precision. With Turn It Over, Lifetime hit the “jazz establishment” like the Barzini Family hit Sonny Corleone on the Long Beach Causeway.

Sunday: Herbie Hancock’s Thrust (1974)
If Herbie Hancock’s multi-platinum Headhunters LP is the Thriller of fusion, then Thrust is its Bad: The under-appreciated follow-up that’s leaner and tougher. Funky from the first note, Thrust boils over with thick syncopation from the rhythm section, rich harmonic motion, and juicy riffs that hit you from every direction. Herbie’s patented layered synths are otherworldly, but on tracks like “Actual Proof,” there’s also death-defying group improvisation that recalls Herbie’s daring work with Miles on Filles De Kilimanjaro (1968). Busier isn’t always better, but getting busy with Thrust (especially with headphones, as I did) is a good idea. The perfect closer to a week of fusion.

So what did I learn? In a recent interview, bassist and producer Marcus Miller pointed out that the best fusion originated from musicians who were already considered the top players in their respective fields, whether jazz (Miles Davis) or rock (Jeff Beck), and were absorbing other influences to create something new. Having immersed myself in “classic” fusion with fresh ears for a week, I agree 100 percent. I’ll even take it a step further. These seven albums contained musicians of every color and ethnicity, incorporating instruments and sounds from around the globe, and evoke the full range of human emotions. Nothing sounded out of place. If we accept Marcus’ definition of this music as the greatest players striving to achieve their fullest potential, it’s not unreasonable to suggest that fusion also demonstrates humanity’s potential for unity and harmony.

PS. Jaco Pastorius features in our post The Best Archival Albums of 2017 (So Far). Plus, you may also enjoy our post In Celebration of Prince’s Multiple Personalities.

0 comments on “The 7-Day Fusion Challenge”