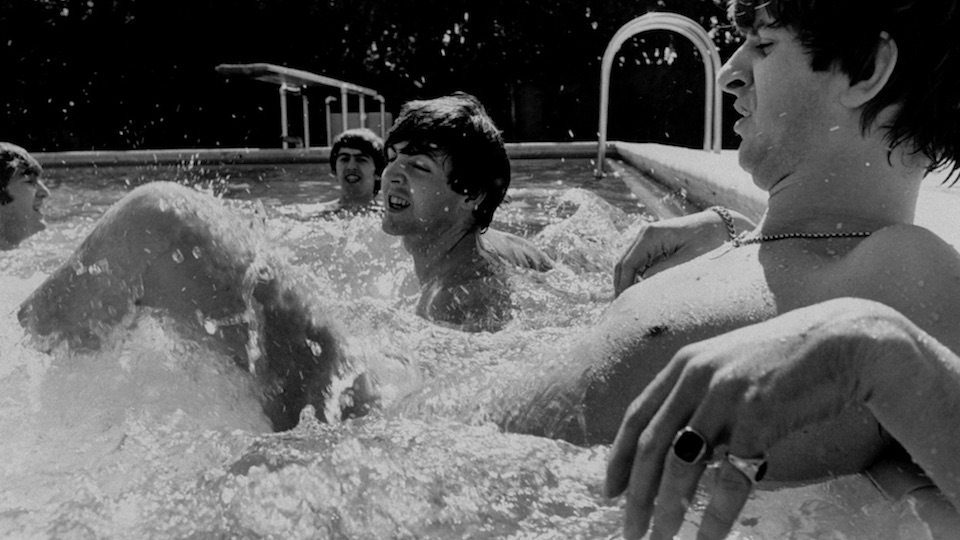 “Alexa, where is ‘Rambo 5’ showing in Dallas?” “Alexa, remind me to transfer the laundry to the dryer in 45 minutes.” “Alexa, add oregano to my shopping list.”

These are the typical, mundane requests we send Alexa’s way. We request directions, weather updates, and event info…utilitarian data. And that’s all well and good. But recently, I discovered another level of information-gathering that Amazon’s Alexa device is well-equipped to provide. “She” has been very helpful in helping me explore the historic roots of Beatles songs.

While showering and getting ready for bed a couple of months ago, I decided to ask Alexa to play songs from one particular year in John Lennon’s life. That night, I started with 1943, the year in which Julia Stanley Lennon placed her small son beside the radio when (according to Ray Coleman in Lennon) she was hired to play her banjo in a local Woolton pub. Having nothing else to do in the silent house, John listened intently to the music. And the sounds must have fused into his imagination and memory.

The year of 1943 (Alexa taught me) was filled with ditties such as Nat “King” Cole’s version of “Straighten Up and Fly Right,” a jaunty number that had overtones of later Lennon compositions such as “You Know My Name (Look Up the Number)” and “Cry Baby Cry.” Of course, no plagiarism was involved in this involuntary absorption of music; Lennon’s songs were quite different lyrically and thematically. But listen to the three tunes, and you might discover a golden, imaginative thread absorbed by the child into his subconscious and later called upon in a moment of adult creativity.

Similarly (though I was primarily interested in studying the influences on John Lennon and not the other Beatles), a tune such as “When the Lights Go on Again,” performed by Vaughn Monroe, was surely a precursor to McCartney’s later tunes such as “Honey Pie.” Sweet, sentimental, and hopeful World War II hits would have been most welcome in Jim and Mary McCartney’s cozy home, and infant Paul must have, for several years, been lulled to sleep by songs just like this.

As the war drew to a close, the sound of music changed. It grew brighter, happier. 1944’s cheerful “Accentuate the Positive,” recorded by Bing Crosby and the Andrews Sisters, has a hook that just won’t quit. And as John turned four years old, one can easily envision him playing on the hearth rug while this song filled Aunt Mimi’s parlor. Listen to it, and like me, you’ll hear the catchy, ear-worm-ish overtones later woven artfully into John’s “Power to the People.” Upbeat and almost rap-like in its lyrical quality, the Crosby song must have thrilled the toddler as he thumbed through his All About London Town picture book or drew primitive skeleton figures.

When the war ended and the soldiers returned home, love songs topped the charts. Alexa played Harry James and Helen Forrest’s version of “It’s Been a Long, Long Time” for me, and this 1945 hit certainly left its mark on The Beatles. Playing it again and again, I began to hear a hint of John’s original, slower version of “Please Please Me.” The two songs weren’t “too similar,” of course, but there appears to be an intangible link unconsciously absorbed by the kindergarten-aged child and stored away for a later date.

In the post-World War II years, music in Great Britain and America was rich and diverse. The 1946-49 Hit Parades were replete with songs from a wide variety of music genres. There were the crooners: Dean Martin, Perry Como, Tony Bennett, Eddie Fisher, Patti Page, and Frank Sinatra. Irish folk tunes were all the rage in Liverpool. Muddy Waters’s gutsy, soulful stylings dominated the charts. Hot jazz filled the airwaves. Instrumentals such as “La Vie En Rose” were extremely popular. And country and western sounds — that would later fill the grooves of the Beatles for Sale LP — were hot, hot, hot! Listen to Hank Williams’s “Move it On Over,” and you might hear the germ of what would become “The One After 909” and many other early Beatles compositions.

Each of the varied genres that reached out from the BBC touched John, Paul, George, and Ringo and made their music richer and fuller. Today, we narrowly select channels specifically designed for our particular tastes in music. We choose the Sixties Channel or Garage Band Music or Pop Rocks or The Beatles Channel or The Elvis Channel or Alternative Music, Hair Bands Music, or the Jason Mraz Station. We specialize to the extreme. But in the late 1940s and the early 1950s, the BBC offered the public — including the maturing Beatles — a vast array of songs to ingest. The boys grew up with a rich heritage of tunes. They came to maturity loving all sorts of musical strands and cultural influences, and that made their catalog an artist’s wheel of colorful melodies.

By the time John and his cohorts had reached their pre-teen and teen years, the influence of music was even more pervasive. Skiffle, a mash-up of folk tunes, blues, and jazz (and as Gerry Marsden put it, “the acky-dacky”) was booming. Burgeoning skiffle stars such as Ken Colyer’s Jazzmen and the great Lonnie Donegan inspired British youngsters to form their own bands. Almost instantaneously, over 600 primitive skiffle groups sprung up, Merseyside. One of these, of course, was John Lennon’s Quarry Men. And performing popular numbers such as “Cumberland Gap,” “Railroad Bill,” and “Puttin’ on the Style,” John boldly donned his trendy plaid, short-sleeved shirt and took to the stage at the Roseberry Street Carnival and the now-famous Woolton Garden Fête.

But skiffle wasn’t the only musical genre compelling John to make his Gallotone guitar sing. He was also influenced by the 1958 sounds of early British rock ’n’ rollers, Cliff Richard and The Drifters (later, Cliff Richard and the Shadows). Alexa played their hit song, “Move It,” for me, and it was “Point-A-to-Point-B- apparent” that Richard left his mark on tunes such as “Dizzy Miss Lizzy,” “I Wanna Be Your Man,” and later, Lennon’s “New York City.” The impressionable, teenaged Lennon was sponging up every successful sound of the moment.

The impact of skiffle and rock ’n’ roll on John Lennon has been widely acknowledged in sundry Lennon biographies. But before we proclaim that his musical heritage began and ended with these two influences, stop and ask Alexa to play the songs of 1954 for you. What you’ll hear (and what John heard on his Mendips bedroom speakers…the ones that Uncle George had installed for him) is a lush mélange of music. Dean Martin’s enchanting “Sway” vies with Perry Como’s syncopated “Papa Loves Mambo” for best dance song. But Como supplies a tongue-in-cheek lyric that must have made John grin wickedly. You’ll hear the warm sounds of Nat “King” Cole’s “Let’s Fall in Love” and Frank Sinatra’s “They Can’t Take That Away from Me.” And if you sit back and listen to Jackie Gleason’s (yes, Jackie Gleason!!) emotional “It Could Happen to You,” you might catch a hint of inspiration for John’s tender, “Goodnight.”

You’ll hear the song that John was sure would change music “once and for all,” Bill Haley’s pounding, demanding, “Rock Around the Clock.” And you can’t help smiling, listening to “Earth Angel” by the Penguins, one of John’s favorites. They’re all there…including Ray Price’s country classic, “I’ll Be There” which must have affected young George Harrison as powerfully as it did John Lennon. 1954 boasts an impressive hallway of magical doors, swinging open to song and sound.

I’m still learning from Alexa. Each night, I explore more tunes that made The Beatles, The Beatles. Recently, I stumbled upon a 1953 song called “Hey Joe” by Carl Smith that might have had an impact on the beginning of “Hey Jude.” Let Alexa play the first bar for you, and you might see what I mean. And perhaps the opening echoes of Stan Getz’s “Aguas de Marco” subconsciously supplied an instrumental gem for the very beginning of Paul McCartney’s “Yesterday.” Who knows?

The poet, Alfred Lord Tennyson, wrote, “I am a part of all I have met.” And happily, The Beatles were, touched and inspired by the music of their era. Fortunately, that music was wide-ranging, freeing The Beatles to experiment. The Boys never felt that they had to “stay in a lane.” They meandered here, there, and everywhere, as it were…stimulated by the all-inclusive sounds of their youth. And today, Beatles fans are all the better for it.

Photo of the Beatles/Getty Images

4 comments on ““Alexa, Teach Me About the Beatles””