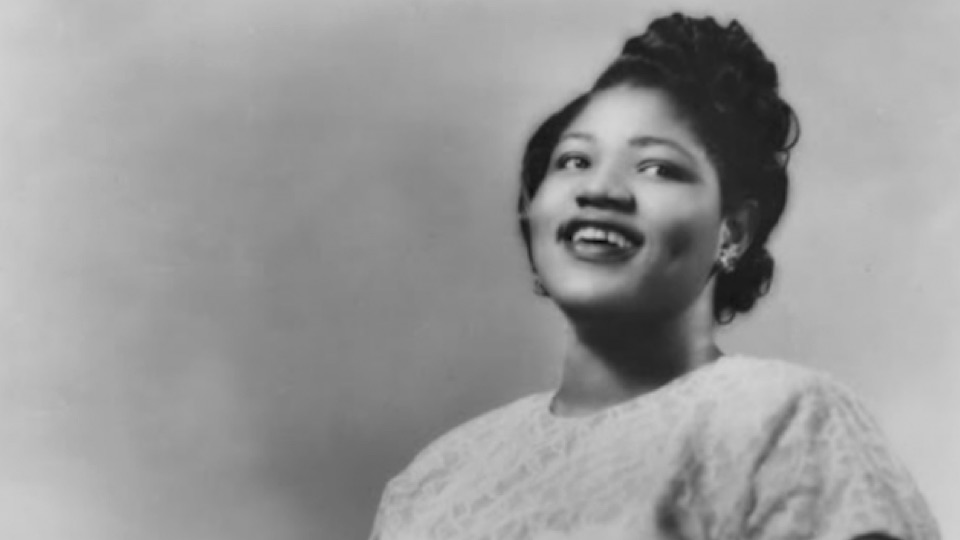 Mention the words “Hound Dog,” and inevitably an image of a pelvis-swiveling Elvis Presley leaps to mind. Four years before Presley would croon the song to a bored basset hound on the Steve Allen Show on July 1, 1956, a bawdy blues singer named Big Mama Thornton first sang the track. Her version, which exuded female empowerment and ownership of sexuality, sounded even more daring than Presley’s relatively tame reworking. In addition, the track would help launch the careers of its songwriters, Jerry Leiber and Mike Stoller. Most importantly, “Hound Dog” demonstrates the tremendous role R&B played in early rock ’n roll, both in sound and theme.

According to Hound Dog: The Leiber & Stoller Autobiography, Mike Stoller received a call from Johnny Otis, a performer, producer, and talent scout who greatly impacted R&B as well as rock. Otis had received marching orders from Don Robey, the head of Peacock and Ace Records concerning labelmate Willie Mae “Big Mama” Thornton, a hard-living singer, drummer, and harmonica player who badly needed a hit. Otis invited Stoller and songwriting partner Jerry Leiber to hear the singer rehearse. Once they heard her powerful voice, they instantly agreed to write her a song. “I saw Big Mama as the perfect instrument for just the kind of deadly blues that Mike and I relished,” Leiber wrote. In just a few minutes, the duo had composed “Hound Dog” and brought it to the singer. At first, Thornton tried singing it as a ballad, but after Leiber demonstrated the bluesy feel he desired, “she heard the rough-and-tough of the song and, just as important, the implicit sexual humor. In short, she got it,” according to Stoller.

During rehearsal, Otis played drums, turning off his snare to create a tom-tom-like sound. Another musician, Pete Lewis, re-tuned his guitar to an old Southern style. After Thornton ran down the lyrics, the group decided to record “Hound Dog” the very next day, August 13, 1952. During the recording, the songwriting duo encouraged her to growl the words. “She was a wonderful blues singer, with a great moaning style. But it was as much her appearance as her blues style that influenced the writing of ‘Hound Dog’ and the idea that we wanted her to growl it,” recalled Stoller. “Which she rejected at first. Her thing was ‘Don’t you tell me how to sing no song!’”

Thornton later stated that she made additions, mainly yells and screams punctuating the risqué lyrics. In 1990, Leiber admitted to Rolling Stone that the title phrase actually denoted “You ain’t nothin’ but a motherfucker,” an attitude which Thornton perfectly replicated. Strangely, Peacock subsequently decided to shelve the track, so Thornton quickly forgot about “Hound Dog.”

Imagine her surprise when she turned on the radio a short time later and heard her version of “Hound Dog.” “I just had to rush out to the store and buy it. Then I had to buy a record player cause I didn’t own one and sit in my dressing room, playing the record and learning the song all over again so I could include it in my show,” Thornton recalled to NME. At just 25 years old, Thornton had scored a smash hit, with the single selling almost two million copies.

In April 1956, Presley found himself in an unfamiliar situation. While he had experienced great chart success at that point, his two-week run at Las Vegas’ Frontier Hotel was proving to be a flop. Unlike screaming teenage fans, adults appeared immune to the young star’s charisma. After another dreary show, Presley decided to take in a show by Freddie Bell and the Bellboys at a neighboring hotel. There he witnessed the group’s rocked-out version of “Hound Dog.” Presley cracked up at what he deemed were silly lyrics, but expressed interest in the track. On July 2, 1956, he entered RCA Studios to record “Hound Dog,” closely following Freddie Bell and the Bellboys’ arrangement. However, he elected to change some of the lyrics, adding lines such as “you ain’t never caught a rabbit, and you ain’t no friend of mine” (this particular lyric may have originated from Bell). Other changes included substituting Thornton’s “Well they said you was high class, I can see through that” with “Well they said you was high class, but that was just a lie.”

After its July 1956 release, Presley’s “Hound Dog” became an across-the-board sensation. It topped the R&B and country charts, and gradually reached number one on the pop charts. The song initially preventing the song from topping the list? “Don’t Be Cruel,” the A-side of his own single.

Both versions share one element in common and a crucial difference. Both address an eternal rock ’n roll theme: rebellion. A crucial difference, however, lies in that rebellion. As Rolling Stone states, Presley’s snarling vocals stood as “a declaration of independence from his generation’s cold, rigid elders.” However, Thornton’s bluesy, growling, commanding voice expresses a theme heretofore unexplored in pop music: female empowerment. Here she remains firmly in control, rejecting the man’s advances and reducing him to a helpless creature. The man has been “snoopin’ ’round my door,” declaring that “You can wag your tail / But I ain’t gonna feed you no more.” The sexual connotation is unmistakable as well, with Thornton both encouraging the band and commanding her would-be lover. “Oh, listen to that there old hound dog holler / Oh, you make me feel good / Now wag your tail!” she cries as the group plays on.

Related: “Five Films: The Swivel and Sneer of Elvis Presley”

Unfairly, “Hound Dog” is better remembered today for Elvis Presley’s relatively tame version, and as Thornton later told NME, “that song must have sold two million copies—and I was paid one check for 500 dollars, and never another cent.” Still, Thornton’s original version broke new ground for R&B and early rock with its unabashed sexuality and feminist stance.