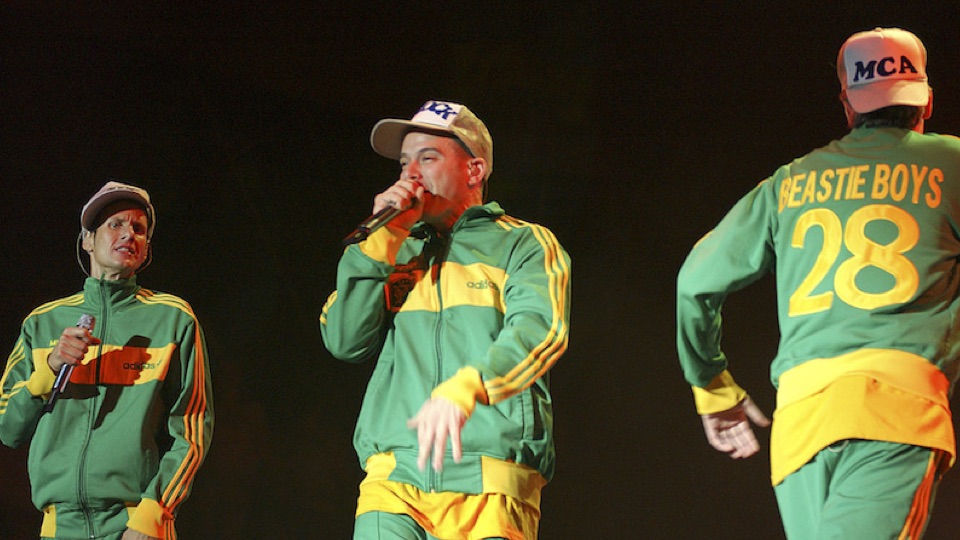 In 2019, Adam Horovitz and Michael Diamond of the Beastie Boys premiered a theatrical evening in which they got on stage and chronicled their band’s 30-year history through photographs, TV clips, animations, and home videos projected on a screen behind them. The event, in Philadelphia, was staged by Spike Jonze, who famously directly some of the Beastie Boys’ most iconic music videos, including “Sabotage.” Beastie Boys Story is the filmed “live documentary” of that stage show, shot by Jonze at the refurbished Kings Theatre in Brooklyn (and now available on AppleTV+). And although the show doesn’t feature any full-length musical performances, the documentary’s DIY format and focus on storytelling feels like it could sit nicely beside Springsteen on Broadway. It’s an opportunity for these older and wiser pop stars to look back on their careers and let us all in on what they’ve learned along the way. It’s also a way for Diamond and Horovitz to pay loving tribute to their fellow Beastie Boy Adam Yauch, known as “MCA,” who passed away in 2012. As Horovitz notes early on in the show, “When Adam died, we stopped being a band.” As such, we see the two remaining Beasties preserving and celebrating their band’s history.

Viewers might find the film’s simplistic set-up to be quite jarring at first. Completely lacking in visual fireworks, Diamond and Horovitz, dressed in khakis, look like they could be presenting a TED talk. But for fans of the group, the chance to hear these two living legends wax lyrical about their musical journey will sound like a dream come true. Perhaps too, the muted production value has something to do with how sheepishly they now recall the 25ft dick-in-a-box that was once a calling card of their live shows.

Horovitz and Diamond use a backdrop of archival footage and photographs to cruise through the fundamentals of how they stumbled into hip-hop before realizing they’d turned into the very people they mocked. We see them later reconnecting with their true selves, taking ownership of their music and their voice and evolving creatively to make powerful statements about the issues that matter to them, from feminism to a free Tibet.

Through sharing their experiences, Diamond and Horovitz also own up to some of their more shameful youthful antics, including firing their former drummer, Kate Schellenbach, because she didn’t fit their aesthetic, writing misogynistic lyrics, and of course ending their early career shows with the infamous inflatable penis. But by walking down memory lane, we see their maturing. As Horovitz says when confronting the demons of his past, “I’d rather be a hypocrite than the same person forever.”

Their story not only demonstrates the creative and professional journey the Beastie Boys embarked on in the early days of rap but also illustrates the euphoric moments of inspiration that can change entire cultures. One of the great examples of this that Diamond and Horovitz give is by recreating the delightfully low-tech way that Yauch pieced together a reel-to-reel tape recorder in order to sample Led Zeppelin’s “When The Levee Breaks” for their song “Rhymin & Stealin.” Or, how they reminisce about walking in on Yauch jamming by himself, playing the “Sabotage” bassline for the very first time.

There’s an honesty to their storytelling that makes Beastie Boys Story endearing even to rap novices, as Mike D and Adrock bumble their way through their history, offering a rare opportunity for two artists to track their own personal, creative and moral evolution. There are jokes throughout, there are wild tales of finding their feet, and there is, of course, incredible music. Above all, however, there is heart, with the band’s lifelong love and respect for each other shining through in every anecdote.

In a lot of ways, the whole documentary feels like a tribute to Adam Yauch, the original founder of the band who was lost to cancer in 2012. Diamond and Horovitz address his absence from the start, but he is very much felt throughout the entire film. The most moving part of the documentary comes towards the end, when Horovitz reflects on their headline show at Bonnaroo in 2009 that, unbeknownst to them, would be their final performance together. Horovitz can’t quite bring himself to keep talking, having to pause several times in order to collect himself. There’s a real sense that he’s not just in mourning for his friend, but that he’s completely overwhelmed by the entire journey they all went through.

For many people watching Beastie Boys Story, the overriding theme of the film will be Time. What it does to us and how we deal with our past in relation to our present. The friendship of the band makes you feel for them and their story, but also lets you reflect on your own life, your friends, and the families you choose. It’s about love, loss, learning, and embracing change. It’s also about having a lot of fun. They may not be fighting for their right to party anymore, but the Beastie Boys remind us that there’s so much more to life than eternal youth. They teach us to fight for our right to be our authentic selves.

0 comments on ““Beastie Boys Story”: Fighting for The Right To Be Themselves”