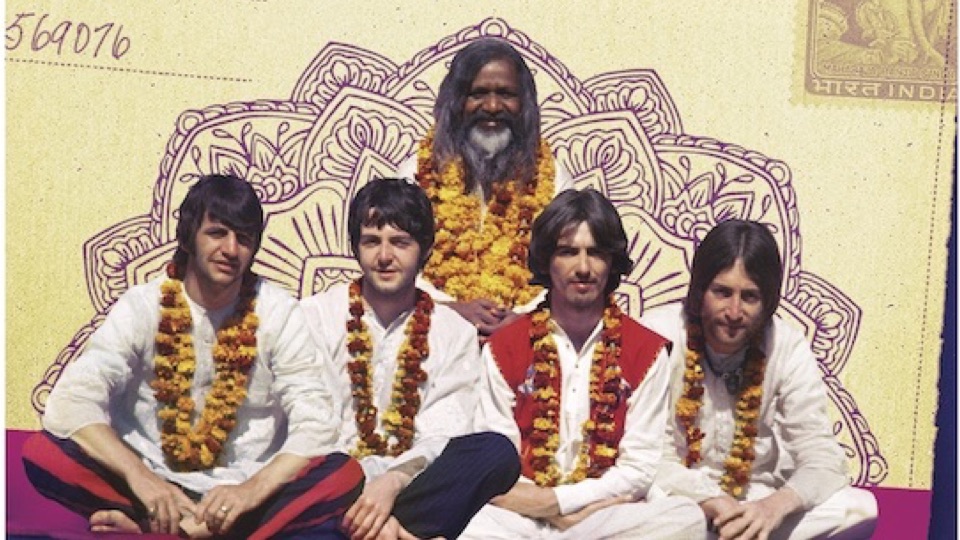 Editor’s Note: This is a little taste of our upcoming virtual debut of Meeting the Beatles In India, part of our series, The Screening Room. Info on purchasing tickets follows, so hope you’ll join us!

In February 1968, the Beatles traveled to Rishikesh in India to embark on an extended study of Transcendental Meditation with the Maharishi Mahesh Yogi. They weren’t alone; fellow musicians on the journey included Mike Love of the Beach Boys and Donovan.

While the Beatles were there to train in TM, it proved to be a  prolific time for them when it came to writing songs, many of which wound up on The White Album. Ringo finished a song he’d begun all the way back in 1963, “Don’t Pass Me By.” Paul kept things light by performing songs for his fellow guests, including “Rocky Raccoon” and “Back In The U.S.S.R.” George was studying sitar, and also came up with the bones of “While My Guitar Gently Weeps.”

While Donovan was sketching out future hits of his own like “Hurdy Gurdy Man,” (with some help from Harrison), he had a particular impact on two other Beatles.

Attendees had been limited to bringing only acoustic guitars on the long journey and spent the time away from their TM training working on music. Donovan recalls that John was intrigued by a particular style of fingerpicking he’d picked up along the way, one rooted in a mixture of blues, flamenco, and classical styles — and asked to be taught. Lennon worked diligently at it, ultimately using it in White Album songs including “Julia” and “Dear Prudence.”

For his part, Paul dipped in and out of Donovan’s instruction. Donovan notes that Paul’s incredible “ear” for music helped him pick up a version of the technique very quickly, and it can be heard on “Blackbird” and “Mother Nature’s Son.”

Related: “Inside Story of the Beatles’ Lyrics On ‘The White Album'”

Considering the contributions that Donovan wound up making to The White Album, is there a case to be made that he was – at least for a time – a “5th” Beatle?!

[Learn even more about this turning point for The Beatles. Meeting The Beatles In India will have a “virtual premiere” on 10/9 — John Lennon’s birthday! – with audience interaction, merch, and much more. Click here to purchase tickets.]

2 comments on “The Screening Room: “Meeting the Beatles In India””