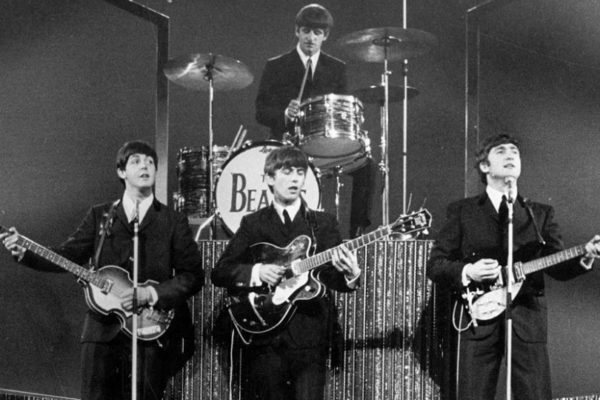 The 2014 release of The Beatles’ The US Albums box set re-ignited a hot topic among die-hard Beatles fans: the pros and cons of Dave Dexter, the Capitol Records executive who prepared The Beatles’ LPs for the American market in the 1960s. In the decades since then, a narrative has emerged that the UK Beatles albums are actually the “correct” ones and that Capitol crassly tampered with “the creative intentions of the band.” But the fact is that Dave Dexter’s handiwork on The Beatles’ behalf has had an impact on American culture that resonates to this day. It’s high time we give him his due.

Dave Dexter Jr. was born in Kansas City, Missouri in 1915. He started his career as a music journalist, championing the jazz scene of the ‘30s and ‘40s. “Dex” — as he was known among jazz musicians — joined Capitol Records in 1943 and worked his way up to the A&R department where he signed such legendary artists as Frank Sinatra and Duke Ellington.

Steeped in jazz as he was, Dex hated rock and roll. He also knew that pop records from the UK didn’t sell very well in America. So when he heard the first Beatles recordings in 1962, he was unimpressed and rejected the band in defiance of Capitol’s parent company (EMI). But by late 1963, The Beatles were an international phenomenon that couldn’t be ignored any longer. There are conflicting accounts about Capitol’s decision to finally release “I Want to Hold Your Hand” as a single in the US; Dex claimed he heard the record himself on a trip to England and knew “after the first four bars” that this one was a hit. But Capitol’s then-president Alan Livingston said that they simply bowed to increased pressure from EMI and Beatles manager Brian Epstein.

Dex understood the American record market. He knew that the UK Beatles albums, with their subtle, artsy cover photos and astute liner notes would not grab the attention of American teenagers. He replaced them with splashy photo collages and BIG, BOLD TYPE, USUALLY IN ALL CAPS, WITH ADJECTIVES LIKE “ELECTRIFYING” AND “PHENOMENAL” AND PLENTY OF EXCLAMATION POINTS!!!! He also tweaked the music itself, changing the EQ and adding reverb and compression to make The Beatles positively jump out of American transistor radios, car stereos, and phonographs.

Dex took even greater liberties with the track listings. In Britain, Beatles albums contained 14 songs each, and never included singles. (EMI refused to make British fans buy the same song twice.) But in America, anything above 11 songs on an LP meant higher royalty payments to the artist, and singles were used to drive album sales. So while EMI in Britain released seven Beatles albums and thirteen singles between 1962 and 1966, it only took Dex half as long (from 1964 to ‘66) to carve all that material into ten Beatles LPs for Capitol!

His motivations might have been strictly commercial, but Dex succeeded artistically as well (in this writer’s opinion). Meet The Beatles perfectly captures the initial rush of February 1964 Beatlemania. The Beatles Second Album is a 27-minute dose of kick-ass rock and roll. And 1966’s Yesterday And Today might be a mishmash of leftover tracks spanning the year between 1965 and‘66, but every single one of them is a winner. Such was his influence on the way an entire nation heard their music, Dave Dexter was (dare I say it) the American Fifth Beatle, even if he didn’t realize it himself.

But it’s not easy pleasing the record-buying public and your corporate overlords at the same time. Dex often clashed with Capitol management over their perceived errors in his judgment. He passed on other English acts like The Animals and Manfred Mann, and despite growing protests from The Fab Four and Brian Epstein, he refused to use the UK cover art and track listings, claiming that his methods were better suited for the American market.

It wasn’t until 1967, with the release of the landmark Sgt. Pepper’s Lonely Hearts Club Band album and a re-negotiation of The Beatles’ recording contract, that the group’s albums remained intact after they crossed the Atlantic. Dex’s role at Capitol Records diminished over the years and he eventually left the company in the mid-1970s. He returned to music journalism, and was a frequent contributor to Billboard Magazine. In late December of 1980, three weeks after John Lennon’s murder, Dex wrote an infamously harsh editorial criticizing Lennon for being stubborn and difficult to work with. (Lennon apparently complained loudly and often about Capitol’s handling of the US albums.) Dave Dexter passed away himself in 1990, but his contribution to The Beatles’ legacy cannot be overstated.

When Brian Wilson says that Rubber Soul inspired him to make Pet Sounds, he’s referring to the folkier, acoustic-heavy American version that Dex assembled. Other American artists with overt Beatles influences — from The Byrds to Tom Petty — also got their initial Fab Four fix from Dex and Capitol. Those “hodgepodge” LPs created millions of American sense memories, and they sound and feel damn good all these years later. Forget “the band’s intentions” for a moment. Dex’s job was to sell that music to the American public, and by expertly anticipating the needs of the US market he succeeded beyond all expectations. Long live Dex!

PS. Another argument that may never end – who’s the real Fifth Beatle? Check out some of top contenders here.  With the 50th anniversary of Sgt. Pepper now in the rear view mirror, you may also enjoy our post on how its famous album cover came to be.

59 comments on “Stop Knocking the American Releases of The Beatles, Already”