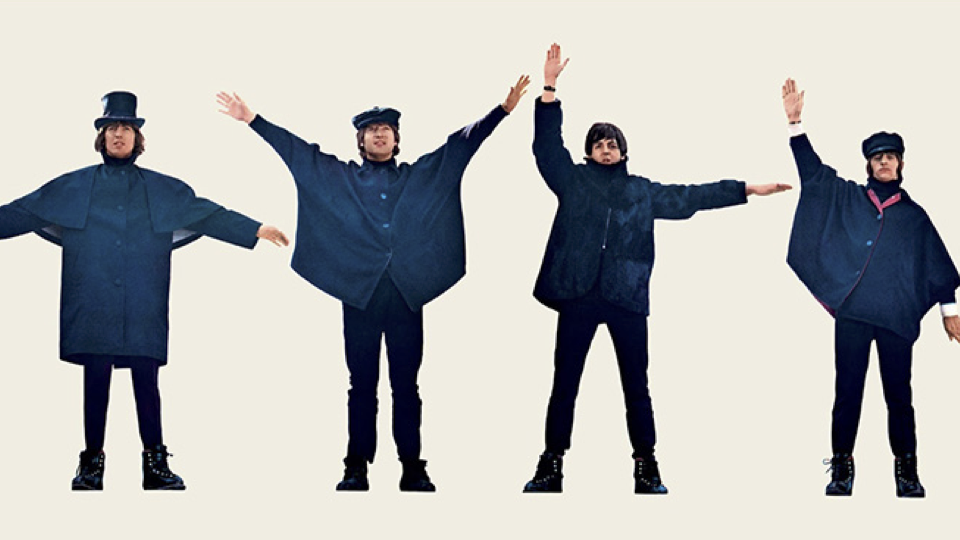 The four bored musicians staring out from the cover of Beatles for Sale, the Beatles’ fourth album for Parlophone Records released in December of 1964, were a far cry from the goofy faces that adorned their previous album, A Hard Day’s Night. On the earlier album, Lennon and McCartney had written all thirteen songs, half of which appeared in the critically acclaimed movie of the same name. They were riding high with their fanbase finally extending to America, and their music becoming more harmonically and lyrically adventurous.

So it was slightly disappointing to see the Beatles’ follow-up album return to their earlier formula of half originals, half covers. Together with the cover art, it showed how the endless demands of Beatlemania – the countless concerts, press conferences, photo sessions, TV appearances, and recording dates – were taking their toll on Messrs. Lennon, McCartney, Harrison, and Starr.

Nevertheless, Beatles For Sale had some of Lennon and McCartney’s best songs to date. The creation of the album and its follow-up, Help! are the topics of the latest Deconstructing the Beatles film, Deconstructing Help!

Beatles for Sale opened with three strong originals, starting with the Lennon rocker “No Reply,” a song written several months earlier that was originally intended for Tommy Quickley, part of manager Brian Epstein’s growing stable of artists. This was followed by “I’m A Loser,” a look into Lennon’s then-current mindset and a precursor to the more desperate “Help!” These two songs were followed by the waltz “Baby’s In Black,” one of the darkest love songs Lennon and McCartney had written to date.

“I’ll Follow the Sun” dated back to McCartney’s pre-Beatles day. With a new bridge and no percussion (other than Ringo slapping his knees), the song is one of the album’s standouts. “I Don’t Want to Spoil the Party,” a fun takeoff on Lesley Gore’s “It’s My Party,” was an example of the country music sound that would frequently find its way into the Beatle’s more acoustic songs. “Every Little Thing” gave Ringo a chance to learn a new instrument, the timpani. “What You’re Doing” reflected McCartney’s often-stormy relationship with Jane Asher that was the inspiration for several of McCartney’s songs in 1964 and 1965.

In England, the Beatles left their singles off of their albums. Had they added “I Feel Fine” and “She’s A Woman” to Beatles for Sale, the songs from their December single, the album might have been even stronger. “Eight Days A Week,” which opened Side Two of the album, was released as a single in several other countries, including America and Canada, and became an international #1 hit.

The Beatles could have played the six cover songs on Beatles for Sale in their sleep. In fact, they recorded most of them in a single day. That didn’t stop them from producing some iconic versions of these songs. “Everybody’s Trying to Be My Baby” and “Honey Don’t” honored one of the Beatles’ influences, Carl Perkins, and featured the slapback effect Perkins used on the originals. The Beatles first saw Little Richard perform a medley of “Kansas City” and “Hey-Hey-Hey-Hey” in 1962, and the Beatles adapted it for their live shows. They finally committed it to vinyl on Beatles for Sale.

Having addressed two of their heroes, they offered tributes to two more – Buddy Holly with “Words Of Love” and Chuck Berry with “Rock and Roll Music.” Only the rarity from Dr. Feelgood and the Interns, “Mister Moonlight,” was a questionable cover. The song “Leave My Kitten Alone,” which was left on the cutting room floor, would have been a better choice.

Image from The Beatles’ Help