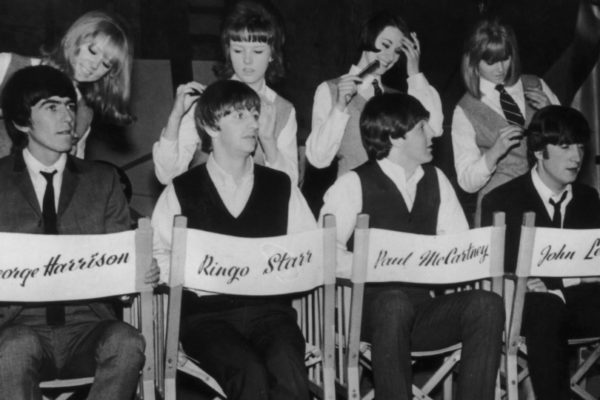 Let’s put aside their individual mega-hits post-breakup like “Imagine,” “Band on the Run,” and “Got My Mind Set on You.” Let’s also take out of consideration such memorable covers as Marvin Gaye’s exquisite rendition of “Yesterday” and The Fifth Dimension’s rockin’ “I’ve Got a Feeling.” Instead, let’s focus specifically on the official videos on YouTube — in particular, on The Beatles Vevo channel. What are people watching when it comes to Fab Four songs? Well first and foremost, it is not “Let It Be.” Below is a list of the five music videos with the most views to date on Vevo. At least so far…

1. “Don’t Let Me Down”: 88 million plays and counting
It might not feature their most beloved song or their most popular one but this video does commemorate the Fab Four’s final public performance via their immortal rooftop concert at Apple Studios in London circa 1969 — with both Lennon and Harrison decked out in furs, McCartney sporting a thick beard, and Ringo upstaging them all with his red plastic jacket. Pay close attention and you’ll spot Billy Preston accompanying the guys on the keyboards, too.

2. “Hey Jude”: 74 million plays and counting
First seen on the fairly short-lived Frost on Sunday on LWT (a.k.a. London Weekend Television) in 1968, this video encored in America on The Smothers Brothers Comedy Hour later that same year. Stick around past the 47-second intro and you’re brought up close to McCartney’s face singing straight into the camera, with some cut-aways to the other band members — most memorably a gum-chewing Lennon who looks to be making faces at McCartney at one point in an attempt to make him laugh. The emergence of a studio audience onstage at the end doubles as a time capsule of period fashions.

3. “Hello, Goodbye”: 56 million plays and counting
The eye-popping, candy-colored, silken military uniforms of Sgt. Pepper‘s fame may partially distract you from some lip syncing that doesn’t always sync up and those preposterous hula dancers who suddenly pop up at the end. This is actually one of a trio of videos that McCartney himself directed for the song and it debuted on The Ed Sullivan Show in November 1967. (It was banned on Britain’s Top of the Pops because of its illegal use of miming!)

4. “A Day in the Life”: 48 million plays and counting
Given the song pays homage to avant-garde titans John Cage and Karlheinz Stockhausen among others, the video’s experimental feel — part light show, part cinema verite, part family home movies — feels perfectly appropriate. Quick glimpses of Mick Jagger and Keith Richards amid a montage of increasingly hallucinatory power adds a layer of glamor. Why are the tuxedoed orchestra members wearing strange noses and silly hats? Because they were asked to!

5. “Penny Lane”: 44 million plays and counting
Deemed by none other than the Museum of Modern Art to be among the most influential music promos of its time, this 1967 short was helmed by Peter Emmanuel Goldman, a now largely-forgotten director who Susan Sontag referred to as “the most exciting filmmaker in recent years.” So decades before MTV came into existence, The Beatles were ahead of their time in yet another art form: the music video.

2 comments on “Ready for Their Closeups: The Top 5 Beatles Music Videos”