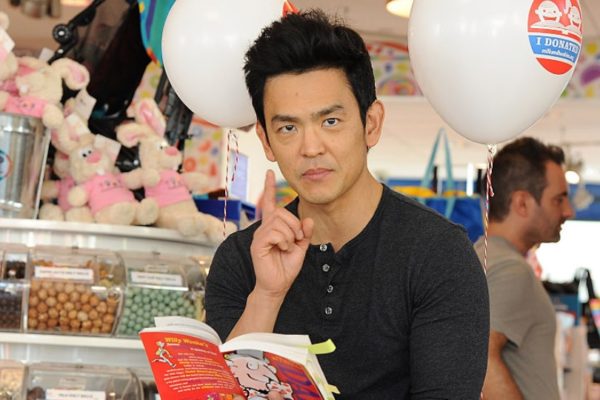 With the new independent gem Columbus, actor John Cho shows for the umpteenth time why #StarringJohnCho has gone viral before on social media and is likely to do so again. The eponymous hashtag brought to light the dearth of Asian leading men in Hollywood and called for greater diversity in entertainment. It also lasers in on the absurdity of Cho only now starring as the dramatic lead after 20 years in the business. Given his track record in both comedies and dramas, this actor should have gotten top billing much sooner. Here are five Cho movies that prove our point. For the record, we’re on board for much more #StarringJohnCho in the near future:

1. Columbus (2017)
In the elegantly minimalist indie debut of video essayist Kogonada, Cho’s leading man charms are in full effect. Here he plays Jin, an estranged son whose brilliant architect father has fallen into a coma in Columbus, Indiana. It would be easy for the performer to fall into the usual “estranged son” stereotype — a character wallowing in the bitter and the morose — but Cho deftly avoids this by injecting humor and allowing for glimpses of vulnerability, awkwardness, and occasional “jerk-dom” at just the right moments. In short, Cho makes Jin wonderfully human while showing us the very real pain of dealing with a dying parent.

[amazon template=right aligned image&asin=B00AZMFK3K]2. Star Trek Into Darkness (2009)
Cho takes the character of Sulu (originated by George Takei) in this JJ Abrams reboot and shapes it into something irrevocably his own. Even with his character’s trepidations about sitting in the captain’s chair for the first time, Cho remains sharp, sexy, and in control. Watching this Sulu take charge of The Enterprise — and tell off the enemy — is enough to make you wonder when he’s going to command a ship of his own. As Bones says, “Mr. Sulu, remind me never to piss you off.” Nope. Not if you know what’s good for you.

3. Harold & Kumar Go to White Castle (2004)
This hilarious part-stoner, part-action buddy-comedy found Cho and co-star Kal Penn making audiences laugh from beginning to end. Cho’s comedic chops are in peak form: his straight man is the perfect complement to Penn’s more outlandish antics. Rolling Stone put it perfectly when they said, “…unlike a lot of cinematic potheads, these buds are actually bright, articulate and sensitive dudes. Which doesn’t mean they can’t get some serious munchies … or experience crazy drug-fueled trips.” This iconoclastic comedy proved popular enough to spawn the two sequels: Harold & Kumar Escape from Guantanamo Bay and A Very Harold & Kumar 3D Christmas. Not bad for a couple of stoners.

4. Better Luck Tomorrow (2002)
Even when he’s playing an a-hole, Cho seems to be having such a great time that the audience actually roots for him. A stellar example of this is his turn as swarmy Steve Choe in Better Luck Tomorrow helmed by director Justin Lin (The Fast and the Furious). Steve may get what he deserves in the end, yet for some reason, we still want him around. Now that’s charisma. Watch and see for yourself.

PS. The aforementioned Justin Lin is one of the directors featured in our post 5 Asian-American Filmmakers That Should All Be Household Names. Plus, you may also enjoy our post Fans of Asian Cinema Know: Ain’t Nothing Like the Real Thing, Baby.

0 comments on “Why #StarringJohnCho Is and Should Be a Thing”