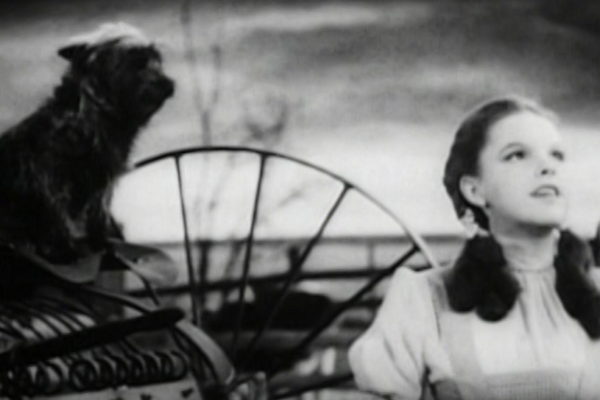 Since the seventh Academy Awards back in 1934, Hollywood elites have been giving out gold-plated, mostly-bronze statuettes for the Best Original Song. This year, the doubly-nominated La La Land may be favored to win, but an upset by Justin Timberlake, Sting, or Hamilton‘s Lin-Manuel Miranda isn’t out of the question. Oscar doesn’t always get it right but sometimes the little bronze dude is on point. For some examples, let’s take a look back at the ten best Oscar-winning songs of all time. Here are times when the Academy of Motion Picture Arts and Sciences got it right. Cue the music.

10. “(I’ve Had) The Time of My Life” — Dirty Dancing (1987)
My younger sister watched Dirty Dancing eight billion times when we were kids. And while I was too busy blowing up G.I. Joe figures to notice Baby’s and Johnny’s dance-infused love story, the movie and its award-winning anthem clearly cast a spell over millions. Recorded by Bill Medley (of The Righteous Brothers) and Jennifer Warnes (a frequent collaborator of Leonard Cohen), the tune and the rapturous finale it accompanies (with Swayze’s slo-mo leap from the stage!) has undeniable power.

9. “Falling Slowly” — Once (2007)
Writer-director John Carney (Begin Again, Sing Street) took Glen Hansard’s and Marketa Irglova’s songs as inspiration for his Dublin love story. He then cast the songwriting pair as, respectively, a street busker and flower seller who meet and make sweet music together. Hansard and Irglova not only co-starred but also fell in love during production. The song earned universal praise for its affecting sincerity, spawned a successful Broadway musical, and transformed the duo into international stars. (Sadly they broke up just two years later; ah, well.)
[amazon template=right aligned image&asin=0789211424] 8. “Raindrops Keep Fallin’ on My Head” — Butch Cassidy and the Sundance Kid (1969)
One of cinema’s most iconic scenes involves a bank robber, a bicycle, and a Hal David-Burt Bacharach tune. Recorded by B.J. Thomas, who reportedly had laryngitis at the time, the song adds a hopeful note to the legendary story of doomed outlaws in the Old West, while the instrumental section gives Paul Newman a chance to show off some bicycle stunts for leading lady Katharine Ross.

7. “Theme from Shaft” — Shaft (1971)
Who’s the private dick that’s a sex machine to all the chicks? That’s a rhetorical question, of course, because we all know the answer by now. One of the most played (and parodied) songs in movie history, Isaac Hayes’ soul-funk overture introduced detective John Shaft (Richard Roundtree) and helped mainstream 1970s blaxploitation. Hayes made history himself as both the first African-American to win this Oscar category and the first artist to write and record the winning song. Can ya dig it?

6. “Lose Yourself” — 8 Mile (2002)
Love him or hate him (or his alter ego Slim Shady), Eminem produced a stunning track about persistence and seizing opportunity for his semi-autobiographical 8 Mile. Recounting much of the biopic’s plot in verse, Eminem tapped his trademark aggression and found the deep core of personal truth underneath. The song beat out music legends U2 and Paul Simon, pummeled Billboard charts, broke a Guinness Book world record, and became the first rap song nominated for Song of the Year at the Grammys.

5. “Can You Feel the Love Tonight” — The Lion King (1994)
While most of the score serves a narrative purpose, Elton John’s rousing rendition during the end credits was catapulted to Oscar glory. Nominated also for “Circle of Life” and “Hakuna Matata,” Sir Elton and lyricist Tim Rice were destined to take the crown that year. The multi-platinum soundtrack shattered sales records, earned Elton his third Grammy, and launched a royal songwriting duo that has since scored big on Broadway. (They also won Tonys for Aida.)

4. “My Heart Will Go On” — Titanic (1997)
An epic love story about an epic boat requires an epic theme song, and Celine Dion, as we all know, delivered. Belting out notes like a turn-of-the-century steamer headed for certain doom, Dion melted icy hearts and turned them into salty tears. With music by composer James Horner and lyrics by Will Jennings (who co-wrote the devastating “Tears in Heaven” with Eric Clapton), this ode to the endurance of the human heart will most certainly go on.

3. “Let It Go” — Frozen (2013)
Inspiring more theme parties and sing-a-longs than any other film in the history of humankind, Frozen unleashed a blizzard of devoted fans and put a much-needed feminist spin on an outdated form. Husband-and-wife team Kristen Anderson-Lopez (Winnie The Pooh, In Transit) and Robert Lopez (Avenue Q, The Book of Mormon) wrote the standout melody, and Broadway legend Idina Menzel brought it to life. I’m tearing up now just thinking about it.

2. “When You Wish Upon a Star” — Pinocchio (1940)
You won’t find a six-legged arthropod with a better singing voice than Jiminy Cricket in Disney’s Pinocchio. Voiced by singer Cliff Edwards and composed by Leigh Harline and Ned Washington, “When You Wish Upon a Star” encourages everyone to keep dreaming — even if you’re a wooden puppet — and became an enduring anthem of the Disney brand.

1. “Over the Rainbow” — The Wizard of Oz (1939)
Judy Garland’s signature song and one of the most enduring tunes of the 20th century almost didn’t happen. MGM head Louis B. Mayer cut the song after a test screening because it was “too sad.” Only after producers threatened to quit was it put back in. Written by Harold Arlen and E.Y. Harburg, the ballad gave Garland a chance to shine as Dorothy, the young girl who dreams of a place free from trouble, a place that must be far, far away. Still valid today.

PS. For a somewhat related list, see CultureSonar’s post on songs from movies that took home a Grammy.