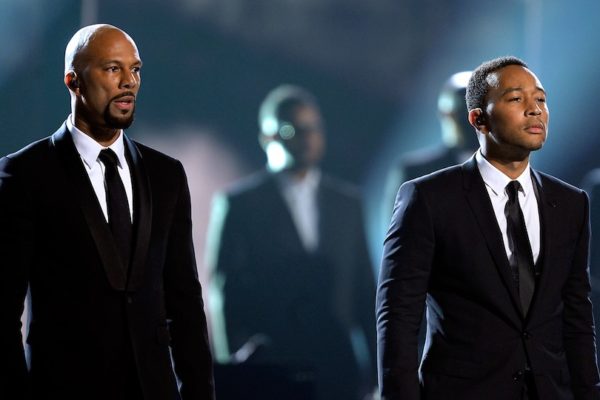 You’d think the Grammy Awards would’ve been paying tribute to songs from the movies and television since the beginning. After all, the Academy of Motion Picture Arts and Sciences has been handing out Oscars for Best Original Song since 1934. (The winner that year was “The Continental” from The Gay Divorcee, in case you were curious.) But the music industry has been slow to follow. In fact, the Grammy Award Best Song Written for Visual Media didn’t start until 1988, at which time it had the infinitely less awkward title of Best Song Written Specifically for a Motion Picture or Television. The nominees for 2017 range from Justin Timberlake to Skrillex to Peter Gabriel, but if they had to compete with winners from years past, they’d have some stiff competition. Here are the ten best so far…

10. “Let It Go,” Frozen (2015)
Husband-wife team Kristen Anderson-Lopez and Robert Lopez penned this anthem about finding strength through self-acceptance, which became a global phenomenon. “Let It Go” stayed on the charts for two years while being covered in almost a dozen languages around the world. Though overplayed now to the point of an eye-roll, the truth is that even when hummed under your breath this song will never fail to elevate your spirits.

9. “Glory,” Selma (2016)
[amazon template=right aligned image&asin=B01MSVIVW3] If you weren’t crying at the end of Selma, this song would ensure you were sobbing as the credits rolled. Sounding at once contemporary and classic, this tune by Common, Che Smith and John Legend honors the continuing struggle of the Civil Rights movement while driving home the message that change is possible as long as we continue to fight.

8. “Jai Ho,” Slumdog Millionaire (2010)
Using a Hindu phrase which roughly translates as “Let there be victory” as the title, renowned Bollywood film composer A.R. Rahman wanted to “create a vision of the whole world celebrating this victory.” The lyrics are a mix of Hindi, Punjabi, and Urdu; the melody nods to Arabic, Japanese and Spanish influences. A worldwide hit, “Jai Ho” was accompanied by an exhilarating dance in the film, making it all the more irresistible.

7. “Boss of Me,” Malcolm in the Middle (2002)
First off, anytime They Might Be Giants wins an award is a good thing. Their theme song for the television series Malcolm in the Middle – the only time a TV show has picked up this prize! – is a complicated layering of teen angst and ageless humor. This would become one of the band’s best-known singles. You’re not the boss of me now, and I’ve got an award to prove it!

6. “When She Loved Me,” Toy Story 2 (2001)
Animation often inspires great music. Case in point is the song for this Pixar sequel; songwriting stalwart Randy Newman’s gem deals with feelings of being left behind in a way that even children can understand. The feels never fail to come whenever this one comes over the airwaves. Need a good cry? Put this one on your Spotify queue.

5. “Streets of Philadelphia,” Philadelphia (1995)
Though some were surprised when The Boss canceled his concert in North Carolina to show solidarity with the transgender community, anyone following his career closely already knew Bruce Springsteen has been a longtime advocate of LGBTQ rights. His haunting song for Philadelphia won him an Oscar for best song as well as this Grammy. Additionally, Sony put it on their list of All-Time Greatest Movie Songs. We heartily agree.

4. “A Mighty Wind,” A Mighty Wind (2004)
[amazon template=right aligned image&asin=B002HMHSJ0] Christopher Guest and Michael McKean already had some experience writing songs for This Is Spinal Tap, but enlisting comic genius Eugene Levy for their composing process took their lampoonery to a whole other level. Listen to this folksy, tongue-in-cheek parody and just try not to laugh. Not possible.

3. “Under the Sea,” The Little Mermaid (1991)
This peppy ditty from the unstoppable Alan Menken and Howard Ashman (the duo behind Little Shop of Horrors and Aladdin) never fails to put kids of all ages in a really, really good mood. The two actually won this award a second time for the theme song from Beauty and the Beast, but this first effort shows the team at their very best. So damned catchy!

2. “Let the River Run,” Working Girl (1990)
This eternally appealing feminist comedy opens and closes with this original song composed, written, and sung by the iconic Carly Simon who’d won a Grammy nearly 20 years before this for Best New Artist. She’s been quoted as saying she saw “Let the River Run” as “a hymn to New York with a jungle beat under it.” In 2009, she would actually re-record it and perform it at the World Trade Center on the anniversary of 9/11.

1. “Somewhere Out There,” An American Tail (1988)
Sometimes the first is the best. This mega-hit (originally performed by Linda Ronstadt and James Ingram for The Secret of NIMH sequel) became the most popular film song since the 1950s, and was covered by everyone from Liza Minnelli to Troy (Donald Glover) and Abed (Danny Pudi) in an episode of Community. No doubt more future covers lie ahead. We look forward to them all.

PS. Speaking of movies and music, you may also enjoy our posts How to Listen to “20th Century Women,” Songs for the End of the World, and 6 Great Indie Film Soundtracks You May Have Never Heard.

1 comment on “When the Grammys Weigh in on the Movies…”